A Marine colonel who walked free after a military appeals court decided it did not believe the 6-year-old girl whom he was convicted of sexually assaulting will retire as a lieutenant colonel with a less than honorable characterization of service, the Marine Corps confirmed on Wednesday 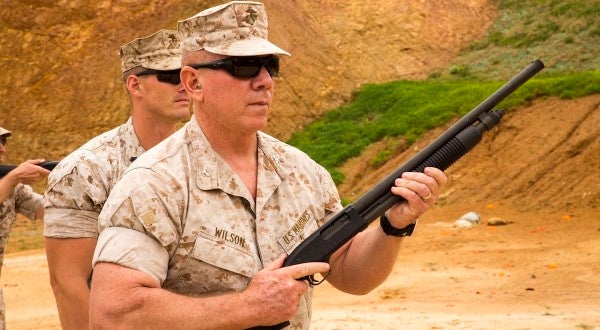 A Marine colonel who walked free after a military appeals court decided it did not believe the 6-year-old girl whom he was convicted of sexually assaulting will retire as a lieutenant colonel with a less than honorable characterization of service, the Marine Corps confirmed on Wednesday.

Wilson was sentenced to more than five years in prison in September 2017, but the Navy-Marine Corps Court of Criminal Appeals overturned Wilson's sexual assault conviction in July because it found the alleged victim's testimony inconsistent.

Wilson was released from the brig in October.

Marine Corps Times reporter Philip Athey first revealed that Lt. Gen. Michael Rocco, head of Marine Corps Manpower & Reserve Affairs, did not focus on Wilson's overturned sexual assault conviction when deciding the rank at which Wilson would retire and the type of discharge he would receive.

In doing so, Rocco overruled Lt. Gen. Brian Beaudreault, the commander of II Marine Expeditionary Force, who had recommended that Wilson retire as a major with an other than honorable discharge, according to Marine Corps Times.

The three-judge panel that overturned Wilson's sexual assault conviction in July found the 6-year-old girl's testimony about how Wilson had allegedly abused her was “fatally inconsistent … in non-trivial ways that cannot solely be attributed to her young age.”

“Faced with multiple descriptions of possible contacts—only some of which are consistent with guilt—we cannot find guilt beyond a reasonable doubt based solely on statements,” the judges wrote in their decision.

Cases such as this show that the military desperately needs to reform its justice system so that convicted sexual offenders do not walk free, said retired Air Force Col. Don Christensen, president of Protect Our Defenders, an advocacy group for victims of sexual assault in the military.

“The fact that the military insists on having this archaic process because they don't trust the results of the courts tells me that the military knows that there needs to be reform of court-martial process, yet they refuse to do it,” Christensen told Task & Purpose. “The people paying the price for that are the victims.”

Wilson is now expected to file federal lawsuits against the alleged victims and the U.S. military, alleging defamation of character and malicious prosecution, said his attorney Andrew Cherkasky.

“He also plans to write books about his experiences,” Cherkasky wrote in a statement to Task & Purpose. “'A Jury of Cowards' will discuss his case, and recommendations for fixing the military legal system. A second book, 'XXXXL', will detail his experiences in three different military prisons, and his recommendations for fixing the corrupt military prison system.”