"Reaching a decision to close the investigation with no criminal charges does not mean that the underlying allegation is unsubstantiated." 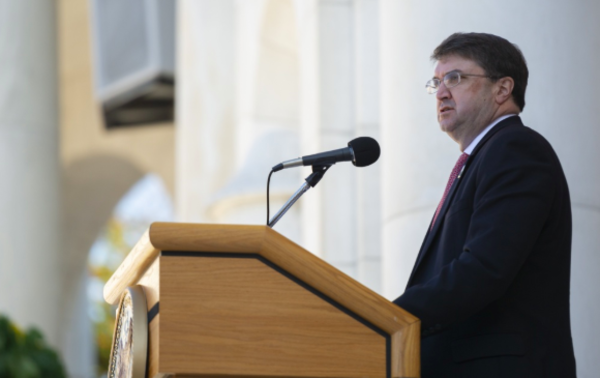 The Department of Veterans Affairs’ Inspector General pushed back against Secretary Robert Wilkie last week, after Wilkie called an allegation of sexual assault in a D.C. facility “unsubstantiated.”

At the VA Medical Center in Washington, Goldstein said, a man “pressed his entire body” against hers and told her she looked like she “could use a good time,” per a separate New York Times report. She said that despite reporting it immediately to staff at the D.C. facility, the police weren’t notified until she got to see her doctor, Military.com reported.

Committee officials told the Times that “video cameras at the hospital that might have captured the episode were not working, impeding the investigation.”

Last week, it was announced that no charges would be brought forward in the case. But in a letter to Rep. Mark Takano (D-Calif.), chairman of the Veterans Affairs Committee, Wilkie said “the unsubstantiated claims raised by you and your staff could deter our veterans from seeking the care they need and deserve,” calling the VA a “safe place for all veterans.”

There’s a problem with that statement, however. Missal never said the claim was unsubstantiated.

“Neither I nor my staff told you or anyone else at the department that the allegations were unsubstantiated,” Missal said last Wednesday, per Military.com. “Reaching a decision to close the investigation with no criminal charges does not mean that the underlying allegation is unsubstantiated.”

He also said he told VA Deputy Secretary James Byrne, and Chief of Staff Pamela Powers, that the investigation was closed “without charges and that no other characterization could or should be made.”

“I trust that this clarifies this matter and you will ensure that no one is informed that our investigation concluded that the sexual assault allegation at issue was not substantiated,” Missal wrote.

Another problem with Wilkie’s statement that the VA is “safe for all veterans,” is that the department’s own research appears to dispute it.

In an op-ed in The Hill on Tuesday, Kayla Williams, a veteran and former director of the Center for Women Veterans at the VA, points out that research published by the department last April found that 25% of female veterans “reported inappropriate and/or unwanted comments or behavior by male Veterans on VA grounds. Eight percent said that this occurred ‘usually or always’ when they were at the VA.”

The VA’s study also found that veterans are already being deterred from seeking care — women who report harassment are “more likely to report feeling unsafe and delaying/missing care,” the research said.

Sexual assault and harassment at the VA was an issue before Goldstein’s attack — though hers brought renewed attention to the crucially important issue. Rep. Julia Brownley (D-Calif.) called for legislation to require the VA to set anti-sexual harassment and assault policies, and put reporting guidelines into place.

And in November, Republican Sens. Joni Ernst and Shelley Moore Capito wrote to Wilkie asking him to provide information about sexual assault convictions against VA employees in recent years.

Takano called Wilkie’s letter “shocking tone-deaf” and “flippant,” saying it served as evidence that “a hostile culture at VA is tolerated.”But Goldstein has said previously that she’ll continue using the VA despite what she experienced, as she’s received “lifesaving care” from the facility, the Times reports.

“I hope the VA gives the necessary attention to this issue so all veterans have access to the health care they have earned and deserve.”