"This is a leadership issue. We will lead." 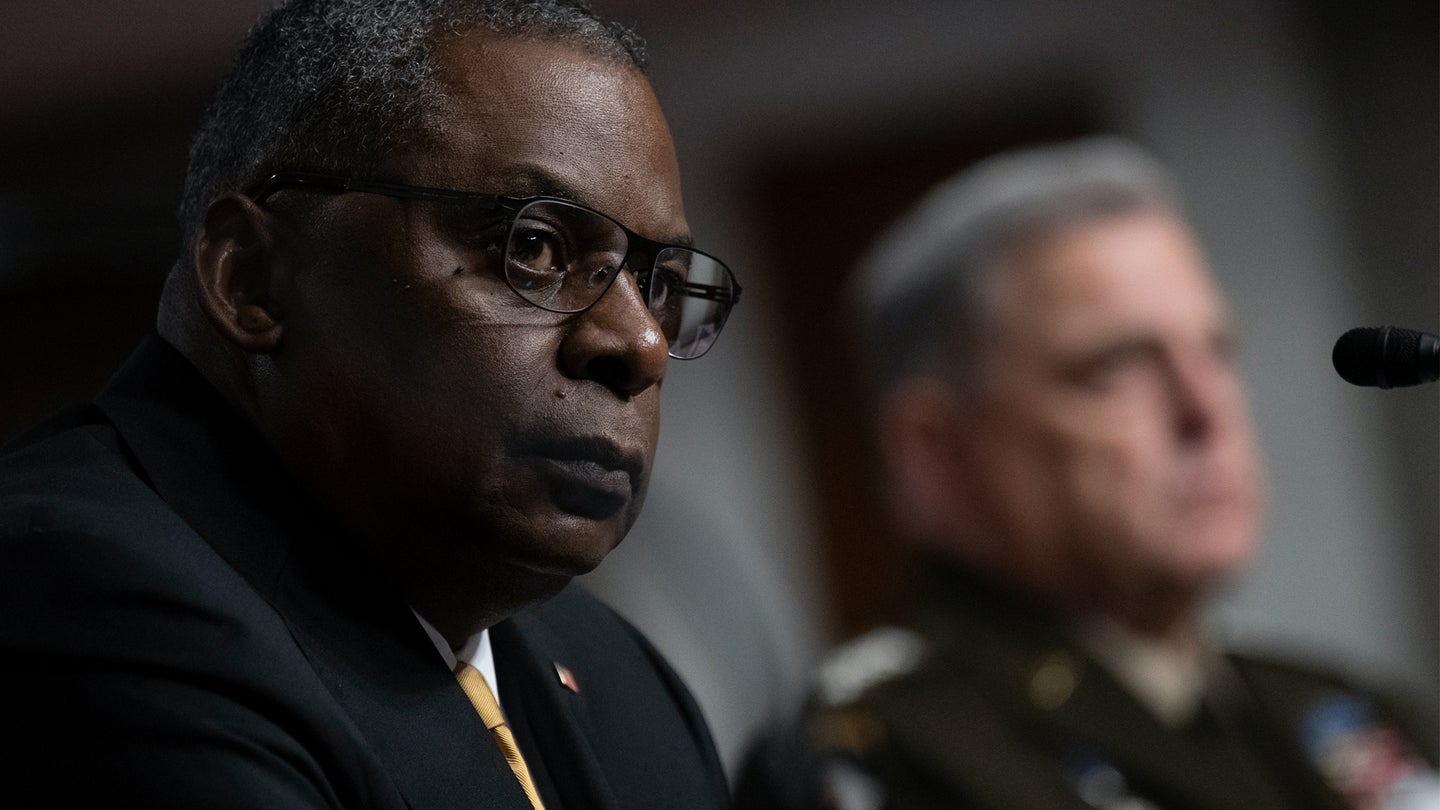 Secretary of Defense Lloyd J. Austin III, Under Secretary of Defense (Comptroller) Michael McCord and Chairman of the Joint Chiefs of Staff, Gen. Mark A. Milley answer questions from the Senate Armed Services Committee during the Department of Defense budget posture in review of the Defense Authorization Request for Fiscal Year 2022, June 10, 2021. (DoD Photo by Chad J. McNeeley).
SHARE

Defense Secretary Lloyd Austin said on Tuesday he supported taking the decision to prosecute sexual assault cases out of commanders’ hands, marking a major shift toward a change that military leaders have long opposed.

Austin said in a statement that the Pentagon would work with Congress “to amend the Uniform Code of Military Justice, removing the prosecution of sexual assaults and related crimes” from the chain of command. The changes were recommended by the Independent Review Commission on Sexual Assault and Sexual Harassment.

Currently, military commanders are ultimately the ones who decide whether or not to pursue legal action against a service member accused of sexual assault. The change to remove that authority is something advocates and some lawmakers have called for over the years. Their criticism centers on military leaders’ failure to protect service members and eradicate assault and harassment, and the arguthat commanders should not be responsible for deciding whether or not to pursue action against alleged offenders.

While military leaders have opposed the move, change has begun to seem inevitable over the last several months as the Pentagon started the independent commission, and lawmakers voiced more and more support for legislation that would change how major crimes in the military are handled.

Gen. Mark Milley, the chairman of the Joint Chiefs of Staff, said in May that he was open to the idea of taking prosecution authority on sexual assault away from the chain of command because the military has “been at it for years, and we haven’t effectively moved the needle.”

But he and the other military chiefs of staff have urged lawmakers to rethink expanding the scope of legislation to other serious crimes in the military justice system, and not just sexual assault.

On Tuesday, hours before Austin’s statement, letters from the Joint Chiefs of Staff sent to Congress in May were released by Sen. Jim Inhofe (R-Okla.), the ranking member of the Senate Armed Services Committee. In their letters, the Joint Chiefs argued that legislation which would overhaul the military justice system could hurt good order and discipline in military units, and ultimately erode trust between commanders and their troops.

While Austin didn’t specify all of the “related crimes” that would be included in the UCMJ changes, he did say that “other special victims’ crimes” including domestic violence would be included.

“I support this as well,” Austin said of including domestic violence. “Given the strong correlation between these sorts of crimes and prevalence of sexual assault.”

In their letters in May, the Joint Chiefs heavily cautioned lawmakers against including other serious crimes in the military justice system overhaul.

Milley said in his letter that removing commanders from prosecution decisions would essentially have a negative effect on everything: “readiness, mission accomplishment, good order and discipline, justice, unit cohesion, trust, and loyalty between commanders and those they lead.”

But, he added that he’s still “open-minded” when it comes to ideas on how to handle sexual assault.

“It is my belief we have not made sufficient progress in recent years to eliminate sexual assault,” he wrote. “And we have consequently lost the trust and confidence of many soldiers, sailors, airmen, Marines, and guardians in the chain of command’s ability to adjudicate these serious crimes.”

Gen. Charles Brown, the Air Force chief of staff, said in his letter that removing “elements of authority” from the chain of command “will likely create some risk,” but said that doesn’t mean “we should not try new measures if we believe they will increase accountability and reduce sexual assaults.”

“Regardless of the approach chosen, we should recognize the complexity of human behavior, measure meaningful results, and be ready to adjust as we inevitably learn,” Brown said.

Gen. James McConville, the Army chief of staff, said much the same: that the  issues the new legislation aims to resolve are already being addressed by the Army, through initiatives like “This is My Squad” and the Army’s People First Task Force, which came to fruition in the wake of the death of Spc. Vanessa Guillén. Gen. David Berger, chief of staff of the Marine Corps, said he was “opposed to creating an environment where commanders believe that any particular class of offenses is ‘the lawyer’s problem.’”

Gen. John Raymond of the Space Force wrote that he was “open to structural changes” like removing sexual assault and harassment cases from the chain of command, but that as written, the new bill “would greatly hamper” commanders’ responsibility to enforce standards in their units.

In response to their letters, Gillibrand argued that “sexual assault crimes can’t and shouldn’t be handled in a vacuum or divorced from other major crimes,” according to Bloomberg reporter Roxana Tiron. She went on to say that part of the reason the line was drawn at “serious felonies” is because there’s “bias in how the military justice system deals with survivors of sexual assault,” and bias “in cases involving Black and Brown service members.”

Gillibrand’s legislation has overwhelming bipartisan support, including from Sens. Ted Cruz (R-Texas), Josh Hawley (R-Mo.), Bernie Sanders (I-Vt.), Tammy Duckworth (D-Ill.), and Elizabeth Warren (D-Mass.). In total, 65 senators have signed onto supporting the bill, meaning it has enough support “to overcome the Senate filibuster rule, which requires at least 60 votes for most bills to advance,” the Wall Street Journal reported.

For months, the writing has been on the wall that change was coming, particularly following the death of Spc. Guillén, who was being sexually harassed by a member of her unit before her death. Her disappearance in April at Fort Hood, Texas, and her family’s statements that she was being sexually harassed opened the floodgates for service members across the military to share their stories of assault and harassment, demanding change and accountability.

“It’s always politics over people,” said a woman who identified herself as a Navy veteran. “The entitled taking advantage of the naive. And leadership failing to do what they preach in every safety brief.”

The issue of assault and harassment was addressed by Austin within hours of being confirmed as the new secretary of defense in January. In a memo released the day after his confirmation, he gave senior military leaders until early February to tell him what has and hasn’t worked in addressing sexual assault and harassment throughout the ranks.

On Tuesday, he reiterated his closing message from that memo: “This is a leadership issue,” he wrote in January. “We will lead.”