The U.S. Marine Corps is reportedly considering a new plan to allow women to attend both boot camp and combat... 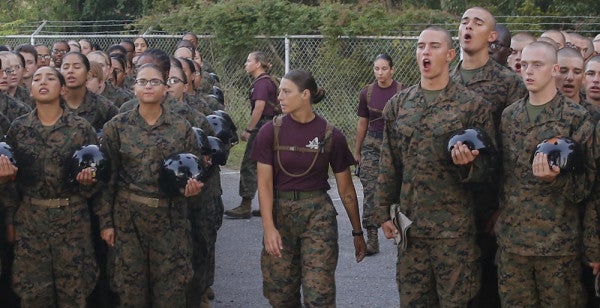 The U.S. Marine Corps is reportedly considering a new plan to allow women to attend both boot camp and combat training alongside their fellow male recruits at Marine Corps Recruit Depot, San Diego, the Associated Press reports, a move that Corps officials claimed was intended to “quash recurring problems with sexism and other bad behavior among Marines.”

The change could come “as soon as next spring,” according to the AP.

All female Marine recruits currently attend boot camp at Parris Island, South Carolina; home of the branch’s only all-female training battalion. The first female infantry Marines graduated from Parris Island and signed enlistment contracts in January. But male recruits can go through both boot camp and combat training at either Parris Island or MCRD San Diego, while women are required to remain on the East Coast in their segregated battalion.

If approved, opening San Diego to female Marines “could be the first step in a broader campaign to give male Marines who do their initial training on the West Coast the opportunity to work with female colleagues early in their career,” according to the AP — a plan that could help begin to stamp out the strains of sexism and misogyny that have roiled the Corps this year.

And even Corps brass have experienced difficulties attempting to stamp out the more banal trappings of a previously all-male culture. In June, Marine Corps Recruit Depot Parris Island commander Brig. Gen. Austin Renforth sparked furor after expressing his desire to keep the earliest stages of training segregated by gender, stating in an interview with Military.com that the adjustment period for female recruits comes with “a lot of tears, a lot of struggling.”

“I think we're trying to find, recruiting-wise, those women who were handed lacrosse sticks and hockey sticks growing up and not Barbie dolls,” Renforth told Military.com at the time. “We don't always get that.”

Corps officials quickly walked back Renforth’s remarks after both active-duty service members and veterans expressed their frustration with Renforth’s comments, not just as a statement of potential policy, but a poor mindset to model to newly enlisted Marines beginning their service alongside female troops.

“The environment at [Parris Island] was one where we create gender stereotypes, we say that no women can be as strong as male Marines,” retired Lt. Col Kate Germano, a former commander of Parris Island's all-female Fourth Recruit Training Battalion who was relieved in 2015, told Military.com in response to Renforth’s remarks. “The commanding general of Parris Island just told male recruits that women can't compete.”

How a potential change will impact operations at both Parris Island and San Diego remains unclear. Public affairs officers at both MCRDs, as well as a spokesman for Neller, did not respond to requests for comment from Task & Purpose. But if the Corps wants to quash issues stemming from sexism and misogyny, the brass had better start sooner rather than later. A May report from the Department of Defense’s Sexual Assault Prevention and Response Office revealed that the Marine Corps had the highest frequency of sexual harassment and abuse among all services — a problem that shows no sign of disappearing anytime soon.