Ending Harassment Of Women In The Corps Starts With Marine Leadership

As a Marine vet, I love the Corps and I tend to focus on the positives aspects of service. While... 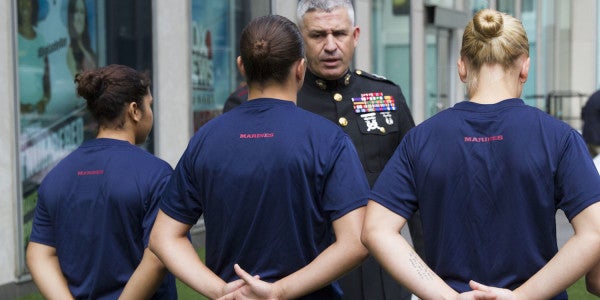 As a Marine vet, I love the Corps and I tend to focus on the positives aspects of service. While I was on active duty from 2002–2008, I never talked about harassment and assault nor spent much time contemplating the severity of the problems. The result is guilt I still carry today. My last active-duty billet was at Marine Corps Recruit Depot Parris Island. At 4th Recruit Training Battalion, I was responsible for the training and welfare of women who had just joined the Corps and were attempting to complete boot camp. I spent countless hours offering squad bay classes to my recruits, often taking triple the planned time to talk about important topics like educational benefits and goal setting. I was committed to connecting with them and mentoring where I saw opportunity. Some I heard from once they graduated boot camp, which was often wholly positive, but, in truth, far too many shared stories of harassment and assault that they’d experienced at their new schools and units. I had never talked about it with them in those squad bays.

I’d been in the Marine Corps for four years already and had countless stories of my own that I could have shared with them, had I spent any time on the issue. One memory of my time in Iraq involved investing in spray paint that I carried with me when I was on the FOB. I needed it to cover increasingly detailed and explicit drawings of me that decorated every porta john on Fallujah. I laughed at the time and gave the “artists” points for creative positioning. I was 25 and confident and refused to recognize the comments as harassment. I could have facilitated an honest and frank discussion with my young recruits who would potentially see that and much worse, and I did not. In that way, I’m complicit.

Marines from the Infantry Training Battalion, School of Infantry-East, navigate their way through the obstacle course at Camp Geiger, N.C., Oct 4, 2013.

I’ve come to realize that silence is both consent and tacit approval. I failed to speak when I should have, and to train and share where sorely needed. When I read the report that hundreds of Marines are being investigated for sharing explicit photos of servicewomen in a closed Facebook group, I knew it was time to speak up.

I believe in the Marine Corps I fought for and think we can combat any enemy, including criminal harassment issues that create an internal battleground for servicewomen. But, in order to put an end, or even start to reduce this type of behavior, Marine Corps leadership needs to put forward a zero-tolerance message, commit to prosecution, and change its gender-segregated practices that devalue women as Marines. Otherwise, this cycle is going to continue.

This is the third reported incident since 2013 of the online targeting of female Marines by male Marines. In 2013, Gen. James Amos faced criticism from Congress for failure to handle extensive harassment issues. In 2014, Task & Purpose published an investigation into Facebook accounts run by Marines that exploited women and perpetuated rape culture. When the reporter reached out to Marine Corps headquarters for comment, “Task & Purpose was unable to ask a single question about the Corps’ response to this issue. An initial inquiry from Task & Purpose was met with an emailed statement from a Marine Corps spokesman, Capt. Eric Flanagan. A request to ask follow-up questions about that statement was denied.”

The Marine Corps’ response is significantly stronger than in 2013 and 2014. “The Marine Corps is deeply concerned,” stated a spokeswoman, adding that individuals who feel they were targeted should seek appropriate assistance via the Naval Criminal Investigative Service or Military One Source. Marine Commandant Gen. Robert Neller called for respect and trust via Twitter.

Every Marine should give their all to be the best human beings & teammates possible. Respect & trust w/fellow Marines = key to our success

Sgt. Maj. Ronald L. Green’s statement offered a call that leaders at all levels should heed as the Corps weighs how to demonstrate leadership at every level. It is a call on which each of us as individuals should reflect. “Ultimately, we must take a look in the mirror and decide whether we are part of the problem or the solution,” he said in a statement. I wasn’t a strong part of the solution when I should have been as a young Marine officer, but I know now I can’t continue to turn a blind eye.

Corps leadership is finally speaking out, although what seems to be missing is a clear message that this type of behavior will not be tolerated and that there will be real repercussions for those found guilty of harassing women in any capacity. I can’t imagine why the Corps feels like it needs to tiptoe around this language, but the unwillingness to come out and say this is sadly unsurprising. The acts described on Marines United constitute harassment.

None if this is harmless fun, as the comments sections of many of the articles out today imply. It’s dangerous. The Marine Corps struggles with the highest rate of sexual assault of all service branches. One-third of women who reported being sexually assaulted in the past year were previously sexually harassed by their attackers.

Security challenges facing America in the 21st century are many. They include enemies united by ideology rather than statehood — male and female extremists alike.Female Marines will continue to be operationally needed, especially in the Middle East, during the coming years.

Sgt. Christina E. Lahr, a field wireman with Headquarters Battery, 10th Marine Regiment teaches a class on how to properly interact with social media during a corporal’s course aboard Camp Lejeune, N.C., Dec. 10, 2014.

Organizationally, Marine Corps leadership has a role to take not just in stopping harassment, but in recognizing the ways that segregated training and integration opposition contribute to the growth and cultural acceptance of women-bashing. Integration in the Marine Corps is currently happening from a place of imbalance as segregated training contributes to the marginalization of female Marines. It is also contributing to a culture of assault, harassment, and misogyny that damages women serving within it.

While Marine Corps leadership has spoken up against sexist Facebook movements perpetuated by its own, the next step is to take strong action to demonstrate the Corps values its female Marines and will defend them. Anything else will just be an empty gesture.