Mattis To ‘Marines United’ Group: ‘We Will Not Excuse Or Tolerate Such Behavior’

On Friday, Secretary of Defense James Mattis released a statement on the nude photo scandal that’s rocking the Marine Corps,... 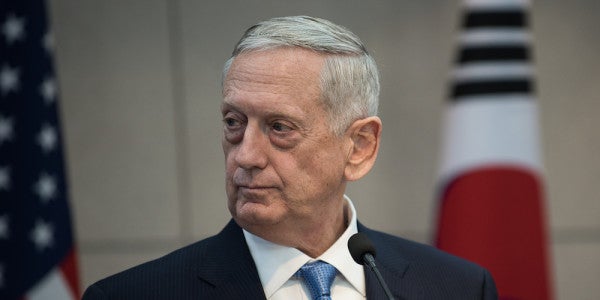 On Friday, Secretary of Defense James Mattis released a statement on the nude photo scandal that’s rocking the Marine Corps, and he is not pleased.

“The purported actions of civilian and military personnel on social media websites, including some associated with the Marines United group and possibly others, represent egregious violations of the fundamental values we uphold at the Department of Defense,” he said in a statement to Military Times. “The chain of command is taking all appropriate action to investigate potential misconduct and to maintain good order and discipline throughout our armed forces.”

Mattis’ mention of “good order and discipline” is a clear reference to Article 134 of the Uniform Code of Military Justice, which prohibits “all disorders and neglects to the prejudice of good order and discipline in the armed forces, all conduct of a nature to bring discredit upon the armed forces, and crimes and offenses not capital.” It’s a catch-all for offenses not explicitly detailed elsewhere in the UCMJ.

Article 134 will likely be deployed by the military to deal not just with the production and distribution of the explicit content that defined “Marines United,” but the resulting threats by service members levied against journalists like Warhorse editor Thomas Brennan, who first broke the story, and James LaPorta, a freelance journalist who discovered uncovered the reconstituted Marines United group for CNN.

A source confirmed that the Naval Criminal Investigative Service is actively investigating the threats against LaPorta, one of which was reportedly perpetrated by Cpl. Chris Stifler — a Marine and calibration technician, according to the Department of Defense database Marine Online. Stifler was the administrator of the Marines United 2.0 group, who as Task & Purpose reported Thursday, taunted both military investigators and the media. Stifler has since left the new Facebook group. NCIS did not immediately respond to request for comment.

Related: Ending Harassment Of Women In The Corps Starts With Marine Leadership

In a 30-minute Pentagon press conference Friday afternoon, Marine Commandant Gen. Robert Neller announced the creation of a task force led by the assistant commandant, in addition to the ongoing NCIS investigation, to develop lessons learned and future training to address “the subculture that may have given rise to this.”

“We claim that being a Marine is a special title and something that you earn,” Neller said, echoing Mattis. “There’s honor here. But there is no honor in denigrating a Marine in any way, shape, or form … If you’re participating in this type of behavior in any way, shape or form, you’re not helping me. Or your Marine Corps.”