After a piercing March investigation pointed to the 30,000-member strong “Marines United” Facebook group as ground zero for the Corps’... 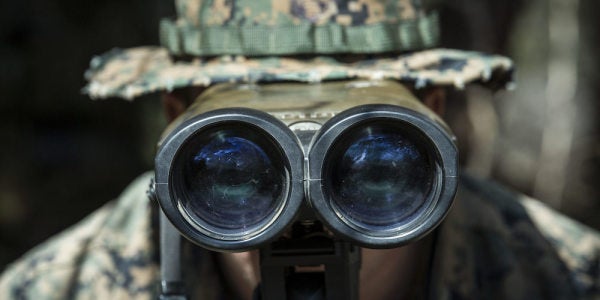 After a piercing March investigation pointed to the 30,000-member strong “Marines United” Facebook group as ground zero for the Corps’ nude-photo scandal, successor groups immediately sprung up across social media and file-sharing networks to keep explicit photos of unconsenting female service members, veterans, and civilians flowing across the internet. And despite the looming threats of courts-martial and criminal prosecutions, military-connected strains of misogyny and sexism are alive and well — and have turned more vile and vicious online.

On July 12, the Daily Beast reported the existence of a new “Mike Uniform” Facebook group and DropBox drive containing increasingly violent imagery, including a photograph that appears to show an unconscious woman photographed naked “by a man whose reflection is visible in a mirror, though his face is unclear.” (Task & Purpose was able to independently confirm the existence of the photograph, as well as the DropBox and Facebook group where it was posted). The group’s tagline is a clear tribute to Marines United: “I am MU this is MU. it may have to be under a different name and some of the things we used to do we don’t do anymore be we can still come together as brother on a page that is just for us.”

Publication of the new imagery appears to be at least partly driven by revenge. Task & Purpose confirmed that one new private Facebook group explicitly focuses on Kally Wayne, a former Marine who told ABC News in the aftermath of the initial Marines United scandal last March that an ex-boyfriend had shared explicit images and video of her around the internet. Wayne was among several victims whose likeness was plastered not just across Facebook and DropBox, but other pornographic sites as retribution for her speaking out. Several active-duty and veteran Marines interviewed by Task & Purpose at the time had characterized her account as “false accusations” by a promiscuous, disgraced Marine.

Related: The Rise And Fall (And Rise) Of ‘Marines United’»

The administrators of pages like Mike Uniform and others, such as “Group JTTOTS No Wooks Dependas No Reporting Bubba,” self-identified as active-duty or veterans on their Facebook profiles, clearly aren’t wary of the ongoing Naval Criminal Investigative Service inquiry that’s ensnared dozens of their fellow Marines.

Indeed, the escalation among offenders with Marine ties comes amid growing pressure from military authorities. In recent months, NCIS reviewed more than 130,000 explicit images across 168 websites, identifying 67 Marines (and 22 civilians) as persons of interest in the Marines United investigation. The Corps announced on July 10 that the first Marine had pleaded guilty to sharing nude photos without consent on the now-defunct Facebook group page. The unidentified Marine, who faces imminent administrative discharge, was sentenced to 10 days confinement, forfeiture part of one month’s pay, and reduction in rank by three grades.

“NCIS has tools as its disposal to track both perpetrators and victims, but without the Google Drive they can’t do much about it,” the staffer told Task & Purpose. “You need evidence not just of the images and videos, but the comments that show Marines explicitly targeting and IDing victims.”

“Summary court is little more than traffic court,” Christensen told Task & Purpose. “It has a maximum punishment of 30 days in jail for an E4 or below, and if you’re an E5 there’s no possibility of imprisonment — officers don’t go to one.”

More importantly, he says, “There’s no public record: Once you’re out of the Corps, nobody knows what you did.”

For lawmakers like Speier who have deployed legislative tools to address sexism and misogyny in the armed forces — both the House and Senate versions of the 2018 National Defense Authorization Act amend the Uniform Code of Military Justice to explicitly define the sharing of sexually explicit images without consent as unlawful — such a relatively lax punishment appears more of a setback than a step forward.

“This does not strike the congresswoman as a proportional punishment,” the legislative staffer for Speier told Task & Purpose. “The fact that a second Google Drive has emerged shows there aren’t sufficient disincentives in place thus far.”

“There are female Marines that are far better at everything than I am,” he added. “Individual performance is what matters to our mission, not gender.”