Hundreds of Marines could face charges of misconduct for their participation in soliciting and sharing naked photos of female service members... 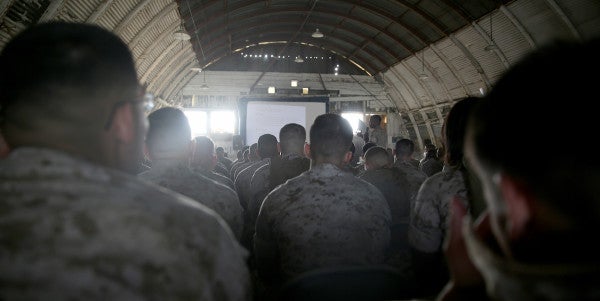 Hundreds of Marines could face charges of misconduct for their participation in soliciting and sharing naked photos of female service members and veterans on social media. According to an investigation by Reveal News and The War Horse published March 4, the Naval Criminal Investigative Service is investigating scores of enlisted Marines for compiling thousands of naked photos of servicewomen, often surreptitiously, and distributing them through Facebook and Google Drive.

The private Facebook group “Marines United” boasts 30,000 followers and countless profane comments, including threats of rape. Already, more than two dozen female Marines have been identified down to their duty station and rank, a gross violation of their privacy. From Reveal:

More than 2,500 comments about the photos were left by group members, many of whom used their personal Facebook accounts that include their names, ranks and duty stations. Some invited others to collect, identify and share photos of naked or scantily clad servicewomen. Based on their profiles, service members who participated in the photo sharing are stationed across the world — from Japan to North Carolina — and across military branches, from air wing to infantry.

Dozens of now-deleted Google Drive folders linked to from the Facebook page included dossiers of women containing their names, military branches, nude photographs, screenshots of their social media accounts, and images of sexual acts. Dozens of other subfolders included unidentifiable women in various stages of undress. Many images appear to have originated from the consensual, but private, exchange of racy images, some clearly taken by the women themselves.

The complaints to the Pentagon began on Jan. 30, less than a month after the first female enlistees reported for duty with a Marine infantry unit. The existence of the page's activities, confirmed by the Department of Defense, was first uncovered by The War Horse editor-in-chief Tom Brennan, a Marine veteran himself.

“The Marine Corps is deeply concerned about allegations regarding the derogatory online comments and sharing of salacious photographs in a closed website,” the Corps wrote in a draft response. “This behavior destroys morale, erodes trust, and degrade the individual. The Marine Corps does not condone this sort of behavior which undermines our core values. The Marine Corps takes every allegation of misconduct seriously. Allegations of misconduct are thoroughly investigated and handled at the appropriate judicial or administrative forum.”

In a statement sent to Task & Purpose, Commandant of the Marine Corps Gen. Robert Neller said, “For anyone to target one of our Marines, online or otherwise, in an inappropriate manner, is distasteful and shows an absence of respect. … I expect every Marine to demonstrate the highest integrity and loyalty to fellow Marines at all times, on duty, off-duty, and online.”

While the Pentagon investigation may be weeks old, problems like this have plagued the Corps for years. In 2013, Rep. Jackie Speier, a Democrat from California, decried the misogynistic behavior exhibited in multiple private Facebook groups in a letter to then-Defense Sec. Chuck Hagel as “contribut to a culture that permits and seems to encourage sexual assault and abuse.” Just a year later, Task & Purpose reported that a growing network of Facebook pages, often run anonymously, were becoming increasingly part of junior enlisted infantry culture, overflowing with terrifyingly casual comments ranging from rape and racism to homophobia and outright sexism.

The Corps is aware of the problem: A public affairs guidance memo obtained by Reveal News advised public affairs officers to maintain an “active” posture while offering resources to those affected by this problem. It also cautioned against a coming backlash from enlisted soldiers and vets: “The story will likely spark shares and discussions across social media, offering venues for Marines and former Marines who may victim blame, i.e., ‘they shouldn’t have taken the photos in the first place,’ or bemoan that they believe the Corps is becoming soft or politically correct.”

In an email to Task & Purpose regarding actions the Corps plans to take against individuals who participate in sexual harassment and cyber bullying, Marine Corps spokesman Capt. Ryan E. Alvis said, Marines “could potentially be charged for violating Article 133 (for officers) or Article 134 of the Uniform Code of Military Justice (UCMJ). If a Marine shared a photo of another person that was taken without that person’s consent and under circumstances in which that other person had a reasonable expectation of privacy, the Marine may have violated Article 120c, UCMJ, for broadcasting or distribution of an indecent visual recording. A Marine who directly participates in, encourages, or condones such actions could also be subjected to criminal proceedings or adverse administrative actions.”

Jared Keller is a senior editor at Task & Purpose and contributing editor at Pacific Standard.