Almost two months after the “Marines United” nude photo-sharing scandal broke, the Navy is taking new steps to crack down... 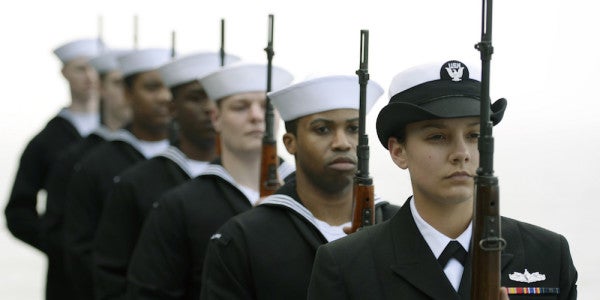 An interim revision to Navy regulations released by acting Secretary of the Navy Sean J. Stackley on Monday declares that the non-consensual distribution of explicit images by Navy and Marine Corps personnel constitutes wrongdoing “if the person making the distribution or broadcast does so without legal justification or excuse, knows or reasonably should know that the depicted person did not consent to the disclosure, and the intimate image is distributed or broadcast.”

The changes effectively criminalize sharing nude photos of fellow service members without their consent, the core activity of the Marines United Facebook page that sparked outrage at the military’s apparent culture of sexual abuse and exploitation.

But the sudden update to Navy regs may not stand up to legal scrutiny, according to Navy Times:

The changes were made public Tuesday in an all-Navy message, a move that some experts think will be hard-pressed to defend in court. Changing Navy regulations is a bit of an end-around for making changes to the Uniform Code of Military Justice, which would require an act of Congress.

In this case, detailing expectations of Department of the Navy personnel amounts to a lawful order, which can be enforced with the full weight of the justice system, from non-judicial punishment to general court martial.

As Task & Purpose previously reported, Article 120(c) of the UCMJ expressly prohibits “indecent viewing, visual recording or broadcasting … another person’s private area without the person’s consent” — a transgression punishable by punitive discharge, confinement, and forfeitures that could result in the loss of veteran benefits.

Earlier this month, Naval Criminal Investigative Service director Andrew Traver announced that military investigators had identified at least 27 individuals — including 15 active-duty Marines — believed to have engaged in “criminal activity” as part of the non-consensual distribution of explicit photos on the Marines United Facebook group.

The new social media guidance published by the Marine Corps on March 14 also connected illicit internet activity with Article 92, or failure to obey a lawful general order: “Marines must never engage in commentary or publish content on social networking platforms or through other forms of communication that harm good order and discipline or that bring discredit upon themselves, their unit, or the Marine Corps.”

In early April, two active-duty Marines from the 2nd Battalion, 4th Marines out of Camp Pendleton in California were punished for making “demeaning comments about one of their enlisted leaders” as part of a wider crackdown on online misconduct in the aftermath of the Marines United scandal.

The new regulations released by acting Stackley are temporary until the edition of fleet regulations hits the printers, according to Navy Times.