The Navy officer who apologized to Iran after the crew of the riverine boats he was in command of were... 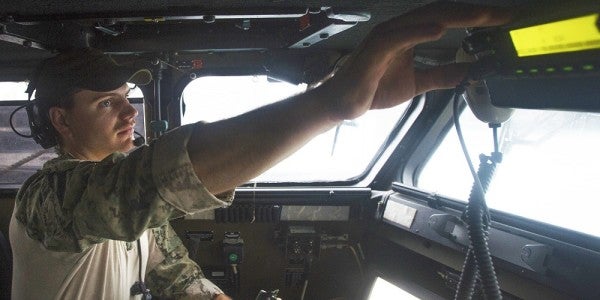 The Navy officer who apologized to Iran after the crew of the riverine boats he was in command of were captured in January 2016, will be allowed to remain in the service after a separation board in Imperial Beach, California, ruled in his favor on April 18, according to Navy Times.

“What tried to do is use a teeny window of this regulation and drive a truck through it,” Phillip Lowry, Nartker’s Utah-based lawyer, told the newspaper. “And the board saw through it.”

#Iran state TV showed a footage in which the commander of #US sailors made an apology.#navy#Pentagon pic.twitter.com/VCdjEZiY54

The Navy was looking to give Lt. David Nartker the boot for two reasons. First, the service alleged that he disobeyed a general order — specifically, the standing order that boat crews were to go from Weapons Condition 4 to Weapons Condition 3 (weapons loaded, with an empty chamber) once they left their home base on a patrol:

Related: In Second Season, Serial Takes On Bergdahl — And The Messy World Of Military Culture »

Nartker was found guilty of that charge during an admiral’s mast last August, notes the Navy Times.

The second reason — well, it was more about appearances. Bad ones.

The Navy attempted to hit Nartker with a charge for “substandard performance based on his physical appearance and deportment,” a separation-level offense usually doled out to physically unsatisfactory sailors and those who have consistent trouble meeting grooming standards. Nartker wasn’t out of shape or unkempt, but his appearance in an Iranian propaganda video was a national embarrassment.

Natker was among the 10 sailors who surrendered to the Iranian military after one of the two boats broke down in Iran’s territorial waters near Farsi Island. They had strayed into Iran’s territory accidentally, which Natker admitted to and apologized for in a filmed propaganda video. The crew was held for 16 hours and then released unharmed, but the footage of the apology and images of the sailors kneeling in surrender became a high-profile scandal for the Navy and fueled an international crisis.

The statement made by Nartker was a condition for the boat crew’s release, but it violated the code of conduct all service members must adhere to when in enemy hands, according to a military investigation.