US Troops Will Not Stay In Iraq After ISIS Is Defeated, Prime Minister Insists

The U.S. military will not maintain combat troops in Iraq following the annihilation of ISIS, Iraq’s Prime Minister insisted on... 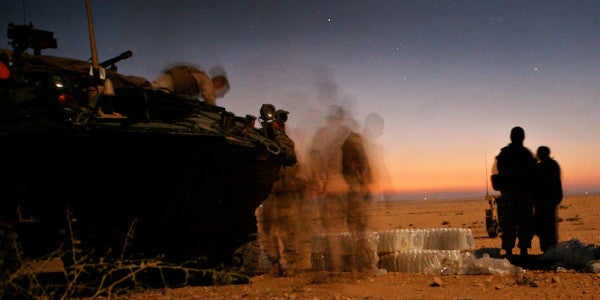 The U.S. military will not maintain combat troops in Iraq following the annihilation of ISIS, Iraq’s Prime Minister insisted on Friday in a statement — rebutting a Thursday report from the Associated Press that the two governments were hammering out a deal on a “long-term” U.S. presence in the country.

Two officials, one from the U.S. government and one from the Iraqi regime, had previously indicated to the AP that there was “a general understanding on both sides that it would be in the long-term interests of each to have that continued presence.”

But the office of Iraqi Prime Minister Haider al-Abadi slapped down that assertion, saying in a “clarification” released on Twitter Friday that while “civilians and advisers” from a number of countries will certainly aid Iraqi government efforts to stabilize the war-torn country, the government “has not expressed any jurisdiction regarding the [U.S.] military role for the stage beyond the decisive victory over terrorism.”

There are currently more than 6,000 American combat troops deployed in Iraq, but that number has been steadily increasing over the last few months — though it’s unclear by how much.

In March, the Trump administration announced that it would cease disclosing information about the scope and size of future U.S. troop deployments in both Iraq and Syria, just days after Pentagon announced it was sending an “unspecified” number of troops from the U.S. Army’s 82nd Airborne Division to support Iraqi security forces.

Abadi’s chilly rejoinder follows the Pentagon’s new push to deploy between 3,000 and 5,000 more combat troops to Afghanistan to break the “stalemate” between the multinational coalition and the Taliban. A mix of special operators and conventional force will serve as an ongoing deterrent to resurgent jihadi groups emboldened by the rise of ISIS.

“We want to maintain that partnership with Afghanistan and we want to ensure that Afghanistan reaches its potential, so that’s the objective of the strategy,” Acting Assistant Secretary of Defense for Special Operations Theresa Whelan told the Senate Armed Services Committee Thursday.

Despite al-Abadi’s rebuke, the momentum in Afghanistan suggests that a sizeable U.S. force will put hit the ground in Iraq sooner rather than later. That’s partially due to mission creep: As Business Insider’s Paul Szoldra points out, both U.S. troop and contractor levels have been steadily rising over the last few years.

But this was always the plan, wasn’t it? Following February talks with Iraqi leaders in Baghdad, Defense Secretary James Mattis emphatically reaffirmed the ongoing strategic partnership between the countries, saying that he “imagine we’ll be in this fight for a while and we’ll stand by each other.” Not too long, we hope.