The Trump administration and the Iraqi government are in negotiations to keep U.S. troops in Iraq following the conclusion of... 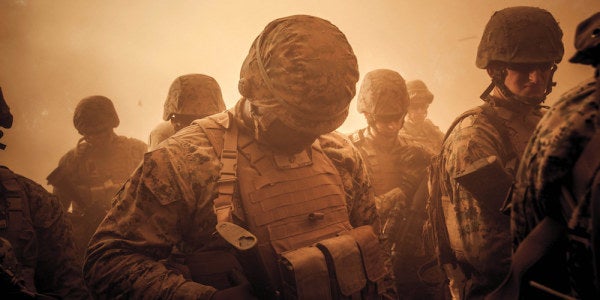 The Trump administration and the Iraqi government are in negotiations to keep U.S. troops in Iraq following the conclusion of the multinational campaign against ISIS, officials from both governments told the Associated Press on Thursday.

White House officials are engaged in preliminary talks with Iraqi Prime Minister Haider al-Abadi regarding troop levels in the country — discussions that, according to the AP, “point to a consensus by both governments that… a longer-term presence of American troops in Iraq is needed to ensure that an insurgency does not bubble up again once the militants are driven out.”

The logic reflects concerns that a premature withdrawal from Iraq at the end of 2011, initiated by President George W. Bush under the 2008 Status of Forces Agreement between the U.S. and Iraqi governments, created a political vacuum that drove members of the country’s minority Sunni population into the arms of terror networks like the al-Qaeda-affiliated Islamic State of Iraq, ISIS’s predecessor.

According to a U.S. official, Secretary of Defense James Mattis has personally engaged Iraqi officials over “what the long-term U.S. presence would look like.” The news comes less than two weeks after Mattis made an unannounced visit to Kabul to assess the Pentagon’s role in bringing the U.S. involvement in Afghanistan to a permanent close.

“There is a general understanding on both sides that it would be in the long-term interests of each to have that continued presence,” the U.S. official told the AP, describing some of the terms currently under discussion with Iraqi officials:

U.S. forces in Iraq would be stationed inside existing Iraqi bases in at least five locations in the Mosul area and along Iraq's border with Syria, the Iraqi government official said. They would continue to be designated as advisers to dodge the need for parliamentary approval for their presence, he said.

He said al-Abadi is looking to install a “modest” Iraqi military presence in Mosul after the fight against the Islamic State group is concluded along with a small number of U.S. forces. The forces would help control security in the city and oversee the transition to a political administration of Mosul, he said.

The U.S. official emphasized that there were no discussions of creating independent American bases in Iraq, as such a move would require thousands more personnel. He said the troop levels would be “several thousand … similar to what we have now, maybe a little more.”

There are currently more than 6,000 combat troops deployed in Iraq, but that number has been steadily increasing over the last few months.

At the end of March, the Pentagon announced it was sending an “unspecified” number of troops from the U.S. Army’s 82nd Airborne Division to bolster Iraqi security forces in their months-long siege of the strategically important city of Mosul.

A few days after the 82nd’s deployment, the Trump administration announced that it would cease disclosing information about the scope and nature of future U.S. troop deployments in both Iraq and Syria, citing operational security and “tactical surprise.”

Based on Mattis’ past statements, a prolonged troop presence in Iraq following the decimation of ISIS seems unsurprising. On February 20, Mattis emphatically reaffirmed the political and military partnership between the U.S. and Iraq, following talks with Iraqi leaders in Baghdad.

“The Iraqi army is in the fight with the coalition supporting them, with full support, and we’re going to continue to stand by the Iraqi army and the Iraqi people who are fighting this enemy,” Mattis said. “I imagine we’ll be in this fight for a while and we’ll stand by each other.”