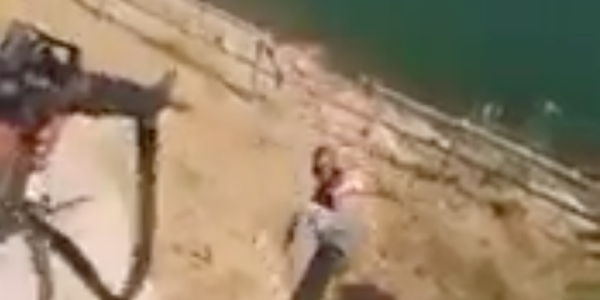 Graphic videos circulating on social media that purportedly show Iraqi soldiers beating and killing men suspected of being ISIS militants in the recently liberated city of Mosul have drawn condemnation from Human Rights Watch, the Associated Press reported on July 13.

Two videos were posted to Facebook on July 11, the day after Iraqi Prime Minister Haider al-Abadi declared “total victory” in Mosul, which had been under ISIS control since the terrorist group began its rampage through Iraq in 2014.

In one video, Iraqi soldiers in desert uniform shout as they beat a group of men covered in fresh blood. “Is this one with Daesh or not?” a soldier is heard asking, using the Arabic acronym for ISIS. One of the men is then dragged to the edge of a high wall overlooking the Tigris River. Gunshots pop in the background. The body of a man who had apparently already been thrown to his death comes into the frame as the camera peers over the edge and the Iraqi soldiers begin shooting it.

The soldiers then lift the man they had dragged to the wall’s edge and throw him off. His body is shot up as soon as it hits the ground. The gruesome footage evokes similar scenes chronicled by ISIS, which has long been fond of creative forms of violence, including throwing suspected homosexuals to their deaths from high buildings.

In the other video, titled “Our heroes in the Iraqi Army 16th division executing the remnants of Daesh terrorists in Old Mosul,” which was viewed by the Associated Press but not Task & Purpose, a man wearing Iraqi army fatigues reportedly guns down an unarmed man kneeling in front of a car. An accompanying caption says the video is dedicated to the “families of the martyrs (of the Mosul operation).”

The videos were posted on the Twitter page for Mosul Eye, a blog that has closely chronicled the Islamic State’s occupation of Mosul and the subsequent battle to liberate it from within the city. The Associated Press could not confirm the authenticity of the videos. An Iraqi interior ministry spokesman told BBC that if they are indeed authentic, those responsible for the killings “must be brought to justice.”

The campaign to retake Mosul from ISIS lasted more than eight months and involved a coalition of Iraqi and Kurdish troops bolstered by U.S. airstrikes. Sporadic fighting continues as a small but unknown number of ISIS militants remain entrenched in Mosul’s Old City. Meanwhile, multiple reports of torture and extrajudicial killing of ISIS suspects have started circulating, raising serious concerns that the city will soon be beset by a wave of revenge-fueled violence.

“These reports have been met with congratulations from Baghdad on the victory, only further fostering the feeling of impunity among armed forces in Mosul,” Belkis Wille, senior Iraq researcher at Human Rights Watch, told BBC.

Some outside observers saw this coming.

“Horrific though the crimes of [ISIS] are, there is no place for vengeance,” a statement released by the United Nations High Commissioner for Human Rights following the announcement of victory in Mosul. The statement also implored Iraq to address the “human rights challenges” certain to arise as Mosul emerges from three years of ISIS rule. If those challenges aren’t address, the statement warns, they will “further violence and civilian suffering.”

That advice seems to being going unheeded — or at least for now. On July 13, Human Rights Watch reported that dozens of women and children suspected of having familial links to ISIS were forcibly moved into a tent camp near Mosul that Iraqi authorities are calling a “rehabilitation camp.”

“Iraqi authorities shouldn’t punish entire families because of their relatives’ actions,” Lama Fakih, the Mideast deputy chief at HRW told the Associated Press. “These abusive acts are war crimes and are sabotaging efforts to promote reconciliation in areas retaken from ISIS.”