An initial investigation of a recent airstrike believed to have killed more than 200 civilians in Mosul found it was... 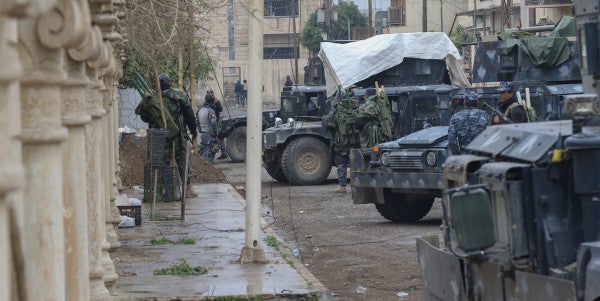 An initial investigation of a recent airstrike believed to have killed more than 200 civilians in Mosul found it was conducted by the U.S.-led coalition at the request of Iraqi security forces, the Pentagon said Saturday.

Witnesses said the airstrike killed hundreds of residents on Baghdad Street in west Mosul’s Aghawat Jadidah neighborhood March 17, including many women and young children. On Friday, in an area where apartment blocks were reduced to rubble, at least 50 bodies could be seen, including those of pregnant women, children and newborns.

On Saturday, a day after announcing that the incident was under investigation, Pentagon officials released a statement saying the coalition had targeted Islamic State fighters and equipment in the area March 17, “at the location corresponding to allegations of civilian casualties.”

The coalition said that it takes allegations of civilian casualties seriously and that a formal Civilian Casualty Credibility Assessment of the airstrike and the civilian toll is underway.

“The coalition respects human life, which is why we are assisting our Iraqi partner forces in their effort to liberate their lands from ISIS brutality,” the statement said, using an acronym for Islamic State.

The airstrike, if found to be responsible for the fatalities, would mark the deadliest civilian casualty incident by far since the U.S. military began its involvement in mid-2014. The credibility assessment, in which the military gathers and analyzes an array of information that is classified and public, is expected to take two to three weeks.

The focus of the inquiry will be whether the coalition airstrike hit civilian buildings; whether an accumulation of airstrikes in the area degraded the structural integrity of buildings before they fell; or whether Islamic State detonated an explosion after the airstrike to bring structures down, according to Col. John Thomas, Central Command spokesman.

“This sort of assessment is really complex,” Thomas said. “It gets especially difficult to determine what happened in certain areas of the city where the streets are so narrow that large vehicles cannot get through.”

Another likely possibility is that an airstrike hit or triggered an Islamic State suicide car bomb. Militants have deployed the mobile bombs, in which a driver will blow himself up in the face of advancing Iraqi forces. Witnesses said militants parked a truck packed with explosives on their block days before the airstrike, then forced families inside their homes as they lingered outside, sniping from roofs.

Some saw militants shooting at aircraft before the strike, then saw the truck explode during the attack. United Nations officials said they were “profoundly concerned” by the allegations surrounding the airstrike.

“We’re incredibly worried about what is happening in western Mosul. It’s much, much, much worse than the east for civilians,” Lise Grande, the U.N.’s humanitarian coordinator for Iraq, said Saturday.

The military is investigating at least a dozen other reports of civilian casualties in Mosul.

The Pentagon has acknowledged 220 civilian deaths from coalition airstrikes in Iraq and Syria since the U.S. campaign against Islamic State began in 2014. Independent monitoring groups such as the London-based nonprofit Airwars put the casualty figures much higher, at about 2,700 civilians killed in airstrikes in both countries during that time.

“Our goal has always been for zero civilian casualties,” the Pentagon said Saturday. “But the coalition will not abandon our commitment to our Iraqi partners because of ISIS’ inhuman tactics terrorizing civilians, using human shields, and fighting from protected sites such as schools, hospitals, religious sites and civilian neighborhoods.”

There were reports Saturday that Iraqi forces had halted operations across Mosul in response to the airstrike, but officials said that wasn’t true.

“We didn’t stop our operation. Our operation is still ongoing, but it’s not like before,” said Raed Shaker Jawdat, Iraq’s federal police chief.

“We are now going slowly,” he said, because the Old City area where they have been fighting is densely populated. Iraqi leaders called for investigations into the strike, and greater restraint by forces fighting to free Mosul.

“We realize the huge responsibility the liberating forces shoulder,” Iraqi parliament speaker Salim Jabouri tweeted, calling on them to “spare no effort to save the civilians.”

Iraqi Vice President Osama Nujaifi, a Mosul native, issued a statement calling the strike a “humanitarian catastrophe” that killed hundreds. He blamed the U.S.-led coalition and federal police for using excessive force and called for an emergency session of parliament to address the incident.

Atheel Nujaifi, the former Mosul governor, called for a U.N. investigation into the airstrike. Otherwise, he said, Iraqi forces are unlikely to adjust their tactics.

“They need to change the military operation, to deal with it as a city, not an open area. There’s citizens inside it, so they need to use minimal fire, not huge bombs,” he said. “I don’t think it will change anything if there’s no international pressure.”

West Mosul residents had complained about civilian casualties from airstrikes in the days leading up to the Jadidah strike. Hours after fleeing west Mosul with his family March 10, Mohammed Ali Mohammed, 40, recalled how he saw two neighbors killed in airstrikes.

“Islamic State was trying to take those two guys from their house,” he said of three militants. “The plane targeted them and killed them all” — including the two civilians. His daughter’s mother-in-law, sitting nearby in a field as they awaited a bus to a displaced persons camp, said her daughter’s west Mosul home was also targeted in an airstrike.

“Islamic State forced us to leave our houses. They said you have half an hour or we will kill you,” Taha recalled.

“There were many Islamic State fighters in our neighborhood,” she said, but the family stayed because before the offensive, “we got leaflets from the army telling us to stay.”

Afterward, militants forced families into their Wadi Hajar neighborhood, and Taha took 20 people in for a week, in addition to her family of 10. Now she worries about airstrikes in other overcrowded neighborhoods still under militant control. “They’re using our roofs to target them and so civilians are getting killed,” she said.

Seated nearby, electrician Dari Saoud, 19, said he had seen a house in his Mohata neighborhood targeted by an airstrike the day before that killed at least 30 civilians, including women and children.

“I saw it with my own eyes” from about 50 yards away, he said, recalling how a bomber destroyed the civilian home and nearby houses where he said militants were sheltering.

“They are accurate about their goals, their targets, but Daesh has time to escape,” he said, using the Arabic acronym for Islamic State. He said he doesn’t blame the U.S.-led coalition for the civilian toll.

“It’s because of Daesh that civilian casualties are happening,” Saoud said.

Abu Adnan, 60, fled his west Mosul neighborhood near the Old City on March 10, a week after he saw a neighbor killed and another injured in what he described as an airstrike.

“They should be accurate with the targeting of Islamic State fighters because the Old City is densely populated and the houses are not good quality. If one falls, others will too,” Abu Adnan said as he hauled a bag of possessions over a dirt berm and out of his Danadan neighborhood as federal police looked on. His daughter, Amina, 10, carried a white flag to signal that they were civilians. Most of their relatives live in the Old City, Abu Adnan said.

Nearby, Namir Adib, 53, who runs a local supermarket, said he saw the airstrike that killed their neighbor, 28-year-old university student Bakr Borham.

“Islamic State fighters were on the roof” of Borham’s house, Adib said, but not with his permission — he was a civilian. He pointed to windows and doors that he said were damaged by the airstrike.

“Many people get killed because of the airstrikes,” said his brother and neighbor, Atheer Ghazi, 55, adding that he would prefer to see soldiers fighting in the streets.

Up the street, barber Muthana Jabar, 32, said that he was friends with Borham and that he was nearby when the airstrike hit his house.

An Islamic State sniper was on the roof, so it was targeted, he said of Borham’s home. “Two days later we went to check the house, and he was dead. They should be more careful with the airstrikes because it endangers our lives,” Jabar said.

(Hennessy-Fiske of the Los Angeles Times reported from Mosul and Hennigan of the Tribune Washington Bureau from Washington.)