The Siege Of Mosul Is Over — And ISIS Lost

Almost 8 months after it began, the U.S. military and Iraqi Security Forces have officially declared victory over ISIS in... 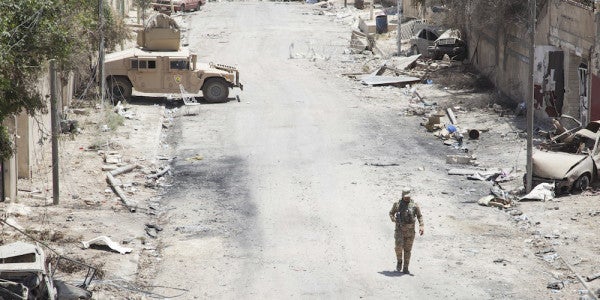 Almost 8 months after it began, the U.S. military and Iraqi Security Forces have officially declared victory over ISIS in the siege of the jihadists’ stronghold of Mosul, a spokesman for Operation Inherent Resolve announced on July 10.

The announcement by OIR came less than two weeks after ISF troops seized the 850-year-old Grand al-Nuri Mosque, where ISIS proclaimed its so-called “caliphate” almost exactly three years ago. The taking of the symbolic building prompted ISF spokesman Brig. Gen. Yahya Rasool to say of ISIS that “their fictitious state has fallen.”

Earlier on July 10, Iraqi Prime Minister Haider al-Abadi had declared “the end and the failure and the collapse of the terrorist state of falsehood and terrorism which the terrorist Daesh announced from Mosul,” Reuters reported.

The official liberation of Mosul comes amid increasing momentum for the U.S.-led coalition. As President Donald Trump and Russian President Vladimir Putin met at the G20 Summit in Hamburg, Germany, on July 7, the Pentagon announced a ceasefire deal brokered in cooperation with the Russian Defense Ministry regarding southwestern Syria, the site of increasing clashes between OIR personnel and pro-regime Syrian forces that have threatened to distract coalition forces from their focus on ISIS.

With a close of operations against ISIS in Mosul and fewer incursions by pro-regime goons at deconfliction zones like the At Tanf, the U.S. can now refocus its efforts entirely on exterminating ISIS in war-torn Syria.

ISIS militants have scattered to spider-holes in smaller villages across Iraq, while the bulk of the terror group’s remaining forces are surrounded in their “capital” of Raqqa by Syrian Democratic Forces, Kurdish fighters, and M777 howitzer-toting Marines. It appears the coalition may finally succeed in flushing the jihadists from major cities.

“Make no mistake: this victory alone does not eliminate ISIS and there is still a tough fight ahead,” Townshend added. “But the loss of one of its twin capitals and the jewel of the so-called caliphate is a decisive blow.”