The group’s de facto capital since early 2014, Raqqa is a jihadist springboard — the place where ISIS militants plan... 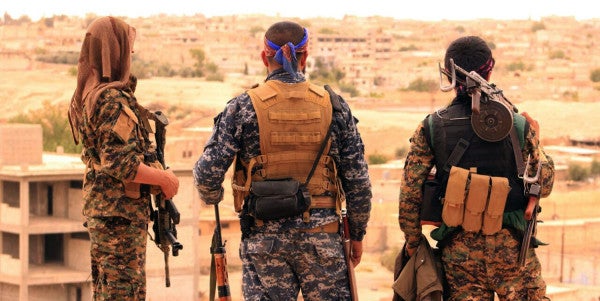 The group’s de facto capital since early 2014, Raqqa is a jihadist springboard — the place where ISIS militants plan attacks in Syria and across the world and the epicenter of its twisted experiment in brutal self-governance. Now, backed by U.S. military advisers and punishing airstrikes, the Kurdish and Arab Syrian Democratic Forces have the city surrounded on three sides.

The way forward won’t be easy. ISIS has transformed the city into a veritable fortress — riddled with vehicle-borne IEDs, booby traps, and snipers — which coalition-backed forces will have to take street by street as the Iraqi Security Forces have done during the months-long battle for Mosul. But with the group hounded by airstrikes and cut off from reinforcements, it’s only a matter of time before ISIS loses Raqqa.

However, the city’s fall won’t be the end of ISIS, and any talk of its demise is extremely premature. ISIS is defined by its barbarity and adaptability, relying on a unique brand of brutality and social media savvy to position itself as the world’s preeminent terrorist organization — and just as they did after recent losses in places like Ramadi and al Bab, the group’s fighters will regroup elsewhere, licking their wounds and lying in wait to fight another day.

It’s true that, for its more hardcore adherents, the group’s heyday is now largely over: Pressured on multiple fronts, it has lost fighters and bled territory, nearly 60,000 square kilometers since 2014, Col. Ryan S. Dillon, a spokesman for Operation Inherent Resolve, told Task & Purpose. Revenue streams have dried up and precision airstrikes have decimated its upper echelons. What was once a transnational pseudo-state has rapidly shrunk, and even the group’s most die-hard defenders probably now see the writing on the wall: Raqqa, the throbbing heart of the Caliphate, is set to fall.

But ISIS, like so many other terrorist networks, is a hydra: Cut off the head, and several more rise up to take its place. As with Mosul, many leading ISIS figures in Raqqa have almost certainly already skipped town, leaving the city’s defense to rank-and-file cannon fodder ready to die for the cause.

“We’ve seen indications of ISIS setting up shop elsewhere, relocating leadership and attack cells from Raqqa down to the city of Mayadin in Deir el-Zour province,” Christopher Kozak, a Syria analyst at the Institute for the Study of War, told Task & Purpose. In doing so, the group has moved to ensure that its institutional knowledge and most influential members are not in Raqqa when the heat really turns up.

In this Tuesday, March 7, 2017 frame grab from video provided by Arab 24 network, shows U.S. forces take up positions on the outskirts of the Syrian town, Manbij, a flashpoint between Turkish troops and allied Syrian fighters and U.S.-backed Kurdish fighters, in al-Asaliyah village, Aleppo province, Syria.

This routine scattering of jihadist thinkers and planners does not bode well for future counterterrorism efforts. Defense Secretary James Mattis is clearly aware of this, saying in mid-May that the United States’ “annihilation campaign” is now aimed at surrounding and crushing the group in the areas it controls, rather than just pushing it into other areas. According to Kozak, this could involve moving to seize territory along Raqqa’s southern border, cutting off the last true path of escape. But because many high-level operatives have already left the city, it’s hard not to wonder whether the shift in U.S. strategy is simply too little, too late.

Even if all of the group’s Syria-based fighters are killed, ISIS will live on in the ether. Let’s not lose sight of one driving force behind the coalition’s efforts: the group’s proven ability to direct or inspire attacks by homegrown jihadists against Western targets. The group has long since established itself as the ultimate distributed terror network — one that spreads its message through high-quality propaganda that make the guys on old al Qaeda tapes look like public access TV. Along the way, ISIS has picked up franchises and devotees across the Muslim world, allowing it to engrain its ideology in places from Nigeria to the Philippines. The vast majority of this proselytizing has taken place digitally, just as the group has used social media and encrypted communications technologies to connect with its supporters and recruit potential fighters. Chased from Raqqa or not, ISIS will always have a home on the internet.

So what will retaking Raqqa actually accomplish? For Kozar, losing the city will definitely represent a symbolic loss for the group even if it isn’t shattering blow: “Even if all goes to plan in the operation, we’ll still be left with an ISIS problem,” he told Task & Purpose. “The organization won’t simply disintegrate.”

It doesn’t help that the underlying issues that enabled the rise of ISIS are still present in both Syria and Iraq. In the latter, Sunni marginalization at the hands of the country’s Shiite majority still feeds extremist propaganda. The situation in the former — more than six years of brutal civil war — is even worse. Bashar al Assad is still president, lawlessness prevails, and fighters from all sides have succeeded in redrawing much of the country along sectarian lines. Hundreds of thousands of people have died in the conflict, critical infrastructure has been obliterated, and most institutions symbolizing normality (schools, adequately supplied hospitals, etc.) have long since ceased functioning across most of the country. Syria is the ideal situation for ISIS to survive and recalibrate in the aftermath of losing a stronghold to coalition forces.

According to Kozar, “We’re probably never going to totally defeat ISIS.” Rather than vowing to completely destroy the group, “the goal should be reducing it to a level where local security forces can effectively manage it.” That is not yet the case in Iraq, where ISIS still carries out attacks at will. And it’s even more unrealistic in Syria, where conditions could hardly be more favorable for a terrorist group to flourish.

For now, retaking Raqqa would be a step in the right direction. But ISIS will undoubtedly live on.