U.S.-executed decapitation strikes are eliminating key ISIS propaganda leaders and hacking away at the terror group’s ability to broadcast its... 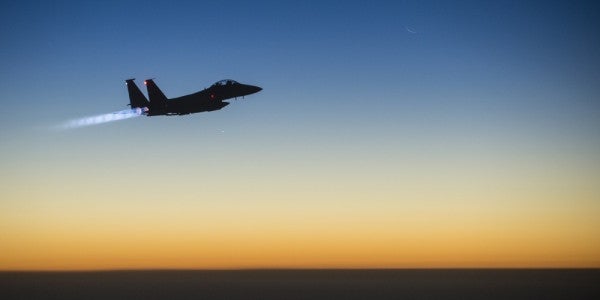 U.S.-executed decapitation strikes are eliminating key ISIS propaganda leaders and hacking away at the terror group’s ability to broadcast its jihadist message across the world from its dwindling holdfasts in Syria and Iraq, Operation Inherent Resolve announced on July 27.

Over the past several months, precision airstrikes conducted by U.S.-led coalition aircraft have eliminated a series of high-ranking militants serving in a variety of media and propaganda-centered roles, according to a press release from the coalition. The list, which includes targeted killings dating back to March, paints a striking picture of the U.S.-led campaign’s recent offensives against the group’s upper echelons.

Among the dead is Rayaan Meshaal, the chief and founder of ISIS’s Amaq News Agency, the group’s main news and propaganda platform. Meshaal, who the coalition says “oversaw, authorized and disseminated ISIS digital propaganda to instigate and direct terror and recruit foreign terrorist fighters,” was knocked off by a coalition strike in late May near the southeastern Syrian city of al Mayadin.

According to OIR, successful strikes also disposed of number of other top media leaders around Syria and Iraq, including Abu Sulayman al-Iraqi, a top official who oversaw propaganda efforts aimed at bringing in and indoctrinating fighters and directing attacks worldwide, and Bassam al-Jayfus, a money handler who played a role in the international money laundering system the group uses to fund foreign fighter contingencies and international terror cells. Others killed include Abu Khattab al-Rawi and Abu-Sayf al-‘Isawi, both media emirs; Abu Ali al-Janubi, a senior media director; and Ibrahim al-Ansari, a propaganda official.

The news comes at a time when ISIS is struggling to maintain a foothold amid devastating losses at the hands of Western-backed forces. Coalition planes have hammered the group with thousands of airstrikes and tens of thousands of bombs and missiles over the three-year U.S.-led campaign. Grinding offensives by local partner forces in both Iraq and Syria have rolled back vast swaths of ISIS-held territory and scored major victories against the jihadists, including the return of Mosul to Iraqi government control after nine months of brutal, street-by-street combat — and occasional alleged war crimes.

The fight for Raqqa, the group’s de facto capital in Syria, began June 6 and is now well underway; the U.S.-backed Syrian Democratic Forces, made up of Kurdish and Arab militiamen, now control 45% of the city, according to a July 27 tweet by OIR spokesman Col. Ryan Dillon.

Perhaps most notable is just how many ISIS fighters the U.S.-led coalition claims to have killed so far: somewhere between 60,000 and 70,000, according to recent comments by Gen. Raymond Thomas, the head of the U.S. Special Operations Command.

But while ISIS has been significantly weakened, the group is far from defeated. Wary of hunkering down in Raqqa and falling victim to the “annihilation campaign” Defense Secretary James Mattis detailed in May, top militants are believed to have fled the city for safe havens like al Mayadin. And the anti-ISIS coalition’s fight to fully retake Raqqa — already marked by booby traps, vehicle-borne improvised explosive devices, and heavy sniper fire — will be no easy task, a reality SDF leaders have openly acknowledged. Even if the city and other ISIS-held territories are taken back, many analysts predict that the group will transform into a more conventional insurgency.

But as the coalition continues to beat back ISIS on the ground, fighting the jihadi recruiters and ideologues who spread the twisted gospel of the Islamic State across the internet could prove just as important in the long run. Degrading ISIS’s web presence — which the terrorist organization has frequently used to claim and direct attacks (like the gruesome killing of an elderly French priest in Normandy in July 2016), recruit new members to fight on the battlefields of Iraq and Syria, and disseminate pro-ISIS propaganda — is an essential step in reducing the jihadists’ reach and future growth.

Backed further and further into the corners of its terrestrial heartland, the group could begin leaning more on web-based operations to maintain relevance among the ranks of international jihadists, inspiring homegrown terror attacks like those that have rocked Western Europe in recent months. In a September Foreign Policy article, Bridget Moreng warned that “ISIS will rely increasingly on upon its ‘virtual planners’ — members who operate in the dark spaces of the Internet — to inspire and coordinate attacks abroad,” as coalition forces roll up its territory and eliminate senior militants. As long as those ISIS-inspired “lone wolves” continue to target civilians in Western cities, the ISIS insurgency will live on far beyond the battlefields of Syria.

But with each top media leader it wipes out, OIR officials believe the U.S.-led coalition is moving closer toward its aim to fully “degrade, disrupt, and dismantle ISIS structures and remove the extremist terrorists throughout Syria in Iraq.” Time will tell whether that proves to be true in the rest of the world.