The US Coalition Has ISIS Surrounded In Raqqa

The noose is closing around ISIS’s neck in Syria — and the Pentagon is tightening the knot. The U.S.-backed Syrian... 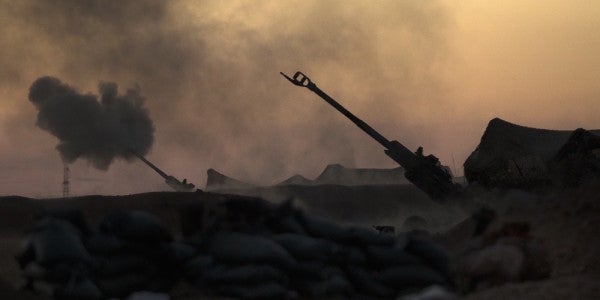 The noose is closing around ISIS’s neck in Syria — and the Pentagon is tightening the knot.

The U.S.-backed Syrian Democratic Forces have fully encircled ISIS’s de facto capital of Raqqa, according to the Syrian Observatory for Human Rights. Now, with the militants deprived of potential avenues to escape and regroup elsewhere in the war-torn country, the U.S.-led coalition is ready to apply the squeeze in line with the “annihilation campaign” detailed by Secretary of Defense James Mattis in May.

While the real battle for ISIS’s main Syrian stronghold kicked off June 6, the final assault comes after months of isolation operations led by the SDF, the coalition’s main ally on the ground. To entrap the group in Raqqa, coalition and SDF forces have methodically gobbled up villages and territory around the city, cutting off exit routes and penning militants within the confines of their holdfast.

The U.S military has played a crucial role in the fighting, embedding special operations forces and military advisers among SDF forces and pummeling ISIS positions from Marine firebases with M777-A2 howitzers. Coalition warplanes have also done their part to soften up the group, unleashing close to 10,000 airstrikes on ISIS targets across Syria. Now, with the city encircled and coalition-backed SDF forces battling militants in the streets, the plan is fully in place.

Encircling Raqqa “has been the SDF plan from the start,” a U.S. Central Command spokesman told The Independent,but“there is still much fighting to be done in the city.”

The move to encircle Raqqa seems to match the “annihilation campaign” described by Mattis back in May, a strategy aimed at completely surrounding ISIS fighters and leaving them no space to retreat. By surrounding the militants, Mattis hopes to prevent fighters from fleeing to safe havens in the ungoverned regions of Syria and Iraq, where they can regroup and lie in wait to attack again.

But there is a distinct possibility that the group, while deprived of its major territorial holdings, will be able to transition to more of a local insurgency, a destabilizing force with intentions to rebuild and rise once more. How Mattis’ annihilation campaign plays out in Raqqa will determine just far President Donald Trump’s promise to eliminate ISIS can actually go.

As with the U.S.-backed siege of Mosul by the Iraqi Security Forces — a grueling eight-month battle that Iraqi officials proclaimed all but over on June 29 — the Raqqa offensive will likely be a drawn-out, grinding fight. And as coalition-backed SDF forces push further into the city, the combat is sure to grow fiercer, with the hemmed-in militants forced into ever-shrinking quarters. Regardless, the city will almost certainly fall before the multinational coalition, and while ISIS still holds most of Raqqa as of June 29, its grip on the city is growing looser by the day.

“ISIS fighters, abandoned by their leadership, are being pressured by the SDF from multiple axes around the city,” OIR spokesman Col. Ryan S. Dillon said in a June 29 Twitter post, adding that “ISIS’ so-called caliphate is crumbling; from the outside and from within.”

But any observers patiently holding their breath for the ultimate destruction of ISIS should probably exhale. Analysts say that the group’s leaders, anticipating the drawn-out battle for Raqqa, have likely already shuttled high-ranking militants to other parts of Syria, including Deir el-Zour and Mayadeen city. The news isn’t much brighter online, where the group continues to maintain a robust internet and social media presence to bolster recruitment and encourage attacks abroad. While it will soon be deprived of both Mosul and Raqqa, ISIS will live on.