After doing virtually nothing to aid the multinational campaign against ISIS in Iraq and Syria, the Russian government claims it... 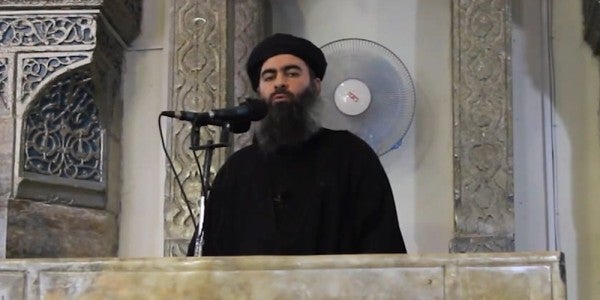 After doing virtually nothing to aid the multinational campaign against ISIS in Iraq and Syria, the Russian government claims it may have just changed the course of the global war on terror forever.

The Russian Defense Ministry says it is “looking into” whether it killed ISIS chief and self-described caliph Abu Bakr al Baghdadi with a May 28 airstrike on a meeting of jihadi leaders on the outskirts of Raqqa, the New York Times reports.

The airstrikes, carried out by Russian Sukhoi Su-34 and Su-35 medium-range fighter-bombers, targeted a summit of high-ranking members of ISIS’s “military council,” the Russian Ministry of Defense said in a statement June 16. The bombing run took out at least 30 mid-level ISIS field commanders and nearly 300 fighters providing security detail, according to Russia.

That ISIS meeting, the Russians said, was called to explore exit routes for ISIS fighters fleeing the U.S-led coalition assault on Raqqa, which coalition military personnel and U.S.-backed Syrian Democratic Forces have encircled in recent weeks as part of strategically and symbolically important push to liberate the jihadis’ de facto capital.

If true, the death of Baghdadi would represent a huge blow to ISIS forces under increasing pressure across the region. But the Russians’ claim to victory is sketchy, to say the least.

U.S. military personnel fighting ISIS as part of Operation Inherent Resolve are still scratching their heads over the alleged strike that the Russians say neutralized Baghdadi. The New York Times observes that the Russian statement “offered no explanation for the two-week delay in publicizing the airstrike,” though the Russian Defense Ministry stated that it had notified the Department of Defense of the strike ahead of time.

Pentagon air commanders operating out of the essential U.S. Central Command forward operating base at Al Udeid in Qatar are now “going back over the reports from May 28 and the subsequent days to see what the Russians had said about flight operations,” OIR spokesman Col. Ryan Dillon told the New York Times.

DoD commanders are throwing cold water on news of Baghdadi’s death. “We cannot confirm these reports at this time,” Dillon said. The Pentagon said in a statement to Reuters that it had “no information” corroborating the Russian account of Baghdadi’s death. Even a colonel with the Iraqi security forces told Reuters that Baghdadi “was not believed to have been in Raqqa” at the time of the Russian strike.

(Public affairs officials for the Department of Defense and Operation Inherent Resolve did not immediately respond to request for comment from Task & Purpose.)

Though the U.S.-led OIR coalition and Russia have regarded one another with caution and suspicion amid dueling operations in war-torn Syria, both militaries have been slowly squeezing ISIS leadership as they work to beat back the rising tide of jihadi extremism in the region. In April, U.S. special operations forces took out a chief adviser to Baghdadi during a rare raid in Syria.

The mystery of Baghdadi’s “death” is not a new story — premature reports of his demise have emerged before — but now it’s a question that will plague U.S.-led coalition commanders for the next few days. Whether Russia deserves any credit for taking out a huge chunk of ISIS leadership is another question entirely.