The U.S.-led coalition fighting ISIS in Syria has relocated its M142 High Mobility Artillery Rocket System (HIMARS) from Jordan to... 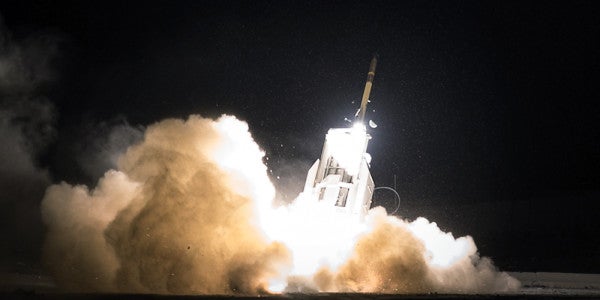 The U.S.-led coalition fighting ISIS in Syria has relocated its M142 High Mobility Artillery Rocket System (HIMARS) from Jordan to the At Tanf training garrison in the southern part of the country, the site of several defensive strikes against militants loyal to the Bashar al-Assad that have raised the specter of an outright war with the Syrian government, CNN reports.

Three Department of Defense officials told CNN that the HIMARS was moved into the region in response to pro-regime militias “deploying their own artillery” around the 55-kilometer At Tanf deconfliction zone on the Iraq-Syria border. The HIMARS was previously deployed in Turkey, Jordan, and Iraq to support the Syrian Democratic Forces’ siege of ISIS jihadis in their northern capital of Raqqa.

The deployment of the truck-mounted HIMARS, which can target enemies up to 70 kilometers away with an armament of six 227mm M270 rockets, marks a major escalation at the At Tanf garrison, previously utilized by U.S. and British special operations forces to train Syrian rebels in anti-ISIS tactics.

U.S.-led forces stationed at At Tanf as part of Operation Inherent Resolve have conducted three airstrikes in as many weeks in response to militia incursions into the deconfliction zone. On May 18, coalition forces bombed a pro-regime convoy; on June 6, they destroyed two artillery pieces and an anti-aircraft weapon; on June 8, strikes targeted two technicals that once against veered into coalition territory.

Shortly after media outlets reported on the third set of strikes on June 8, OIR officials announced that a F-15E Strike Eagle had shot down an Iranian-made unmanned aerial vehicle “about the size of an MQ-1 Predator” operated by pro-regime forces that “dropped one of several weapons it was carrying” near a coalition position.

After each incident at the At Tanf deconfliction zone, OIR spokesman Col. Ryan S. Dillon stated that while OIR “does not seek to fight Syrian regime or pro-regime forces,” coalition forces “remain ready to defend ourselves against any threat.”

Testifying before the Senate Armed Services Committee on June 13, Secretary of Defense James Mattis reaffirmed Dillon’s statement, arguing that that the escalating bombardments against pro-regime militias are “self-defense strikes.”

“The commander on the ground has the authority to take whatever action necessary,” said Mattis, “and I support that.”

But given the strategic importance of the territory surrounding At Tanf, it’s likely that tensions around the deconfliction zone will only climb. As Task & Purpose’s Danny Leffler observed after the double strikes of June 8, the steady ebbing of ISIS militants around major strongholds like Mosul in Iraq and Raqqa in northern Syria has offered an opening for closer coordination between the Assad regime and its regional partner, Iran.

The targeted pro-regime fighters may simply prove an occasional nuisance to the coalition forces at At Tanf. But if Damascus and Tehran continue to test OIR’s mettle, the addition of HIMARS to the At Tanf garrison might prove a worthy precaution.