As Syria’s War Rages On, The US Stumbles Forward Without A Map

More than six years after the Syrian revolution erupted, the country’s future is still hazy, clouded with the smoke of... 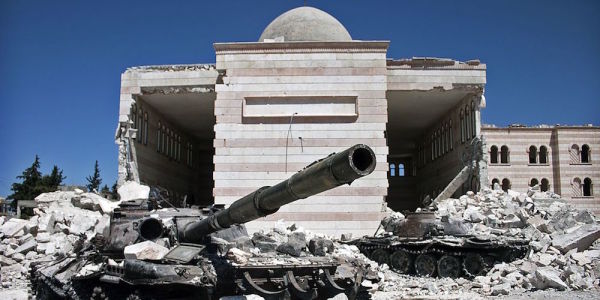 More than six years after the Syrian revolution erupted, the country’s future is still hazy, clouded with the smoke of mortars and the dust of flattened neighborhoods.

At least one thing is clear, however: The United States, despite pouring more than $14 billion into efforts to defeat ISIS, has yet to nail down a holistic approach to Syria’s conflict. Driven by shortsighted policies, Washington continues to lack an overarching strategy capable of yielding lasting solutions to end the violence and head off the power plays of long-standing foes.

The road to now

In 2011, as Syria’s revolution quickly spiraled into civil war, the reaction in the United States — war-weary after years of chasing militants across the dangerous frontiers of Afghanistan and Iraq — was one of quiet indifference.Most Americans, sick of the never-ending fighting, of the billions spent in far-off, hard-to-pronounce places, of the flag-draped caskets, simply didn’t want a leading role in yet another Middle Eastern conflict. Keenly aware of this, and of the civil war that NATO airstrikes against the Gaddafi regime in Libya helped inadvertently unleash, the Obama administration shied away from any kind of substantial involvement in the conflict. Instead, the White House pursued a hands-off approach — funneling assistance to vetted rebels but nixing any plans for major U.S. troop deployments, drawing red lines but opting for negotiated removals of chemical weapons stores — dipping a foot in the growing violence but too timid to take any real leap. Meanwhile, Syria burned.

A building burns in the western Syrian city of Homs after an alleged Syrian government airstrike.Wikimedia Commons photo

The Syria of today looks vastly different than it did before the war broke out. The country’s territory is a patchwork quilt of areas controlled by the Syrian government, ISIS, the Kurds, and an increasingly marginalized web of rebel groups. More than 460,000 people are believed to be either dead or missing and more than 5 million others have fled the country. The damage to Syria’s inflation-wracked economy could be nearing a trillion dollars. Across the country, sectarian fissures have widened as the war is increasingly fought along religious and ideological lines.

Despite Washington’s initial reticence to get involved, the United States was unable to avoid being sucked into the snowballing chaos, as the breakdown of Syrian government control and a destabilizing wave of arms and foreign fighters began creating near-perfect conditions for terrorist groups to flourish. By summer 2014, when a hardened group of Sunni militants stormed into the Iraqi city of Mosul and declared a transnational caliphate, U.S. policymakers could no longer ignore the rapidly degenerating situation; in early August, U.S. warplanes began launching targeted strikes against ISIS in northern Iraq.

To date, the anti-ISIS plan has largely worked. Backed by more than 24,000 airstrikes, local partner forces have clawed back vast swaths of land, roughly three-fourths of ISIS’s holdings in Iraq and around three-fifths of the land the group controlled in Syria. Iraqi troops supported by coalition forces retook Mosul in early July, and the battle for Raqqa, ISIS’s de facto capital in Syria, is steadily proceeding — the U.S.-backed Syrian Democratic Forces now control nearly half of the city, according to recent comments by OIR Spokesman Col. Ryan Dillon.

But while ISIS has been reduced to a shadow of its former strength, significant questions remain about how the United States plans to make sure the group won’t simply shapeshift into a more conventional insurgency and rebuild in Syria’s smoldering ashes.

A number of factors suggest it could do just that. Syrian government forces are pushing into swaths of eastern Syria formerly controlled by ISIS, an effort that has undoubtedly been eased by the U.S.-led coalition’s unrelenting blows against the group. With al Assad once again controlling these areas, many of the conditions that led to the group’s rise in the first place will continue to fester, especially among disenfranchised Sunnis who will once again find themselves under the boot of the regime. The prospect of more war crimes against civilians by Syrian forces, like those allegedly carried out by Iraqi government forces during the battle of Mosul, only bolsters this possibility.

Beneath the din of daily coalition airstrikes, a disheartening question duly rings: How effective, or lasting, will a military victory against ISIS be if it may just be sowing the ground for the whole process to someday restart again?

Cutting off the rebels

Recent U.S. actions regarding Syria’s rebels may be just as shortsighted. On July 19, reports surfaced that the Trump administration had discontinued a CIA program known as Timber Sycamore aimed at training and arming approved rebel groups. Trump, speaking about the decision in a July 25 Wall Street Journal interview, explained the decision to cancel the program by saying it was “a lot of al Qaeda we’re giving these weapons to.” That some of the weapons would wind up among al Qaeda-affiliated fighters was always a risk, given the complex constellation of rebel groups and the fluid alliances in which they operate. But pulling the plug could actually blow up in Washington’s face.

While the program certainly had issues — including a price tag exceeding $1 billion — it at least provided a steady channel between the United States and less-extreme rebel factions, and ending it further decreases U.S. influence on the ground in Syria. Moreover, killing the program could actually push moderate fighters into the waiting arms of al Qaeda’s affiliate in the country, a group known as Hayat Tahrir al-Sham (HTS), by far the best armed and strongest rebel group in Syria, a scenario Marc A. Thiessen aptly illustrated in a recent op-ed for the Washington Post.

“Right now, al-Qaeda has established itself as the tip of the sphere in the fight against the Assad regime,” Thiessen writes, “so many Sunnis who do not share al-Qaeda’s ideology are flocking to al Qaeda because it is the only game in town for fighting Assad.”

Considering that top U.S. officials continue to say al Assad has no real future as the leader of Syria, the decision to cut off aid to the remaining vetted groups taking on regime forces is more than a little perplexing.

Defense Secretary James Mattis and the Chairman of the Joint Chiefs of Staff, Marine Gen. Joseph F. Dunford, Jr., update the media on the defeat of the Islamic State of Iraq and Syria during a joint press conference at the Pentagon in Washington, D.C., May 19, 2017.DoD photo

“It’s great for al Qaeda’s messaging campaign that the U.S. has cancelled this program, regardless of how effective it actually was on the battlefield,” Genevieve Casagrande, a Syria analyst at the Institute for the Study of War, told Task & Purpose. “Al Qaeda can actually go to these groups and say ‘well, the U.S. has abandoned you. We are still here fighting for you. We are still here defending your women, defending your children.’”

The contradictions don’t stop there. On August 2, Michael Ratney, the State Department’s special envoy for Syria, released an Arabic-language statement to Syrian opposition groups. Among other things, Ratney cautioned rebel groups about getting too close to HTS and warned that it would be hard for the United States to prevent “international parties” from taking “military measures” against Idlib province, the last rebel-held province in the country, if HTS were to gain full control of the area. The State Department did not release the document in English, and when contacted by Task & Purpose, Drew Bailey, a DoS Press Outreach Officer, said “we don’t have an English version of this particular message.”

Questions about transparency aside, the message demonstrates just how bewildering U.S. policy on Syria has become: shortly after ending weapons transfers to vetted groups — the kinds of arms that would strengthen them vis-a-vis al Qaeda-affiliated fighters — Washington blasted out a terse warning about “the grave consequences” that could be visited on Idlib if HTS is able to seize total control there. More than anything, this message seems to reflect a willful dismissal of the currents driving the situation on the ground. Far weaker than the extremists who are steadily tightening their grip on the rebellion, what exactly does Washington expect these groups to do?

Washington never really wanted any part of the widening conflict in Syria. And, judging from his Twitter history, neither did Trump, even before he entered the Oval Office. But throughout the years, the fighting has evolved into much more than just a civil war — it is, in some ways, a refashioning of a region, an area the United States has long considered within its zone of influence. Now, after years of wavering, Washington risks being increasingly sidelined as other powers forcefully dictate Syria’s future.

We should stay the hell out of Syria, the "rebels" are just as bad as the current regime. WHAT WILL WE GET FOR OUR LIVES AND $ BILLIONS?ZERO

Like competing masters pushing pieces around a real-life chessboard, all of the major players involved have long-term strategic goals in mind. Iran, having supplied a steady stream of money, arms and fighters to bolster Assad, is using the conflict to shore up influence in Syria and stake out a land transportation corridor across the country it hopes will pay off for years to come. Russia, whose crucial air support has helped tip the scale in favor of al Assad, just signed a 49-year lease for al Khmeimim air base in the coastal province of Latakia. Hezbollah, too, is reaping gains from its indispensable support for Damascus; years of frontlines combat have transformed the Lebanese militia into a battle-hardened fighting force with growing influence both inside Syria and in Lebanon next door.

All this highlights a problem that has consistently dogged the United States since Syria’s revolution turned bloody: the continued failure to develop any sort of long-term plan for dealing with the conflict. With that has come the undeniable reality that, without a carefully considered Syria doctrine, America is destined to fumble along as the fighting drags on, implementing conflicting policies and failing to consider what their lasting consequences may be.