The US Has No Long-Term Plan In Syria, And That’s Dangerous

On June 13, coalition warplanes from the U.S.-led campaign against ISIS rained 28 airstrikes down across eastern Syria. Along the... 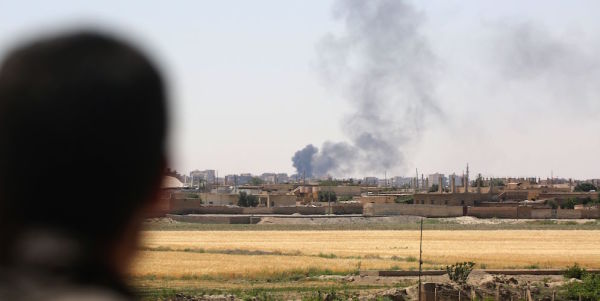 On June 13, coalition warplanes from the U.S.-led campaign against ISIS rained 28 airstrikes down across eastern Syria. Along the Jordanian border, coalition forces moved a long-range artillery system into a recently declared “de-confliction zone,” the first time the weapon system has made an appearance in the country’s south. A few hours to the north, U.S. special operations forces embedded with the Syrian Democratic Forces pushed deeper into Raqqa, ISIS’s de facto capital.

That same day, nearly 6,000 miles away, Task & Purpose asked U.S. Rep. Tom Cole, a Republican from Oklahoma, about the U.S government’s plan for Syria once ISIS is defeated. Cole, who sits on the Defense Subcommittee of the Appropriations Committee and has called for a new Authorization for the Use of Military Force in Syria, paused. “I don’t think a plan’s been fully formulated.”

As the United States and its allies slog toward their final goal of toppling the so-called caliphate of ISIS, decision-makers in Washington have no real plan for what comes next. The results could be disastrous.

A pair of U.S. Air Force F-15E Strike Eagles fly over northern Iraq early in the morning of Sept. 23, 2014, after conducting airstrikes in Syria.

We are now nearly three years into Operation Inherent Resolve, the U.S.-led military effort to defeat ISIS initiated under President Barack Obama. The campaign’s raw numbers are staggering: More than 22,600 airstrikes, nearly 9,650 of them in Syria; more than 84,000 bombs and missiles used against the group; tens of thousands of militants killed by coalition-backed local forces and torrents of precision munitions dropped above the battlefield.

Without question, the coalition is making progress. ISIS is significantly weakened, having lost nearly a fourth of its territory and several high-profile leaders in the last year. In Iraq, the jihadists are on the the verge of losing their stronghold in Mosul, the site of a grueling nine-month battle led by the Iraqi security forces. With pressure mounting, influxes of foreign recruits have slowed dramatically and vital revenue streams have begun evaporating.

The real fight for Raqqa is now underway. The U.S. military has played an enormous role in the offensive to retake the city, training and arming the Syrian Democratic Forces and hammering strategic ISIS positions in the area with repeated air and mortar strikes. The group will almost certainly lose Raqqa and, in time, be chased to the far reaches of Syria by a disparate group of coalition forces, their Arab and Kurdish partners on the ground, and forces fighting for the government of Syrian President Bashar al Assad — all of whom will then have to deal with each other.

A day will come that marks the end of large-scale military operations against ISIS, but it may resemble other so-called victories in the Global War On Terror, a declaration similar to President George W. Bush’s often-derided ‘‘Mission Accomplished” speech or President Barack Obama’s premature announcement about withdrawing troops from Iraq. With no clearly defined strategy, the United States is at risk of being dragged into fighting yet another protracted insurgency, being pulled into a possible military confrontation with Iran or Russia, or some combination of all three — a scenario that will only perpetuate the ruin wrought by Syria’s civil war and provide fertile ground for ISIS to flourish once again.

The Trump administration’s position on Syria has always been murky, apart from his campaign promise to “bomb the shit” out of ISIS. In April, the White House went from tacitly accepting Assad’s rule — White House Press Secretary Sean Spicer called it “a political reality” — to launching a barrage of cruise missiles at a Syrian air base in just a few days. The scramble to clarify the U.S. position following the strikes was marked by no less than five policy changes in a matter of two weeks, as The Guardian pointed out at the time, leaving observers guessing about Assad’s fate and what, if anything, might prompt future U.S. intervention in the region.

Syrian President Bashar al Assad, having clung to power throughout the country’s civil war, has vowed to retake all of Syria.

As coalition forces gird themselves for the protracted “annihilation” campaign that Secretary of Defense James Mattis outlined in May, the scope of U.S. strategy will remain crucial in determining the United States’ future involvement in Syria. Will Washington opt for a short-term outlook, working to crush ISIS militarily and then, following some arbitrary “victory” point, immediately withdraw, leaving allied militias fighting to ensure the jihadists don’t return? Or will the Pentagon find itself drawn into a long-term engagement in the country, caught between mopping up ISIS and the deeper regional rivalries at play in the war?

According to the Department of Defense, the choice might be an elementary school favorite: all of the above. The Pentagon doesn’t “currently envision maintaining a ‘permanent’ military presence in Syria after ISIS's defeat,” DoD spokesman Eric Pahon told Task & Purpose via email. But the U.S. military will, however, “provide support as necessary to ensure vetted local partners can provide security to prevent ISIS from re-establishing its networks.” In short: We’ll work with our local partners to make sure ISIS doesn’t regroup, but don’t look for some long-time commitment — the same “should I stay or should I go” logic that’s plagued the government's fraught efforts to extricate itself from battlefields in Iraq and Afghanistan. But given the complexity of Syria’s conflict, that roadmap could prove near impossible to follow.

While the collapse of the Assad regime once seemed plausible, it no longer seems likely any time soon. Crucial military support from Russia and Iran has rejuvenated the Assad war machine, and battlefield successes and sectarian population transfers have allowed the Syrian government to increase its holdings across the country. Emboldened, pro-regime forces have now turned their attention to Syria’s east, where they are steadily pushing into ISIS-held territory and openly clashed with the coalition-backed Syrian Democratic Forces on June 18.

This advance has serious implications for the future of ISIS and the coalition’s partners on the front lines.

A despot with a much higher death count than ISIS, Assad’s continued rule would virtually guarantee that the issues that fueled the group’s rise remain unaddressed. More than six years of brutal civil war have left the country deeply fractured along sectarian lines, and the number of people killed could now be approaching 500,000, according to the Syrian Center for Policy Research. The vast majority of rebels will never accept Assad — a man whose face has become synonymous with the barrel bombs that have showered down on schools and hospitals.

Members of the Syrian Democratic Forces walk in Raqqa on June 13.

And what will become of our local partners, those U.S.-armed Kurdish and Arab fighters, once the ISIS fight is over? The DoD doesn’t really seem to know or care. Pahon told Task & Purpose that “U.S. interaction with these forces is focused on the lasting defeat of ISIS,” and while they may have a role in security operations, “questions about the long-term roles of these forces would be better directed to local provisional councils.” If Assad’s forces continue to advance, who’s to say how long these local councils will exist — and in what capacity they’ll be able to focus resources on keeping ISIS at bay?

OIR’s public campaign design isn’t much help. The plan is divided into four phases, with the final stage — “Support Stabilization” — calling for the coalition to provide “security, planning, and required support to the government of Iraq and appropriate authorities in Syria.” Note the ambiguity here: We don’t even know who those authorities will be.

OIR spokesman Col. Ryan Dillon couldn’t provide any real answers about future plans either. “These are largely political questions outside of what it is that we have been directed to do: defeat ISIS,” Dillon told Task & Purpose via email. “[The] future presence of U.S. forces in Syria will be a political decision made by our leadership in Washington.”

The coalition deferring to decision-makers in Washington should be reassuring, given Trump’s recent, unusual move to place Mattis in charge of setting troop levels. But with top policy jobs temporarily occupied by Obama-era fill-ins — only five of the Pentagon’s most-senior 53 jobs have been filled — who is actually making those decisions? The State Department, where only a handful of more than 100 appointments have been confirmed, never responded to multiple inquiries from Task & Purpose.

Rep. Cole’s comments provide a stark illustration of the uncertainty in Congress about what’s happening in Syria. Cole described the idea of a military escalation with Iran as “certainly possible” adding that “removing ISIS and replacing it with Iranian-backed militias is hardly a situation we want to end up at.” But this is exactly where we could be heading: Having invested deeply in Assad, Tehran is playing a long game in Syria, gambling that the money and materiel it pours into the country will allow it to secure a lasting foothold there.

As part of this effort, pro-regime militias have repeatedly violated the U.S. de-confliction zone near the strategically important Tanf garrison over the past month or so. The moves, which analysts have described to Task & Purpose as a way for Iran to test the U.S. position in Syria, have been met by three coalition airstrikes against pro-regime fighters in the last month; coalition planes have also shot two armed Iranian-made drones out of the sky. The last thing Iran wants is any kind of long-term U.S. presence in Syria. According to U.S. Ambassador to the United Nations Nikki Haley, Washington feels the same way about Iran. If you’re not worrying about the possibility of a U.S.-Iran clash in Syria, now’s the time to start.

Escalating tensions with Russia could prove just as rocky. On June 18, a U.S. F/A-18 Super Hornet shot down a Syrian government plane that had dropped bombs close to fighters from the Syrian Democratic Forces near Tabqa, a critical town located to Raqqa’s southwest. The incident, the first time a U.S. jet has downed an Assad pilot, caused Russia’s Defense Ministry to suspend air coordination with the coalition over Syria’s crowded skies. Russia also threatened to track any coalition jets or drones that stray west of the Euphrates river, significantly increasing the chances of a confrontation between coalition and pro-regime forces.

Considering the trajectory of the conflict, and the potential for escalation, you’d think Washington would have well-developed plan in place. But judging by all appearances, you’d be wrong. Speaking on June 13, days before the sudden spike in tensions across Syria, Cole said he’d “leave it to the administration to see if they’ve got an endgame,” adding that “nobody I’m aware of in Congress has a clear idea about what that endgame will be.” Given the stakes at hand, Americans should find this uncertainty deeply disturbing.