The US Just Bombed Pro-Regime Forces In Syria — Again

U.S. Central Command has followed through on its pledge to strike Syrian militias when they threaten U.S.-led coalition troops fighting... 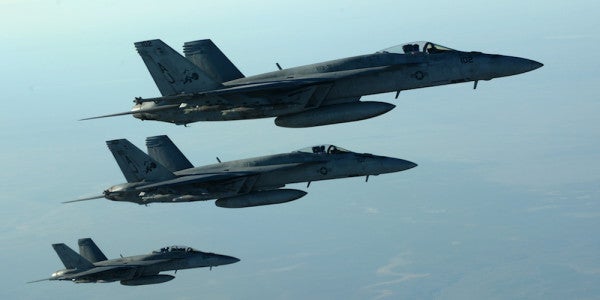 U.S. Central Command has followed through on its pledge to strike Syrian militias when they threaten U.S.-led coalition troops fighting ISIS in Syria. On June 6, coalition forces bombarded a convoy of fighters loyal to the regime of Syrian president Bashar al-Assad as it advanced on a small base in southeast Syria, CENTCOM said in a statement.

While the U.S.-led coalition is not officially at war with the Assad government, the Department of Defense has taken a more aggressive stance toward the regime since President Donald Trump ordered the launch of 59 missiles at the al-Shayrat military air base southeast of Homs.

In late May, U.S. aircraft dropped leaflets warning pro-regime militias to stay out of the deconfliction zone around the At Tanf Garrison, located at the Tanf border crossing between Syria and Iraq. U.S. and British special forces at that garrison recently trained two Syrian opposition groups to fight against ISIS.

The warning evidently went unheeded by the militias. On Tuesday, a convoy entered the 110 km-diameter deconfliction zone, posing a threat to coalition and partner forces, according to CENTCOM. The convoy reportedly included a tank, anti-aircraft weapons, armed technical vehicles, and more than 60 soldiers.

After several more warnings went unheeded, the coalition called in an airstrike, “destroying two artillery pieces, an anti-aircraft weapon, and damaging a tank,” CENTCOM said in a statement.

The strike marks the second time the coalition has targeted pro-government forces near the base. On May 18, U.S. airstrikes struck a convoy of pro-regime militants approaching Tanf, resulting in the destruction of a tank and bulldozer. The Pentagon believes the bulldozer was being used to construct a firebase on the edge of the deconfliction zone, Military Times reported.

Meanwhile, Reuters reported last week that Syrian rebels say they are receiving more arms from the U.S. and its allies to help fend off the militants, and CENTCOM told Military Times that coalition forces “are prepared to defend themselves if pro-regime forces refuse to vacate the deconfliction zone.”

Escalating tensions in southern Syria raise the troubling possibility of a full-blown confrontation between ground forces technically not at war with each other. CENTCOM, tied up in the coalition siege of ISIS’s de facto capital in Raqqa, made clear in its statement that it’s committed to avoiding such an outcome.

The dropping of the leaflets in late May coincided with the arrival of pro-regime militias from both Iraq and Syria, which have been amassing near the Tanf border crossing over the past several weeks. One group, a Shiite militia called Katib Imam Ali, positioned “a large number of forces to include tanks and technicals” just outside the deconfliction zone, according to Military Times.

The Syrian regime is backed by Iran, and the two countries are determined to open a supply corridor between Iraq and Syria that runs directly through the area where the At Tanf Garrison is located. Both of the opposition groups being trained by coalition forces there have been involved in insurgent operations in the past, making the base an even more appealing target for pro-regime forces.

“The Coalition calls on all parties in southern Syria to focus their efforts on the defeat of ISIS, which is our common enemy and the greatest threat to regional and worldwide peace and security,” CENTCOM said.