Syrian militias fighting in support of the Bashar al-Assad regime are reportedly amassing near a small base manned by coalition... 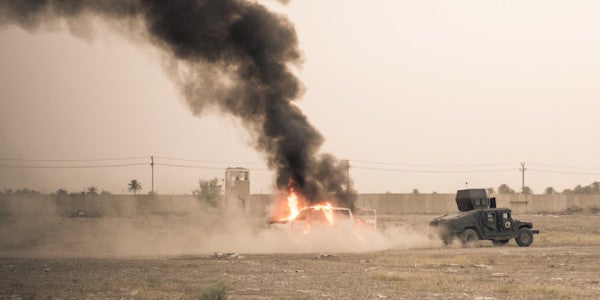 Syrian militias fighting in support of the Bashar al-Assad regime are reportedly amassing near a small base manned by coalition forces in southeast Syria, raising concerns of a looming confrontation between ground forces technically not at war with each other, according to Military Times.

The news seems to signal that tensions between the coalition and the Assad regime are escalating in southeast Syria, where U.S. bombs struck a convoy of pro-government militants on May 18.

Over the weekend, U.S. aircraft dropped leaflets warning pro-regime militants to stay out of the deconfliction zone around the base, which is located at the Tanf border crossing between Syria and Iraq. The garrison is used by U.S. and British special forces to train two Syrian opposition groups for the fight against ISIS.

U.S. Central Command officials told Military Times that hundreds of pro-regime militants have amassed in the vicinity of the deconfliction zone — which is 55-kilometers in radius — posing a “direct threat” to coalition forces at Tanf.

Coalition forces stationed at Tanf have been tested before. On May 18, U.S. airstrikes struck a convoy of pro-regime militants approaching Tanf, resulting in the destruction of a a tank and bulldozer. The Pentagon believes the bulldozer was being used to construct a firebase on the edge of the deconfliction zone, Military Times reports.

And in April, ISIS militants launched a complex assault on the base using a vehicle-borne IED and between 20-30 fighters, who were ultimately repelled after an intense battle.

According to Military Times, both opposition groups receiving coalition training at Tanf have been involved in anti-regime operations in the past. While the U.S. has not officially declared war on the Syrian regime, two U.S. Navy warships, the USS Ross and USS Porter, fired 59 Tomahawk cruise missiles at Al Shayrat Airfield, a regime base near the western city of Homs, in early April, marking the first time the U.S. targeted Syrian government forces.

Meanwhile, Reuters reports that Syrian rebels say they are receiving more arms from the U.S. and its allies to help fend off the militants — a claim that has not yet been confirmed by the Pentagon. The militants are backed by Iran, which, according to Reuters, is determined to open a supply corridor between Iraq and Syria that runs directly through the area.

The dropping of the leaflets coincided with the arrival of members of a Shiite militia called Katib Imam Ali from Iraq, which has links to Iran. The group positioned a “large number of forces to include tanks and technicals — modified pickup trucks with mounted heavy machine guns — just outside the 55-kilometer zone,” Military Times reports .

Syria’s bloody civil war is approaching a critical juncture as U.S.-backed forces prepare to launch a major assault on the ISIS stronghold of Raqqa, located in the north of the country. On May 30, the U.S. began arming Syrian Kurdish fighters for the first time in anticipation of the battle.

What will happen to the U.S.-backed Syrian groups trained and armed for the fight against ISIS after that phase of the war is over is a major point of concern for both the Syrian regime and Iran, and the arrival of more pro-Assad forces in southeast Syria indicates that a fight for territory may be on the horizon.

“The Americans will not be allowed to control the border,” Hadi al-Amiri, the leader of a pro-Assad Iraqi militia that recently moved into the area, said in an interview with Lebanese news station al-Mayadeen TV on May 30.