As Russia And The US Clash, Iran Ramps Up Involvement In The Syrian Civil War

Iran lobbed several missiles at ISIS targets in eastern Syria on June 18, the first time the regime has fired... 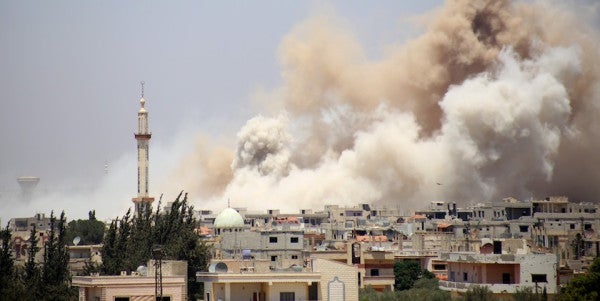 Iran lobbed several missiles at ISIS targets in eastern Syria on June 18, the first time the regime has fired rockets at another country in three decades and a significant escalation of its military involvement in Syria’s bloody civil war, CNN reports.

On June 18, Iran’s Islamic Revolutionary Guard Corps (IRGC) announced that it had deployed several “ground-to-ground, mid-range missiles” from a base in western Iran at ISIS forces in the Deir Ezzor region, according to CNN. The strikes were carried out in retaliation for twin ISIS attacks in Tehran that killed at least 16 people at Iran’s Parliament and a shrine dedicated to the country’s revolutionary founder, Ayatollah Khomeini.

The strikes came amid two other significant “firsts” in the Syrian civil war: the downing of a Syrian regime warplane by a U.S. fighter jet, and a vow from the Russian government to treat any coalition aircraft in Syria as an enemy target.

All three incidents indicate that the brutal conflict is on the verge of entering a new phase that could pit world powers against each other in direct confrontation at the risk of losing momentum in the fight against their mutual enemy of ISIS.

Iran and Russia are the two chief allies of Syrian President Bashar al-Assad, whose forces are fighting a war against myriad anti-government and jihadist militant groups, including ISIS. The terrorist group is primarily based in the Syrian city of Raqqa, currently under siege by coalition-backed Kurdish forces, who, like most of the militias supported by the U.S.-led coalition as part of Operation Inherent Resolve, are considered an enemy of the regime.

Until now, Iran’s support for the Assad regime has been limited to providing money, military advisers, volunteers, and the mass deployment of Iranian-backed Hezbollah fighters to Syria. But as the U.S. ramps up operations in the country and wards off attacks against regional allies by pro-regime forces, the stakes are becoming much higher.

“The selection of targets is interesting,” Lt. Col (ret) Rick Francona, a CNN military analyst, said of Iran’s missile strikes. “They say they are firing at the same people who planned the attacks in Tehran but it also bolsters the Syrian army effort right now.”

Iran and Syria are determined to establish a “Shiite” supply corridor between Iran and Syria that would run directly through territory on the Iraq-Syria border that is currently controlled by coalition forces based out of the At Tanf garrison. The coalition has conducted several airstrikes in the past month in response to incursions into the deconfliction zone around At Tanf, destroying militia convoys, technicals, and artillery weapons.

The Syrian civil war began in the spring of 2011 after government security forces brutally cracked down on a protest movement calling for the removal of Assad. It has since become a proxy war divided along sectarian lines, with Shiite-majority Iran on one side and Sunni-majority Saudi Arabia, a key U.S. ally, on the other. Iran has accused Saudi Arabia of supporting ISIS in the Tehran attacks.

“The Coalition’s mission is to defeat ISIS in Iraq and Syria,” An OIR spokesman reiterated in a statement after a U.S. F/A-18E Super Hornet shot down a Syrian Air Force SU-22 . “The Coalition does not seek to fight Syrian regime, Russian, or pro-regime forces partnered with them, but will not hesitate to defend Coalition or partner forces from any threat.”