The White House on June 26 alleged that the Syrian government is preparing for an imminent chemical weapons attack against... 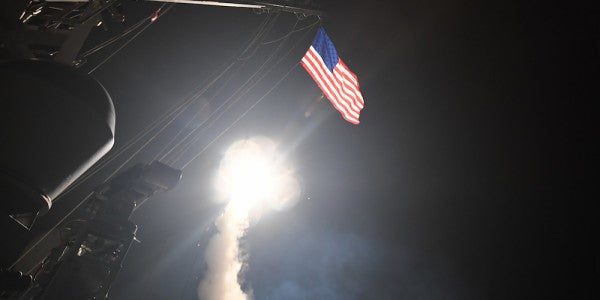 The White House on June 26 alleged that the Syrian government is preparing for an imminent chemical weapons attack against rebel targets that would “result in the mass murder of civilians, including innocent children,” calling it an act for which President Bashar al-Assad and his military “will pay a heavy price” should they proceed.

When reached for comment by Task & Purpose, U.S. Central Command released a cryptic statement: “For this matter, we have no information to add to what has already been stated.”

The surprise statement appears to have caught even the Department of Defense off guard. Several Pentagon officials reached by BuzzFeed News said they “not only did not know where the potential chemical attack would come from, but they had no idea that the White House would release its statement.”

The shot across the bow to the Assad regime came just over a week after an F/A-18E Super Hornet downed a Syrian Su-22 fighter-bomber that targeted coalition forces engaged in combat with ISIS militants as part of Operation Inherent Resolve. The shootdown, the latest in a series of violent clashes between U.S.-backed and Assad-aligned forces in the war-torn country, has sent tensions in the regions to an unprecedented high.

In April, President Donald Trump ordered two U.S. Navy ships in the eastern Mediterranean Sea, the USS Ross and USS Porter, to fire 59 Tomahawk missiles at the al-Shayrat military air base southeast of the city of Homs in response to the Syrian military’s alleged used of chemical weapons against rebels in the country’s northern Idlib governorate.

At the time, U.S. officials told reporters that Trump “had been deeply shaken by graphic photos of Syrian children gasping for breath and dying as a result of the chemical weapons” deployed by Assad forces, the New York Times reports.

The U.S. government appears to be girding itself for an inevitable clash not just with Syria, but with regional allies Russia and Iran. Writing on Twitter on June 26, U.S. Ambassador to the UN Nikki Haley echoed the White House’s statement. “Any further attacks done to the people of Syria will be blamed on Assad, but also on Russia and Iran who support him killing his own people.”

Despite this strong rhetoric, there’s still a lot we don’t know about this alleged chemical weapons attack — and members of the defense and intelligence community appear in the same boat. In a curt response to an inquiry from the New York Times, Director of National Intelligence spokesman Brian Hale borrowed a page from White House Press Secretary Sean Spicer’s press briefing playbook: “We are letting the statement speak for itself.”