The US Just Launched Tomahawk Missiles At Syrian Government Targets

The U.S. military has launched about 60 missiles at the al-Shayrat military airbase south-east of Homs in Syria, NBC News... 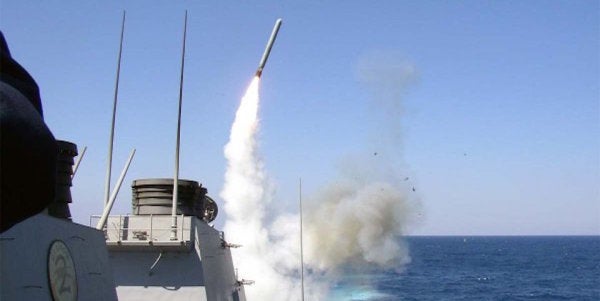 The U.S. military has launched about 60 missiles at the al-Shayrat military airbase south-east of Homs in Syria, NBC News reported on Thursday. The attack represents the first major deployment of American military force by President Donald Trump since he first assumed office.

In a statement Thursday evening, Trump declared that it is in the U.S.'s “vital national security interests … to prevent the spread and use of chemical weapons,” calling on “civilized nations” to ” the slaughter and bloodshed in Syria,” Reuters reported.

Officials from the Pentagon and White House, including Secretary of Defense James Mattis and National Security Adviser H.R. McMaster, had met Thursday to discuss options for a military intervention in the war-torn country in the aftermath of chemical weapons attacks purportedly carried out by the President Bashar al-Assad.

Rep. Adam Schiff, a ranking member of the House Permanent Select Committee on Intelligence, confirmed that the target airbase was where the fixed-wing aircraft involved in the Tuesday chemical attack against Syrian rebels in the village of Khan Shaykhun in the country’s northern Idlib governorate.

The strikes represent a stark change in the government’s stance towards the Assad regime. In a press conference Thursday, Secretary of State Rex Tillerson stated that “Assad’s role in the future is uncertain clearly, and with the acts that he has taken it would seem that there would be no role for him to govern the Syrian people.”

Reports suggest that the images of children affected by toxic gas that crisscrossed the globe in the aftermath of the Tuesday chemical attacks appeared to have a dramatic impact on the president.

“That attack on children yesterday had a big impact on me—big impact,” Trump said during a press conference in the White House Rose Garden on Wednesday. “It crossed a lot of lines for me. When you kill innocent children, innocent babies… that crosses many, many lines, beyond a red line. Many, many lines.”

Syrian state TV responded to the strikes by stating that “American aggression targets Syrian military targets with a number of missiles.”

Appearing on MSNBC, Retired Adm. James Stavridis called the volley of cruise missiles a “fairly correct response” to the use of chemical weapons by forces loyal to the Assad government. A White House official characterized the strikes as a “necessary but proportionate … warning shot to Assad.”