A U.S. F-15E Strike Eagle fighter jet shot down an Iranian-made Shahed 129 drone that was armed and within firing... 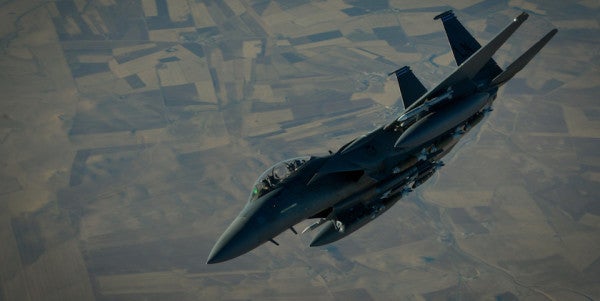 A U.S. F-15E Strike Eagle fighter jet shot down an Iranian-made Shahed 129 drone that was armed and within firing range of coalition troops in southern Syria on June 20, according to representatives of Operation Inherent Resolve.

The incident comes amid rising tensions between coalition forces and the regime of Syrian President Bashar al-Assad, which is backed by Russia and Iran. It marks the second time this month a U.S. jet downed a Shahed 129 in the area.

“The Coalition forces were manning an established combat outpost to the northeast of at Tanf, where they are training and advising partner ground forces in the fight against ISIS,” OIR said. “This is the same location where another pro-regime UAV dropped munitions near Coalition forces before it was shot down, June 8.”

The At Tanf garrison is located on the Iraq-Syria border, a crucial juncture along a supply corridor that the Iranian and Syrian governments have been determined to establish. The area recently became a battleground as pro-regime forces repeatedly attempted to enter the 55-kilometer deconfliction zone that encircles the base, each time eliciting a swift and brutal response from U.S. Central Command. The drone shot down on June 20 was “just outside” the deconfliction zone, according to U.S. officials who spoke to CNN.

While the U.S.-led coalition is not technically at war with the Syrian regime — despite President Donald Trump’s Tomahawk missile strike against a military airbase in April in response to the regime’s use of chemical weapons — clashes between coalition forces and militias loyal to Assad have become frequent enough that the Syrian Civil War is on the verge of entering a new phase that could pit world powers against each other in a direct confrontation.

“The Coalition’s mission is to defeat ISIS in Iraq and Syria,” OIR reiterated in a statement on June 18 after a U.S. fighter jet shot down a Syrian Air Force SU-22 jet that was bombarding coalition-backed Syrian Democratic Forces. “The Coalition does not seek to fight Syrian regime, Russian, or pro-regime forces partnered with them, but will not hesitate to defend Coalition or partner forces from any threat.”

Following the downing of the Syrian warplane, the Russian government vowed to treat any coalition aircraft in Syria as an enemy target.

Also on June 18, Iran’s Islamic Revolutionary Guard Corps announced that it had deployed several “ground-to-ground, mid-range missiles” from a base in western Iran at ISIS forces in the Deir Ezzor region, marking the first time Iran had fired rockets at another country in three decades and a significant escalation of its military involvement in Syria’s civil war.

Meanwhile, in northern Syria, the ISIS stronghold of Raqqa is currently under siege by coalition-backed Kurdish forces, who, like most of the militias supported by the U.S.-led coalition as part of Operation Inherent Resolve, are considered an enemy of the regime.

The coalition’s alliance with armed groups that have previously been involved in anti-regime operations means that the formation of a unified front against ISIS in Syria is extremely unlikely. Still, the coalition appears hopeful:

“The Coalition calls on all parties to focus their efforts on the defeat of ISIS, which is our common enemy and the greatest threat to regional and worldwide peace and security,” OIR said on June 20.