The U.S. European Command has just released a series of photos that captured a recent mid-air tango between a U.S.... 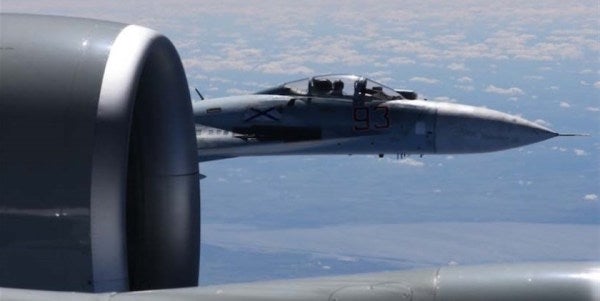 The U.S. European Command has just released a series of photos that captured a recent mid-air tango between a U.S. RC135U surveillance plane and an armed Russian SU-27 Flanker that occurred over the Baltic Sea this week.

EUCOM claims the RC135 was flying in international airspace on June 19 when it was intercepted by the SU-27. “Due to the high rate of closure speed and poor control of the aircraft during the intercept, this interaction was determined to be unsafe,” EUCOM said in a statement.

The command’s criticism of the SU-27 pilot’s jet-flying skills could be a response to a recent video that aired on the Russian military’s TV Station Zvedza, which showed a NATO F-16 buzzing Russian Defense Minister Sergey Shoigu’s jet on June 21 in the same vicinity of the June 19 incident.

In the video, a Russian military “expert” called the F-16 pilot, who was probably Polish, an American “air pirate,” saying, “Thank God that the Armed Forces of the Russian Federation are headed by a sensible person, and thank God that our fighter acted beyond all praise.”

NATO called that interdiction “routine,” claiming that the Russian planes had failed to respond to air traffic control. “We have not changed our procedures in response to recent events,” a NATO official told Stars and Stripes.

That NATO intercept came a day after the Navy downed a Syrian SU-22 jet, which U.S. Central Command said posed a threat to coalition-back Syrian Democratic Forces fighting ISIS. Moscow responded by vowing to shoot down any U.S. warplanes flying over Syria west of the Euphrates.

President Trump campaigned on a promise to mend relations between the U.S. and Russia; however, tensions have only escalated since he took office, thanks in part to the war in Syria, which has become a proxy conflict between global powers, with Russia and Iran backing the Syrian regime and the U.S.-led coalition bolstering rebel groups determined to overthrow President Bashar al-Assad.

“The Coalition’s mission is to defeat ISIS in Iraq and Syria,” Operation Inherent Resolve reiterated in a statement on June 18. “The Coalition does not seek to fight Syrian regime, Russian, or pro-regime forces partnered with them, but will not hesitate to defend Coalition or partner forces from any threat.”