The security lockdown at RAF Mildenhall went as well as could be expected. Just minutes after his reported “attempt to... 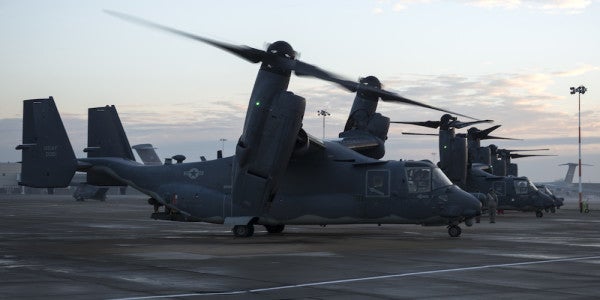 The security lockdown at RAF Mildenhall went as well as could be expected. Just minutes after his reported “attempt to ram” a security checkpoint at the U.S. Air Force base outside Suffolk, England, on Dec. 18, a 44-year-old British man was swiftly detained by American military personnel and British law enforcement. Nobody was injured during the “security incident”; the intruder sustained only a few “cuts and bruises,” despite the fact that American service members fired off rounds during the incident; according to the Suffolk police, the breach “is not being treated as terrorism,” and the suspect was detained under the UK’s mental health laws.

But new footage shows that the intruder’s vehicle managed to travel deeper into the base than previously suggested. The footage, shot from a BBC News helicopter, shows the intruder’s black car stationary near a CV-22 Osprey on Mildenhall’s flight line.

“We aren’t commenting officially,” a Suffolk police spokesman told Stars and Stripes on Dec. 20, ” you can see for yourself where the car ended up from the video.”

While U.S. Air Forces-Europe spokesmen Capt. Lauren Ott told Stars and Stripes that damage to the Osprey was “negligible,” a more significant collision with a fuel-laden Osprey could have proven disastrous. While it’s unclear whether the Osprey was fully gassed up, the CV-22 in the video can carry up to 2,025 gallons of fuel — an explosive target for any would-be attacker.

Even if the wayward Brit’s joyride didn’t set off a Michael Bay-style explosion with the Osprey, there were plenty of other explodey targets in the neighborhood. Mildenhall is home to the 352nd Special Operations Wing, with six squadrons of Ospreys and MC-130J Commando II aircraft, and the 100th Air Refueling Wing, whose KC-135 Stratotankers carry out refueling exercises throughout the DoD’s European and African area of responsibility.

The Air Force facility at Mildenhall was originally slated for closure by 2023, along with some 14 other U.S. European Command bases across the region. But in April 2017, EUCOM stated that it was reconsidering the move in light of the “current European security environment”; given the deployment of U.S. troops and militaryassets to eastern Europe to counter an increasingly bellicose Russia, it seems likely that Mildenhall, the largest of the 15 bases set to close in 2015, will remain open.

With the military’s reorientation towards Europe, the near-miss at Mildenhall may give U.S. military officials pause. Suffolk police emphasized that the incident did not appear to be a pre-planned attack and that “there is no wider threat to the public or occupants,” but the New York Times notes that would-be Islamic extremist Junead Ahmed Khan was convicted in 2015 of plotting to attack U.S. military bases (and their roughly 18,000 personnel) across the United Kingdom.

How the latest run-in will impact force protection at Mildenhall remains unclear. But according USAFE spokesman Ott emphasized in a Dec. 20 statement that the Air Force isn’t taking the incident lightly.

“We do not discuss specific security measures at military installations,” Ott told Stars and Stripes. “However, we can confirm that our security measures remain multilayered and under constant review in coordination with both USAF and host nation to protect our personnel, their families and the surrounding community.”