13 Years Later, A Fallujah Marine Finally Gets The Silver Star He Deserves

From day one, the November 2004 offensive to clear Fallujah, Iraq, of enemy fighters was a grueling block-by-block fight. Deadly... 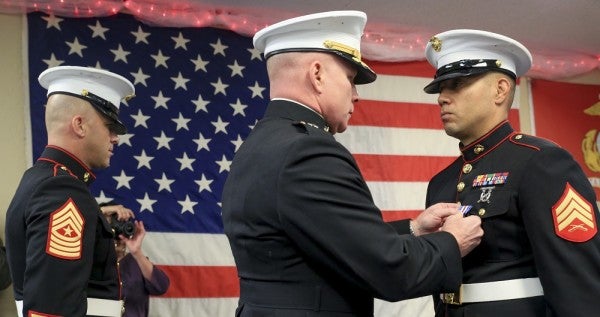 From day one, the November 2004 offensive to clear Fallujah, Iraq, of enemy fighters was a grueling block-by-block fight. Deadly ambushes, booby-trapped houses, and an entrenched and well-prepared force of insurgent fighters harried the Marines every step of the way forward during the Second Battle of Fallujah. Eight days into the fight, it was just as unforgiving.

On Nov. 15, then-Cpl. Eubaldo Lovato, a squad leader with Alpha Company, 1st Battalion, 8th Marine Regiment, and his Marines had successfully cleared their sector of the city when they got word that another Marine, Lance Cpl. Travis Desiato, had been shot and killed and his body taken by enemy fighters.

Lovato, along with other NCOs from the unit, grouped up with Desiato’s squad leader and made their way to the house, where at least five enemy fighters were holed up in one of the rooms, fortified by sandbags, and armed with AKs. But Desiato’s body was still in there, and the Marines knew they had to get him back.

Desiato, who was newly married, “had a death note for his wife and I knew I needed to get that and his wedding ring,” Lovato told KJCT, a Montrose, Colorado-based ABC news affiliate.

However, the Marines couldn’t do it alone, so Lovato set out to get additional grenades and called for armored support. While running down an alley to regroup with other infantrymen and get resupplied, enemy marksmen spotted him and took fire.

“There was a roadway and alley so while I was running a bullet went thru my pocket and my sling,” Lovato told KJCT. “Missed my leg by inches and right here hit my sling. It's crazy you can feel the concussion of the bullet go right past your body.”

Related: 8 Unbelievable Stories From The Second Battle Of Fallujah »

After making it past the enemy’s shooters, Lovato got the munitions the Marines needed, and returned to the house with a tank in tow. They lobbed cannon and rocket fire through the window to dislodge the fighters, but even that wasn’t enough. They had to go back in. With grenades in hand, and Lovato in the lead, the Marines mounted not one, but three assaults on the room. On the last attempt, the Marines successfully cleared out the enemy fighters and recovered Desiato’s body.

In 2006, Lovato was awarded a Bronze Star with Valor for his bravery that day, but after 11 years, the Department of Defense upgraded his commendation. At a Nov. 18 award ceremony in Montrose, Colorado, where Lovato now lives after leaving the Marines as a sergeant nearly 14 years ago, he received the Silver Star, the nation’s third-highest decoration for bravery.

“Come hell or high water, they were going to get Desiato out of the house or they were going to die trying,” Brig. Gen. Michael Martin, the deputy commanding general of Marine Corps Forces Command, said at the ceremony, according to a press release.

Lovato’s Silver Star upgrade was a result of the Department of Defense Valor Award Review Board, established in January 2016 to look over hundreds of valor awards given since the start of the wars in Iraq and Afghanistan. The post-9/11 military's award process has long been criticized, especially with regard to the nation's highest awards for valor, according to Military Times, which reported in January that of the 1,300 awards for valor reviewed, fewer than 100 will receive upgrades.

As for Lovato, there is one Marine in particular whose sacrifice he wants to see remembered.

“To be completely honest, I don’t deserve this,” Lovato said.“I didn’t do anything different than what I was trained to do. But I appreciate it and I am going to wear it proudly because the person who does deserve this wasn’t able to make it home. He was a 19-year-old kid from Massachusetts who had just gotten married. I am going to wear this Silver Star for him. He is the one that made the ultimate sacrifice.”