UNSUNG HEROES: The Recon Marine Who Killed 18 Enemy Fighters In A Single Battle

On Aug. 8, 2008, in Farah province, Afghanistan, Cpl. Franklin Simmons was part of a small Marine force tasked with... 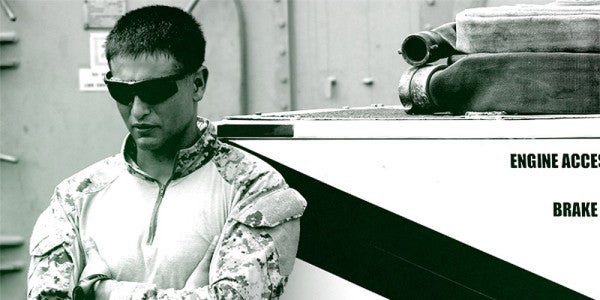 On Aug. 8, 2008, in Farah province, Afghanistan, Cpl. Franklin Simmons was part of a small Marine force tasked with clearing the city of Shewan of Taliban fighters.

More than 30 Marines from 2nd, Battalion, 7th Marine Regiment and 1st Force Reconnaissance Company were ordered to route the enemy, which outnumbered the Marines eight to one, according to a 2011 report by the San Diego Union-Tribune. Roughly 250 enemy fighters, many of them highly trained, were dug in along a treeline near Shewan.

Related: This Marine Provided Accurate Sniper And Rocket Fire To Save His Men »

Under the searing heat of the Afghan summer, the Marines faced brutal resistance from the city’s defenders as they advanced on foot and in Humvees. Enemy rockets and small arms stopped one of the Humvees in its tracks, leaving the Marines inside trapped and exposed.

With Marines stuck in the kill zone, Simmons, a team leader and designated marksman, moved to an exposed position on top of a berm where he had a better view of the enemy. As rounds impacted within a foot of his position, Simmons returned fire at the enemy.

“I thought that would be the spot to make my final stand,” said Simmons, in an interview with the Union-Tribune. “I started shooting as many as I could. By some miracle I didn’t get shot … I guess the big man upstairs had other plans.”

Simmons was deadly accurate, even under intense enemy fire. By the end of the eight-hour long battle, he had killed 18 enemy fighters, and wounded at least two others.

In recognition of his courage and extraordinary marksmanship, on July 4, 2011, while attached to the 13th Marine Expeditionary Unit, Simmons was awarded the Silver Star Medal during a ceremony aboard the USS Boxer.