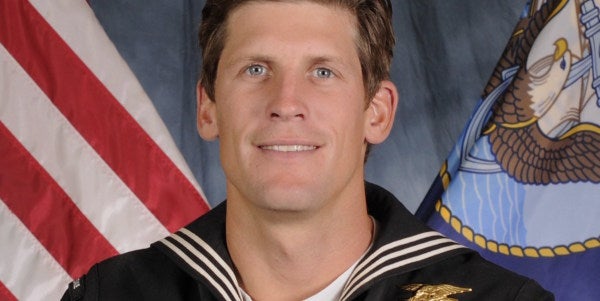 A Navy SEAL killed in May in a gunfight with Islamic State militants in northern Iraq had already distinguished himself on the battlefield during that deployment, earning the Silver Star — the nation's third-highest combat award — two months before.

Petty Officer 1st Class Charles H. Keating IV, 31, of San Diego, was killed May 3 in Tall Usquf, Iraq, after his team answered a call to support Peshmerga forces engaged with enemy fighters. The Peshmerga are the military forces of Iraqi Kurdistan and have been fighting the Islamic State in Iraq and Syria, or ISIS, since 2014.

Keating, who would be posthumously promoted to chief petty officer eight days after his death, was the senior enlisted adviser for a SEAL Team One advise-and-assist team supporting these local troops.

According to documents obtained by Military.com and first reported by CNN, Keating had played a key role in a March 4 operation that repelled more than 100 enemy fighters as they assaulted the Peshmerga front lines. According to his Silver Star citation, Keating took the lead as the friendly position came under attack, demonstrating “courageous leadership, tactical acumen, and physical courage.”

After directing the Peshmerga troops as they pushed back against the enemy assault, Keating coordinated with the U.S. quick-reaction force and himself engaged the militants, according to his citation.

“[Keating] continually exposed himself to enemy automatic weapon, mortar, and rocket propelled grenade fire as he diligently maneuvered between the front and flanks of the defensive fighting position to stop enemy advances and keep friendly forces accurately informed of the unfolding situation,” the document reads.

At one point, ISIS fighters attempted to send a vehicle carrying an improvised explosive device alongside Keating's position, according to the citation. The SEAL prevented them from succeeding by directing a team to intercept the vehicle with snipers and accurate rocket fire.

“His personal bravery inspired his comrades to vigorously defend their position and repel the enemy assault,” the citation reads, adding that Keating continued to train partner forces until he was killed in combat.

Keating would be awarded the Silver Star on May 10, seven days after his death. On the same day, he received a Purple Heart in recognition of the fatal combat wounds he received on May 3.

“There were bullets everywhere,” Warren said of the firefight.

While the enemy assaulted with dozens of vehicles, mortar systems, and even bulldozers, the Peshmerga were able to regain control of Tall Usquf.

Although U.S. troops are not formally in a combat role in the coalition fight against ISIS, Keating was the third American service member to die in combat in support of the fight against the militant group.