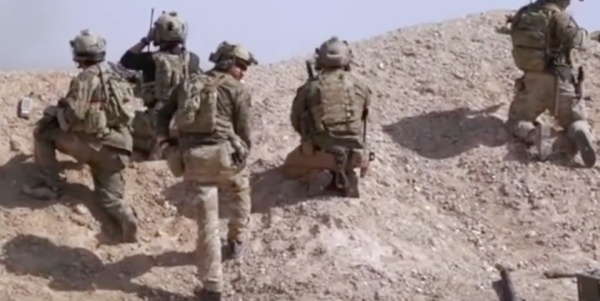 Two U.S. troops were wounded — one in Iraq and one in Syria — over the weekend by indirect fire in a sign of the increasing danger to U.S. forces as the campaign against ISIS accelerates, the Pentagon said Tuesday.

The American casualty in Syria was the first acknowledged by the Defense Department in the effort by Special Forces to train and advise an alliance of rebel groups focused on retaking the self-proclaimed capital of the Islamic State of Iraq and Syria in the northeastern city of Raqqa.

The other U.S. casualty occurred west of Irbil, the capital of the Kurdish region, where U.S. trainers and advisers have been assisting Kurdish Peshmerga fighters in the early stages of the push to retake Mosul, the main ISIS stronghold in northwestern Iraq.

The statement by the Pentagon that they were hit by “indirect fire” usually indicates that they were wounded by mortar, artillery or rocket fire rather than small arms.

In both cases, Capt. Jeff Davis, a Pentagon spokesman, declined to describe the nature or extent of the injuries to the U.S. service members. They were hurt badly enough to prevent their immediate return to duty, Davis said, but “We don’t talk in detail about our wounded because we don't want to telegraph battle-damage assessments to our enemy.”

Both of the wounded troops were “operating behind the forward line of troops (FLOT). They were not on the front lines, they were not engaged in active combat, they were not out trigger-pulling offensively,” Davis told Pentagon reporters.

According to The Washington Post, about 14 U.S. service members have been wounded since the start of the U.S. train, advise and assist mission on the ground began in the late spring and summer of 2014 as ISIS swept out of Syria to take over large swaths of territory in Iraq against little resistance from the Iraqi security forces.

Although they are limited to the train, advise and assist role, three U.S. service members — Special Forces Master Sgt. Joshua Wheeler; Marine Staff Sgt. Louis Cardin; and Chief Petty Officer Charles Keating IV, a Navy SEAL — have been killed in what the Pentagon has said was ground combat. Cardin was killed by ISIS rocket rife; Keating and Wheeler were killed in firefights, according to the Pentagon.

In his Memorial Day address at Arlington National Cemetery, President Barack Obama, who has authorized the deployment of about 4,000 U.S. troops for the campaign against ISIS, said that Wheeler, Cardin and Keating had died in combat.

“In Iraq, in our fight against ISIL, three Americans have given their lives in combat on our behalf,” Obama said, using another acronym for ISIS.

U.S. troops are expected to operate well behind the front lines to avoid being involved in direct combat, but the question of how far behind the lines they stay became muddled last week when three U.S. Special Forces advisers turned up in Agence France Presse photos with the U.S. backed Syrian Democratic Forces — an umbrella group of Kurdish, Arab and Christian fighters — as they advanced towards Raqqa.

Army Col. Steve Warren, a spokesman for Combined Joint Task Force-Operation Inherent Resolve in Baghdad, said in a Pentagon briefing that front lines often become fluid but U.S. troops were expected to stay at least a “terrain feature” away from the enemy.