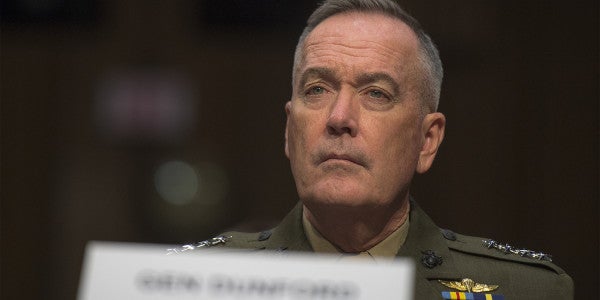 While the White House maintains that U.S. troops supporting the fight against Islamic State militants are not in a combat role, the chairman of the Joint Chiefs of Staff acknowledged Thursday that troops are fighting and dying in combat operations in Iraq and elsewhere in the Middle East.

During a Senate Armed Services Committee hearing with Defense Secretary Ashton Carter about the status of operations against the Islamic State in Iraq and Afghanistan, or ISIS, also known as ISIL, Marine Gen. Joseph Dunford answered a line of questions from Alaska Republican Sen. Dan Sullivan about the March 19 death of Marine Corps Staff Sgt. Louis Cardin due to indirect fire at a small outpost in northern Iraq.

Related: We already have boots on the ground in Iraq »

“Was he killed in combat?” Sullivan, a Marine reserve officer, asked.

“He was killed in combat, Senator,” Dunford responded.

“When our [Joint Special Operations Command] troops conduct missions in that part of the world, are they conducting combat operations?” Sullivan pressed.

Dunford agreed they were, and also assented that Air ForceA-10s and F-16s dropping bombs on Iraq and Syria were also engaged in combat operations.

Why then, Sullivan asked, did the White House refuse to acknowledge that troops were in combat?

“Why does the administration go through these crazy somersaults that the entire country knows is not correct to say our troops are not in combat when they're in combat? The chairman of the Joint Chiefs just stated that pretty much everybody in the Middle East is in combat. So why does the president not level with the American people, why does the White House spokesman continually say they're not in combat,” Sullivan said.

In a Tuesday briefing, White House spokesman Josh Earnest reiterated the administration's stance on the topic.

“[U.S. troops are] not in a combat role, but they are in a role that puts them in harm's way,” he said. “They are armed for combat. They are armed to defend themselves if necessary. But the role that they have is to offer advice and assistance to forces on the ground fighting ISIL in their own country.”

Carter agreed with Dunford that the fallen troops had been killed in combat, but said the language of the White House was intended to emphasize the role of Iraqi forces out front.

The role of the troops deployed in support of counter-ISIL operations was “not to try to substitute for local forces … but to try to get them powerful enough that they can expel ISIL with our support,” Carter said. “And when we provide that support, we put people in harm's way, we ask them to conduct combat actions.”

Sullivan asked that Carter and Dunford pass his request for clearer acknowledgment of American troops in combat to the White House.

“[There are] 250 new Special Forces troops going to the Middle East but they're not in combat roles. Well, that's not actually true,” he said. “I think that leveling with this committee, leveling with the American people is very useful.”

Last weekend, Dunford paid a quiet visit to Fire Base Bell, where Cardin was killed, to award four Purple Heart medals to Marines wounded in the same attack.

“I just talked to them about what they were doing, what their mission was, and frankly just thanked them,” Dunford said, according to a Defense Department news report.