The debate over the integration of women into combat arms roles hit a contentious point earlier this month, as Secretary... 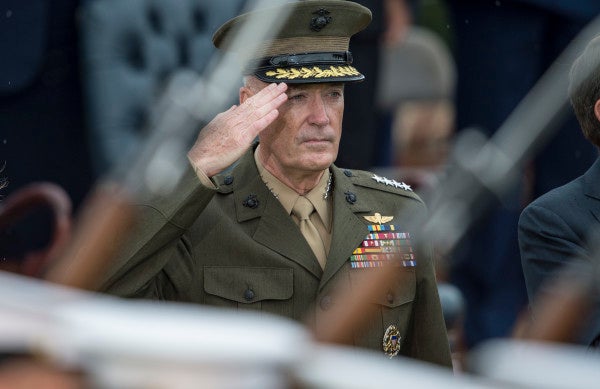 The debate over the integration of women into combat arms roles hit a contentious point earlier this month, as Secretary of the Navy Ray Mabus said his recommendation to the secretary of defense will be to open all roles to women in the Navy and Marine Corps. This came on the heels of a controversial report by the Marine Corps on the results of its Ground Combat Element Integrated Task Force. Marines involved in that task force found that women performed equal or below in most all cases to the lowest 5% of men as a group, according to a since-deleted Facebook post from Marine Sgt. Maj. Justin LeHew, the senior enlisted advisor for the Marines’ Training and Education Command.

Then, reports from the Associated Press stated that the Marine Corps intends to dissent from Mabus and the other branches to appeal for an exception on integrating women into certain roles. The Marine Corps would be the only branch to do so.

This controversy places Marine Gen. Joseph Dunford in a extremely difficult position. As chairman of the Joint Chiefs of Staff, Dunford is the highest-ranking general in the U.S. military. He has been in that role for just three days, having previously been commandant of the Marine Corps. If the Associated Press reports about the Marine Corps breaking from the secretary on the Navy about women in combat roles are true, Dunford put them in motion.

This puts the new chairman of the Joint Chiefs of Staff at odds on this with the secretary of the Navy and the secretary of Defense, Ash Carter, who have both been on record supporting women integration into direct combat-related jobs. The Marine Corps is the only service that has voiced its of opposition to women in direct combat related roles and will reportedly request an exemption. This recommendation, for which Dunford will have laid the groundwork, will have to go through the secretary of the Navy and the secretary of defense. Both the secretaries of the Navy and defense work closely with the chairman of the Joint Chiefs, who serves as the top uniformed advisor to the president. Dunford will be in the difficult political position of advising the president and the Defense Department about women in combat roles, and this challenge has been made tougher by his actions at the end of his tenure as commandant.

In laying the groundwork for this fight, it appears that Dunford is not worried about agreeing with the secretary of the Navy or the secretary of defense on this and he is willing to place his judgement ahead of political pressure. In the tough times that we face militarily in the world, leaders like Dunford are exactly who we need.

Our military and country deserve leaders who will be honest with them and maintain the highest levels of integrity regarding controversial issues like this. It is comforting to know that we have generals who are willing to stay true to their own opinions in the face of pressure.