It might be tempting for some of the military’s top brass to get weighed down by all that bling on... 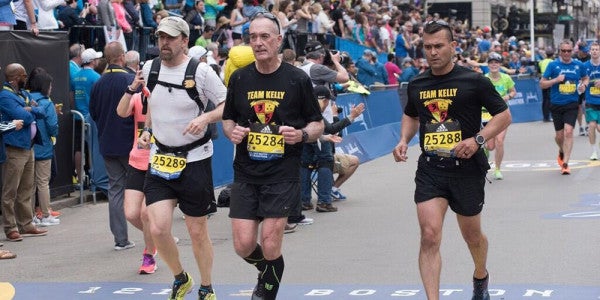 It might be tempting for some of the military’s top brass to get weighed down by all that bling on their collars, or slack off in the comfort of their plush chairs at the Pentagon. But not Marines like the 61-year-old Gen. Joseph Dunford, the chairman of the Joint Chiefs of Staff, who, in addition to maintaining his reputation as a PT stud, could probably kick your ass.

Related: 4 Habits That Will Make You A Better Military Leader »

On April 18, “Fighting Joe” participated in the 26-mile long Boston Marathon, crossing the finish line at just over 4 hours and 50 minutes and proving once again that not only is he still in great shape, but age and rank are no excuse for getting fat and nasty. On April 19, the official Twitter account of the joint chiefs posted this impressive photo of Dunford:

Dunford wore a “Team Kelly” shirt during the marathon to raise awareness for Homeland Security Sec. Robert Kelly's son, Marine 1st Lt. Robert Kelly, who was killed in Sangin, Afghanistan in 2010, according to a joint chiefs spokesman.

This isn’t the first time the Boston native proved that rank isn’t an excuse to duck out of PT. In December 2014, photos surfaced of Dunford, then the Marine Corps commandant, crushing the Corps’ Combat Fitness Test.

“No Marine, I’m not going to drop you… accidentally.”

The article has been updated with new information from a joint chiefs spokesman received after publication. (Updated 4/19/17, 2:57 pm EST).