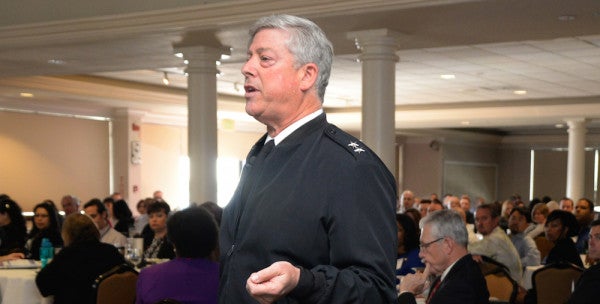 Now-retired Rear Adm. Patrick Lorge has accused U.S. Navy legal corps officials of letting politics and public relations concerns dictate the outcome of a case where a decorated Navy SEAL was charged with sexual assault in 2014, according to the Washington Times.

In an affidavit submitted to an appeals court May 5, Lorge claimed that the judge advocate general of the Navy exerted unlawful command influence by attempting to convince him not to exonerate the sailor because it would tarnish the Navy’s image.

Lorge was the convening authority tasked with reviewing the court martial of Senior Chief Special Warfare Operator Keith Barry, who, in 2014, was convicted sexual assault and rape and sentenced to three years in jail, Navy Times reported.

“I did not find that the Government proved the allegation against Senior Chief Barry beyond a reasonable doubt,” Lorge wrote in the affidavit.

Barry’s lawyers believe Lorge’s affidavit could be enough to appeal his case.Barry previously alleged that the woman who accused him of sexual assault “talked about getting back together after the sexual encounter in a hotel room on the base,” according to Navy Times, and only leveled her charges after speaking with friends. He says that she began accusing him of sexual assault and rape after speaking with friends.

Lorge is now alleging that the Navy’s interest in protecting its image by being proactive in sexual misconduct cases was prioritized over the facts of the case. And the pressures, he says, came from as high as the White House.

“At the time, the political climate regarding sexual assault in the military was such that a decision to disapprove the findings, regardless of merit, would bring hate and discontent on the Navy from the President, as well as senators including Senator Kirstin Gillibrand,” Lorge says in the affidavit. “Absent the pressures described , I would have disapproved the findings in this case,” he adds.

Lorge claims he was made to believe that finding the evidence in Barry’s case insufficient to convict him would lead to “the perception that military leaders were sweeping sexual assaults under the rug,” according to his affidavit

The U.S. Court of Appeals for the Armed Forces will decide whether or not it will select a special master to look into the case, but Barry’s lawyers believe Lorge's affidavit can serve as grounds for dismissing his conviction.