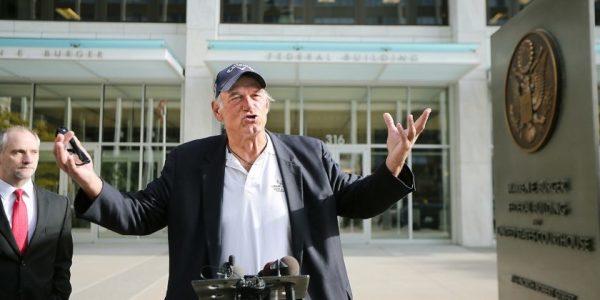 “I’m smiling. Everyone see the smile?” Ventura told a crowd of journalists, before ranting about “fake news,” railing against the court system, and referring to Kyle, the American Sniper author, as an “American liar,” according to a Minneapolis-based CBS affiliate.

Ventura has been embroiled in a legal dispute with the estate of the deceased Navy SEAL veteran over Kyle’s claim in his 2012 best-selling memoir that he and Ventura got into a bar brawl — an event Ventura has repeatedly said never happened, the Associated Press reports.

“I didn’t start this,” Ventura said at the press conference. “He wrote the lie. I didn’t even know who he was prior to this.”

Ventura has long held that Kyle’s claim that he insulted deceased Navy SEALs (which led to the alleged fight) ruined the ex-governor’s reputation in the military and veterans’ community.

“My reputation means more than money,” Ventura said at the conference. “You don’t pay if you’re innocent. You go to court. That's what I did. And if you’re the other side and you do pay, that tells you who was telling the truth, right there.”

Related: Jesse Ventura Sounds Off On Weed, Suing Chris Kyle, And Why He Wouldn’t Enlist Today »

Ventura’s defamation suit continued against Kyle’s estate following the Navy SEAL veteran’s murder on Feb. 2, 2013, at a shooting range in Chalk Mountain, Texas, by Marine veteran Eddie Ray Routh. Kyle was widely regarded as the deadliest sniper in United States military history, but following his death, a number of claims made in his memoir have come under suspicion, with some suggesting that Kyle even misrepresented his military awards.

Ventura was awarded $1.8 million in the case in 2014, but that award was overturned in the U.S. 8th District Court of Appeals on June 13, 2016; a subsequent Supreme Court ruling upheld that decision.

“The jury said I was right, the judge who tried the case agreed,” Ventura said at the conference, according to CBS. “You have two judges who overturned it who never heard a shred of evidence…that’s what’s wrong with our system.”

A second lawsuit was in the works when the the settlement — for an untold sum of money — was recently reached and Ventura agreed to drop his defamation case, CBS reports. Neither Ventura nor his lawyer would say whether the money came from American Sniper publisher HarperCollins or its insurance company, but Ventura said the settlement did not come from Kyle’s widow or his estate, according to the Associated Press.

Ventura also made it clear that he has not received an apology from anyone. When asked by reporters about the terms of the settlement, Ventura responded: “My apology is in the bank.”