‘I Got Him With My Hunting Knife’: SEAL Allegedly Texted Photo Cradling ISIS Fighter’s Head 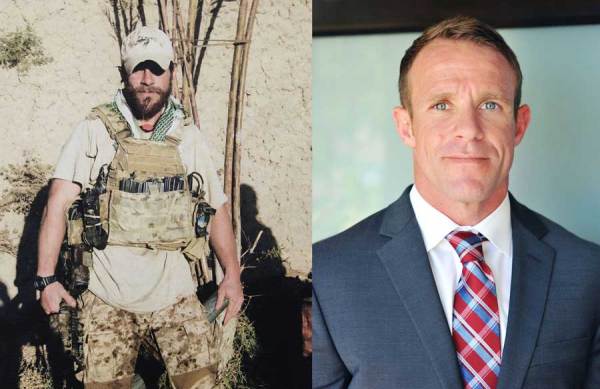 NAVAL BASE SAN DIEGO — Navy SEAL Chief Edward “Eddie” Gallagher allegedly texted a photo of himself cradling a dead ISIS fighter's head in one hand while holding a knife in the other and boasted that he “got him with my hunting knife,” Navy prosecutors said Wednesday.

In an Article 32 hearing before Navy Judge Advocate Capt. Arthur Record, prosecutors introduced a large binder of eyewitness statements, video interviews, photographs, and text messages to establish that Gallagher's case should be referred to court-martial. The preliminary hearing only requires probable cause of a crime for a hearing officer to determine whether to recommend a full trial.

Gallagher, a 19-year veteran of the Navy, has been charged with four counts of violating military law, the most serious of which is premeditated murder. On or about May 3, 2017, according to the charge sheet, Gallagher allegedly murdered a wounded ISIS fighter by stabbing him in the neck and body with a knife.

Warpinski, who has been investigating the case since April, told the hearing officer he had taken sworn testimony from 9 members of Gallagher's unit, SEAL Team 7 Alpha Platoon. According to Warpinski, the platoon was operating in Mosul alongside the Iraqi Emergency Response Division when the alleged murder occurred.

The ISIS fighter being questioned by an Iraqi journalist.Youtube

Gallagher briefly left as other SEALs began to help with medical treatment of the fighter, who was having trouble breathing and was apparently hit with shrapnel in the left leg. But one other SEAL medic, C.S. (witnesses were reduced to initials in the proceedings to shield them from potentially being placed on so-called “ISIS kill lists“), told NCIS he believed he had just stabilized the fighter before Gallagher “walked up without saying anything at all” and started stabbing him.

In total, there were three eyewitnesses to the alleged murder. Others on the team or attached to it commented on other aspects to NCIS, according to Warpinski, who said that EOD Chief M.M. “couldn’t believe what had happened” to the wounded man, adding, “this was just a brainwashed kid.”

It wasn't clear from Warpinski's testimony whether he was quoting from an interview with M.M or offering testimony from other witnesses who relayed to NCIS what they believed M.M. had said. Warpinski did not immediately respond to a request for comment, but an attorney representing four EOD members of the platoon, who would speak only on condition of anonymity, told Task & Purpose: “There were four EOD technicians assigned to Alpha Platoon, none of whom have made any statements, formal or informal, to NCIS regarding this matter.”

An Air Force combat controller with the SEALs found it “inappropriate” and “disrespectful” to take photos with the body and conduct a reenlistment, according to Warpinski. The photos, which were introduced under seal and not shown during the hearing, were discovered in a search of Gallagher's personal cell phone.

In one, the SEAL Chief held up the dead fighter's head, still attached to the body, with one hand while holding his knife in the other. The second showed a similar pose but zoomed out, with two other SEALs in the background. The third showed Gallagher holding the fighter's head by his hair, which Warpinski said was apparently right after the reenlistment ceremony.

During cross-examination, Gallagher's civilian defense attorney Philip Stackhouse seemed to imply that other SEALs had engaged in similar behavior and posed with bodies: “Did you ask whether every person took a picture with that ISIS fighter that day?” he asked (Warpinski said no). Stackhouse also asked why NCIS did not seize the entire SEAL platoon's phones for evidence.

“You took them at their word?” Stackhouse asked of Warpinski's questioning of witnesses, to which he for the most part agreed, adding that “it seemed like all their statements were consistent and true.”

Charges against Gallagher also included two other incidents that took place at separate times, in which the SEAL Chief allegedly shot and wounded two civilians.

The first incident occurred on or about June 18, 2017, when Gallagher, posted in a sniper hide in a tower east of the Tigris river, allegedly shot and wounded an elderly Iraqi civilian walking along a road. The second incident, on or about July 2017, involved the alleged shooting of a young girl from the same location.

After both incidents, Warpinski said, other members of the platoon told investigators that Gallagher's rifle was slightly “off” due to poor sight settings and incorrect range cards — but they decided not to tell him, remarkably, because “they felt that he was targeting civilians.”

“Their priority was to protect civilians from Chief Gallagher, not ISIS,” Warpinski said, adding that other SEAL snipers would sometimes fire warning shots to keep civilians off the streets.

The claim that Gallagher, a trained sniper, wouldn't know whether his weapon was on target, was seized upon by Stackhouse, who asserted he was the “most experienced sniper in the platoon.”

Gallagher began his Navy career as a corpsman attached to the Marines, and later became the first non-Marine to graduate from the Corps' Scout/Sniper school shortly after Sep. 11, according to a career biography provided by Stackhouse to Task & Purpose, which said he deployed for nine months to Iraq and Africa in 2003 as a corpsman and sniper with a Marine infantry unit.

The bio also noted that Gallagher, who became a SEAL in 2005, served as a lead sniper, lead platoon medic, and lead petty officer, among other leadership roles with the teams. He earned the Sailor of the Year distinction from the Navy in 2014, and had been awarded two Bronze Star awards for combat valor; the first for bravery in Afghanistan when he was with SEAL Team 1, the other for actions during his last deployment with SEAL Team 7 to Iraq.

Despite his impressive resume, witnesses claimed Gallagher was a poor sniper, medic, and tactician, Stackhouse said. “You see the inconsistency, correct?”

Warpinski, however, said there was none. “Every single sniper we talked to spoke to his issues as a sniper.”

Prosecutors largely focused on text messages sent by Gallagher to friends in which he seemed to boast about the killing, or later, tried to enlist help in keeping it under wraps.

For example, prosecutors introduced text messages from Gallagher to Chief Warrant Officer 2 B.G., in which he said, “I got him with my hunting knife” with the photo of him with the dead ISIS fighter. B.G. replied, “be careful with pictures.” And another text message from Gallagher to another active-duty SEAL, according to Warpinski, referenced “getting his knife skills on.”

Meanwhile, the charge sheet also alleges Gallagher obstructed justice by attempting to discourage members of the platoon from reporting his actions to leadership during and after deployment. SEAL Petty Officer C.M., for instance, claimed to investigators that Gallagher told them, “I have shit on all of you. If you bring this up you all go down.”

Other text messages exchanged between Gallagher and former SEAL Andrew Arrabito seemed to indicate an attempt to name and shame witnesses in public. Soon after the search warrant was executed on Gallagher's residence — which contained the initials of the witnesses — Gallagher texted Arrabito to say he knew who the witnesses were and wanted their names put out on social media, to include getting the word out to a private Facebook group for current and former SEALs that they were informing on “multiple SEALs,” prosecutors said.

Arrabito did not immediately respond to a request for comment from Task & Purpose.

Stackhouse, for his part, attempted to pick apart some government evidence and offer a different theory: Gallagher, who one witness described as a “hardass,” had called some members of the platoon “pussies” and “cowards” for not being aggressive enough on the battlefield, and the murder and assault allegations were payback and an attempt to get him out of special operations.

The death of the fighter, according to Stackhouse, likely came from his already present injuries from the air strike and the SEAL medics' insertion of a “cric” (pronounced crike), or cricothyrotomy, into the fighter's neck, which was meant to help open an airway.

“He didn't stab the dude in the neck,” Stackhouse told Task & Purpose during a recess. And when asked whether there was more evidence of the wounding of the two Iraqi civilians, such as media reports, he said, “there's nothing.”

“That’s not who Eddie is,” Senior Chief Robert Ekoniac (Ret.), a friend of Gallagher’s who came to the hearing with about 10 to 15 other supporters, told Task & Purpose.

The Article 32 hearing continues on Thursday.

This article was updated on Nov. 16 with further statement from an attorney representing EOD technicians attached to Alpha Platoon.