The Naval Special Warfare insignia, or SEAL Trident, is supposed to be a shining embodiment of the community’s ethos: honor, … Continued 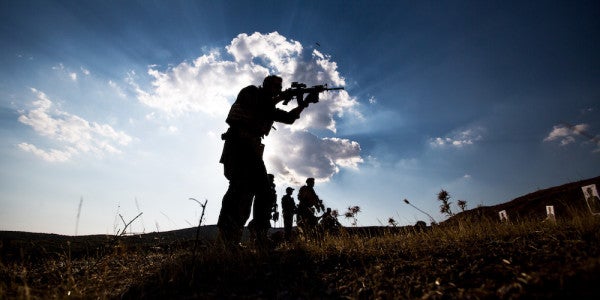 The Naval Special Warfare insignia, or SEAL Trident, is supposed to be a shining embodiment of the community’s ethos: honor, heritage, and above all, service to the country and each other. But a new investigation from CBS News portrays the forces as rotting from the inside.

Speaking anonymously to CBS News in a report released April 11, three Navy SEALs — one active-duty and two retired — described a growing culture of substance abuse within the elite unit, from marijuana to cocaine, ecstasy and, in some cases, prescription drugs.

But a spokesman for the Naval Special Warfare Command says the data CBS News used to paint a picture of widespread drug use came from an impromptu briefing by one chief of staff of a single Virginia-based SEAL sub-command in a December all-hands meeting — a meeting that NSWC claims the network presented out of context and without comparison to drug-test data gathered by the Navy over the last several years.

That officer’s presentation “cited 135 incidents in the last two years, but that data is totally unqualified,” NSWC spokesman Capt. Jason Salata told Task & Purpose in a phone interview. “We don’t know where he got it from, and he was speaking to a group of people who worked for him.

“Our official data is adjudicated by lawyers, Salata said. “If you ask anyone else in the Navy for drug data, that’s what you’ll get.”

Navy data provided to Task & Purpose by Salata shows that of the 6,364 Special Warfare personnel tested during a no-notice urinalysis screening conducted the week after Thanksgiving 2016, only seven tested positive for illicit substances (the screening found that 10 samples were positive for one or more drugs, but a review determined that three of these positive samples warranted drug-abuse waivers). Those seven personnel were disciplined by their commanding officer.

The data indicates that while positive tests in the Navy as a whole are rising, the annual incidence of illicit drug use among Navy SEALs is significantly lower than in the rest of the fleet, according to the data.

The NSWC response to CBS News focuses on video of an all-hands meeting held December 2016 by Capt. Milton “Jamie” Sands, commander of Naval Special Warfare Group Two in Virginia Beach, featured in the CBS investigation. In the meeting, the unit’s chief of staff berated his subordinates for the “staggering” drug abuse figures gathered in the post-Thanksgiving no-notice sweep — numbers the NSWC now claims are not reflective of official data.

Instead, Salata argued the chief of staff inflated the numbers to make a point, comparing the dynamic to a good-cop-bad-cop routine: The commanding officer’s second-in-command rattles the enlisted SEALs before Sands walks out to lay down the law in a silent-but-disappointed monolog.

“He wasn’t making an official statement,” said Salata of the chief of staff. “He was speaking to a group of people who working for him. He was just trying to make a point. Jamie Sands is the commander of that group.”

The unnamed chief of staff in question did not respond to multiple requests for comment.

In a statement, Naval Special Warfare Commander Admiral Timothy Szymanski condemned the use of drugs by the SEAL community. “Drug use is incompatible with NSW values,” he said. “It endangers the health and safety of the abuser and his teammates and harms the effectiveness of the Naval Special Warfare team. Our policy on drug abuse is zero tolerance — plain and simple. Anything above zero represents a disturbing trend for this elite force.”

When reached for comment by Task & Purpose, Navy public affairs officials appeared to close ranks, referring questions back to Salata. Representatives for Naval Special Warfare Group Two and the Navy’s chief of information declined to comment on the chief of staff or the or the provenance of the data cited in the all-hands meeting (Salata claims the officer is on leave for unrelated reasons). The Office of the Secretary of Defense did not respond to requests for comment entirely.

However, one NSW personnel who spoke under the condition of anonymity characterized the December all-hands meeting as standard.

“It's typical for an XO to lay out the tone for any sort of safety conversation before hearing from a commanding officer,” the officer said. “I’ve been to plenty of drug-related all-hands calls before. It wasn’t out of the ordinary.

Salata also tried to throw cold water on complaints of “corruption” and profiteering among the SEAL community, which CBS reported in an April 12 follow-up investigation. Disclosing the inner workings of SEAL missions can certainly jeopardize operational security, and NSW maintains a tight grip on how that information becomes available to the public (several Navy SEALs were disciplined for working on a version of “Medal of Honor” in 2012, CBS News notes).

But sharing minor details — like fitness tips that have become a “cottage industry,” as CBS News put it — are more violations of the SEAL credo of not “seek recognition” for their service than statutory infractions punishable by judicial and nonjudicial proceedings.

“As a ‘quiet professional,’ SEALs don’t ride the brand out into the public, whether it's dumping sensitive information to the press or using your Trident to sell something,” said Salata. “But that really depends on the individual and their moral compass. I think it would be safe to say that SEALs see these violations to their ethos poorly.”

Though Salata disputed the portrait of an “enemy within” painted by the CBS News investigation, he does expect NSW leadership to close ranks to ensure the public standing of the SEAL community. When asked about the next round of urinalysis tests to sweep for illicit drug use, Salata conceded that he was getting tested that day.

“I can’t leave work until I provide a sample,” Salata said during a phone conversation on Tuesday. “They took my ID card and gave me a pad to write down all the prescription drugs I’m taking.”