Richard “Mack” Machowicz described himself as a “difficult, intense personality.” That’s why the former Navy SEAL wound up becoming a... 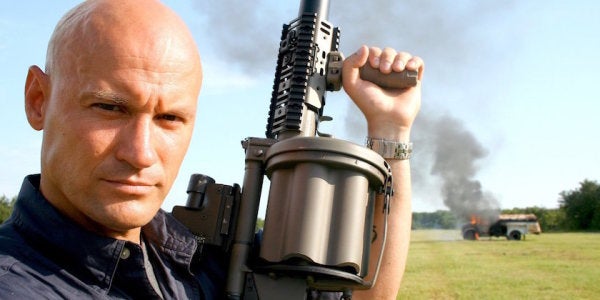 Richard “Mack” Machowicz described himself as a “difficult, intense personality.” That’s why the former Navy SEAL wound up becoming a Zen Buddhist. The goal, he said, was to learn to “access a part of myself, to care about , that I never was able to before.”

Machowicz, the host of Discovery Channel’s “Future Weapons,” died January 2, 2017, of stage IV glioblastoma, according to his friend and SEAL teammate Craig Sawyer, who first shared news of Machowicz’s illness in an Oct. 5, 2015, Facebook post. According to his Discovery Channel biography, Machowicz spent ten years in the Navy, and was Leading Petty Officer of Land, Mountain and Arctic Warfare with the SEAL training cadre.

But Machowicz, who was born in 1965, was best known as a television host, a job he clearly loved.

The former scout/sniper hosted multiple reality-television series, including Spike TV’s “Deadliest Warrior,” which led to his becoming a playable character in the video game “Deadliest Warrior: Legends.” He hosted and appeared in programs on the Military Channel, the History Channel, and Bravo.

On the Discovery Channel’s “Future Weapons,” Machowicz got to play with some of the newest cutting-edge weapons systems. On the episode “Top Guns” he grinned as he got to test the then-new Barrett M468 carbine, which fired a larger caliber round than the standard M4. He followed that up with a look at the M777 howitzer, and then took a ride in an F/A-18 Super Hornet off the USS Eisenhower (CVN-68).

In 2000, Machowicz wrote the self help book, “Unleash the Warrior Within,” in which he offered lessons for applying the principles of combat to everyday challenges. More recently, Machowicz founded “Not Dead Can’t Quit!” a networking and self-help website inspired by his book.

His personal life seems to have stood in contrast to the television version of himself. Machowicz had a tattoo on his right arm, a Buddhist expression, “Always in heart, always in mind.” Even as he explored the culture and techniques of military might and warrior accomplishments, he underwent five years’ training as a Buddhist priest, seeking to apply the toughness and intensity of his military training to his inner life.

“What I want to do is actually be a loving, responsible, caring human being,” he said in a Discovery Channel video.

“I wrote on my arm so that … I would eventually look at it and remind myself to get my act together.”

Machowicz is survived by his wife Mandy and two daughters.