General: The Marines, Victims Of Their Own Success, Are Stretched Too Thin 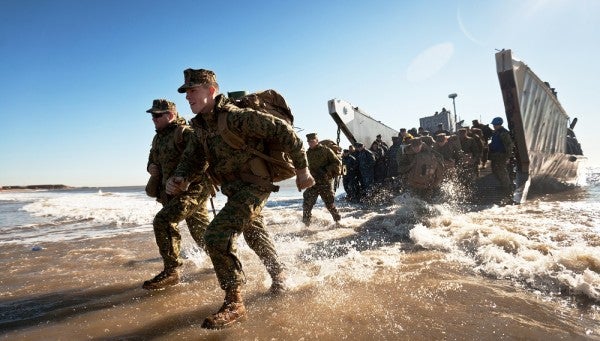 It sounds like a typical Marine boast… but it could also be a big problem. Currently, the Camp Lejeune, North Carolina-based MEF, a 42,000-strong force of ground combat troops, supporting elements, and air assets, is stretched across every combatant command around the globe, with 7,000 Marines and sailors currently deployed in support of operations abroad, according to a slide Hedelund shared with his audience.

“If there's a bullet flying anywhere on the planet, Marines want to be there,” Hedelund said. “However, if something big breaks, there ain't a lot in the barn.”

Hedelund was speaking ahead of a “Current Operations” panel discussion — and true to his point, one of the slated panelists, Col. Ryan Rideout, the commanding officer of the 24th Marine Expeditionary Unit, was unable to attend because he was deployed.

After returning from a seven-month tour that spanned Europe and the Middle East — and included peeling off an artillery battery to support combat operations against the Islamic State in Syria — the 24th MEU was retasked Oct. 11 to support hurricane relief operations in Puerto Rico in the wake of Hurricane Maria.

“Those ships at sea were not scheduled to be at sea,” Hedelund said. “They're tired, no doubt about that, but they're a ready force, and we can send them off to do the nation's work, should it be needed.”

The dizzying operational pace could have far-reaching consequences for the Navy and Marine Corps team’s readiness.

“I know we acknowledge that even though Marines may be ready to deploy, that ship is going to have to be ready to deploy, and we're not going to take any time away from them to make sure they're comfortable where they are,” Hedelund said. “The Navy has gone way over the top on ensuring they can support that mission. But we're going to pay that price; we're going to pay that bill in availability in the months to come.”

II MEF and its MEUs’ relief efforts, partner training exercises, and “boutique operations” — Hedelund’s description of the 24-hour, all-weather fire missions conducted by MEU-based artillery batteries in Syria — come at a cost for a military organization originally designed for mass maneuver and firepower. As combat ramped down in Iraq and Afghanistan, “warfighting at the MEF level was put on the back burner,” Hedelund said.

Part of the problem according to Hedelund is that the service, in its hurry to rush where there’s a “bullet flying,” may be “over-invested in relevance” but “under-invested in readiness.”

At the conference, Hedelund warned that should II MEF be called to ship out for a “MEF-level” fight — similar to what I and II MEF did during the 2003 invasion of Iraq, when they formed the 2nd Marine Expeditionary Brigade, designated Task Force Tarawa — the Marines may be hard-pressed to meet those demands, given II MEFs numerous ongoing missions.

“You begin to find out where your readiness is, and possibly is not, when you do short-notice, relatively ad-hoc deployments,” he said. “We want to be relevant, but we have to invest in readiness.”