With deployments of Marines and soldiers to the battlefields of Iraq and Syria on the rise, there’s one weapon system... 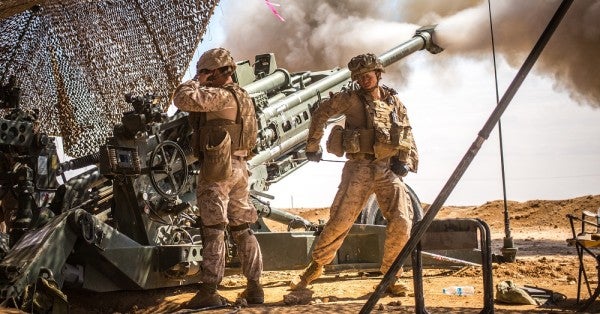 With deployments of Marines and soldiers to the battlefields of Iraq and Syria on the rise, there’s one weapon system that’s been putting in a lot of work in the campaign against ISIS. And no, it’s not the F-35: We’re talking about the M777 Howitzer and its gun crews, who for the past year have been shelling the ever-loving shit out of ISIS militants.

Positioned forward of large military bases, arty Marines and soldiers have been at the gun pits day and night lobbing rounds in support of Operation Inherent Resolve, and it’s high time they, and their big ass guns, got some love.

At Fire Base Bell in Iraq, Marines with the 26th Marine Expeditionary Unit fired roughly 2,000 rounds in support of Iraqi and Kurdish fighters engaging ISIS militants in Mosul in May 2016, and soldiers with the Army’s 1st Battalion, 320th Field Artillery Regiment continued the mission after the MEU rotated home.

In Syria, Marines with the 11th MEU recently dropped 4,500 rounds on ISIS militants in support the local Syrian and Kurdish fighters on the march to take Raqqa, the Islamic State’s de facto capital, and now another artillery battery from a different MEU has taken over that mission.

Related: 7 Badass Photos Of Marines Shelling The Crap Out Of ISIS In Syria »

Run by a crew of seven or eight — and five if need be — the 155 mm BAE Systems-designed cannon boasts some impressive specs. With a range of 15 miles, the M777’z deadly reach can be enhanced with rocket-assisted shells, allowing it to reach out and destroy a target up to 18.6 miles away, according to Popular Mechanics.

The M777 replaced the M198 howitzer when it entered service with the Marines and Army in 2005 but unlike its 15,700-pound predecessor, the M777 weights just 9,800 pounds, meaning troops can literally truck the cannon onto the battlefield or airlift this beast with CH-53 Super Stallions, CH-47 Chinooks, or MV-22 Ospreys. For a real sense of just how light this thing is, one of the gun’s World War II-era ancestors, the 240mm M1 howitzer, weighed in at 64,700 pounds, and another WWII-era big gun, the 155mm M114 Howitzer came in at roughly 13,000 pounds and had shorter range.

Compared to the M198, which takes 10 minutes to set up, the M777 is ready to rock in just three minutes, according to Popular Mechanics. After that, the cannon can start lobbing rounds at a sustained rate of two per minute — or five a minute for two minutes on those rare situations where everything in the target area must be absolutely, positively, destroyed overnight.

To ensure that the M777 continues to give ground forces the fire support they need, the U.S. Army’s Picatinny Arsenal is developing the M777 ER (extended range) to strike targets more than 40 miles out. The upgrades will increase the barrel length, include an autoloader, a new fire control system, and will fire a safer, more precise, and therefore, deadlier round.

That being said, it seems to be doing a pretty good job as is.