The US military needs a lot more artillery shells, rockets, and missiles for the next war

It’s time for the military to stock up on things that go boom. 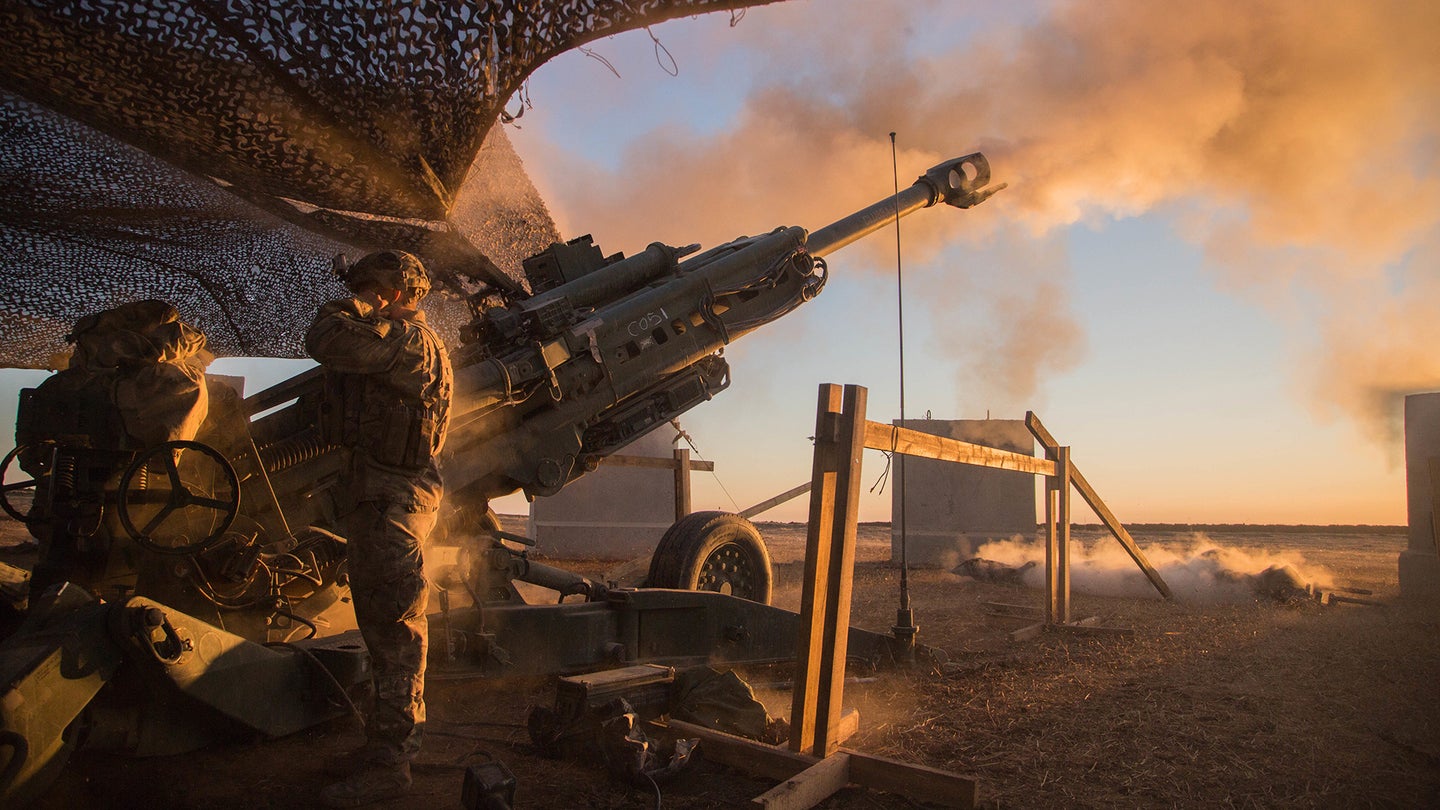 The U.S. military needs to start buying munitions by the proverbial crapload if they want to be prepared for a war with Russia or China.

Back in February 2018, the Army asked Congress for money to buy about 150,000 shells for 155mm howitzers. That represented an 825% increase in the number of shells that the Army wanted to buy.

Events since then have shown that 150,000 shells will not get you far on a modern battlefield. Since February, the United States has provided Ukraine with up to 806,000 shells for 155mm howitzers and another 108,000 shells for 105mm guns, according to the Defense Department. That’s close to 1 million shells in roughly six months, and that figure does not include the precision-guided rockets for the 16 M142 High Mobility Artillery Rocket Systems, or HIMARS, that the U.S. military has also given to Ukraine.

As of June, Ukrainian forces were firing up to 6,000 shells a day, prompting the Defense Department to provide the Ukrainians with the HIMARS as well as more precise 155mm rounds in an attempt to slow the rate at which the Ukraine was burning through its ammunition.

But as the saying goes: Quantity has a quality of its own. And the use of artillery in warfare has always involved huge expenditures of ammunition, said retired Marine Col. Mark Cancian, with the Center for International Studies think tank in Washington, D.C.

The U.S. Army fired about 580,000 artillery rounds in support of the two-month incursion into Cambodia in 1970, and the British fired roughly 1.7 million artillery rounds in the three weeks leading up to their ill-fated Battle of the Somme in 1916, Cancian told Task & Purpose.

“Artillery expenditures increase substantially when front lines stabilize as has happened in Ukraine,” Cancian told Task & Purpose. “When there’s a lot of battlefield movement, artillery expenditures ease off because batteries on the move can’t fire and transportation of ammunition becomes harder. The stabilized front lines and consequent large increases in artillery firing often lead to a ‘shell shortage.’”

Cancian’s son Matthew, a contractor with the Naval War College, also noted that history has shown that no matter how many artillery shells an army has, it will always need more. Army Gen. James Van Fleet increased the daily allowance for U.S. howitzers tenfold when he led the Eighth Army during the Korean War.

As a result, American forces were firing up to 14,000 rounds per day, while the Chinese would fire an average of 3,400 artillery rounds on a given day, said Matthew Cancian, a former Marine Corps captain.

“Yes, Van Fleet’s decision to outfire the Chinese 3-1 led to an ammunition shortage, but it also crushed the fifth phase offensive by the ChiComs [Chinese communists],” Matthew Cancian told Task & Purpose. “The example of Van Fleet is that you will want to fire way more munitions than you had planned for; if you can, this large volume will generate operational benefits; but even then you’ll wish you had more to fire. You will never have enough ammunition.”

One problem facing the United States now is that much of its industrial capacity to produce artillery shells went away after the end of the Cold War more than 30 years ago, and 155mm shells have a life expectancy of 20 years, he said.

The Wall Street Journal has also revealed that defense officials are concerned that the U.S. military’s stockpile of 155mm shells has become “uncomfortably low” as a result of all the artillery rounds that the United States has given to Ukraine.

Pentagon spokeswoman Jessica Maxwell declined to say how many shells and rockets the U.S. military currently has in its inventory. In light of the ongoing military assistance to Ukraine, Congress has appropriated $600 million to accelerate the production of munitions, she said.

Air Force Brig. Gen. Patrick Ryder, the Pentagon’s top spokesman, told reporters on Aug. 31 that he was “not aware of any specific shortages” of U.S. military weapons or equipment caused by the military aid that has been sent to Ukraine.

So far, the Marine Corps’ training status and operational readiness have not been affected by the current inventory of munitions, a Marine Corps spokesperson told Task & Purpose.

​​“Even before the Ukraine conflict started, the Army included hundreds of millions of dollars in the FY23-FY27 budget plan presented to Congress to upgrade Army ammunition plants to increase production capacity and safety,” Elder told Task & Purpose. “Since the war began, the Army has actively worked with Congress to secure more than a billion dollars in Ukraine supplemental funding to restock our ammunition supplies over time, and where possible, replace with more capable and advanced munitions. We are also making investments in ammunition production industrial capacity, including tripling our production rate for critical munitions. The Army has already put those efforts in motion.”

For hundreds of years, the Russian military has revered artillery as “The God of War.” During World War II, artillery units grew from regiments to corps-sized units, including thousands of guns, said retired Army Col. David Glantz, a military historian and an expert on the Red Army during World War II.

From the Battle of Kursk in July 1943 through the end of the war, Soviet artillery played a major role smashing through German defenses, Glantz told Task & Purpose. Every major operation would begin with an artillery barrage, which was essentially an offensive within an offensive, Glatnz said.

Russia’s invasion of Ukraine has become a contest between both sides’ tube and rocket artillery. The U.S. military believes the Russians have burned through a significant chunk of their precision-guided weapons, Undersecretary of Defense for Policy Colin Kahl told reporters on Aug. 8. That may explain why Russia may now be firing its S-300 surface-to-air missiles at land targets in Ukraine.

The Ukrainians have also shown that they can beat the Russians at their own game when it comes to using artillery to strike high value targets and stop movement on the battlefield. But given how many artillery shells and rockets the United States has provided Ukraine, the question arises as to whether the U.S. military has enough munitions to send Taiwan if a conflict with China breaks out in the near future, said Dean Cheng, a China expert with the conservative Heritage Foundation think tank in Washington, D.C.

“I would assume that the HIMARS, for example, might have submunitions onboard, which would really screw up landing craft,” Cheng told Task & Purpose. “One-five-five is a 6-inch shell. Modern warships aren’t armored, so you’d have some pretty good range there if you were to fire a barrage at a ship. If the Taiwanese are trained for it, they might also have laser-guided artillery projectiles for the 155s. Anything that is anti-tank could be used against landing craft.”

However, if China attempted to invade Taiwan, the U.S. military’s main goal would be to destroy as many Chinese invasion ships far from shore, and that would require a lot of long-range weapons, such as Harpoons and Naval Strike Missiles, said Stacie Pettyjohn, director of the defense program at the Center for a New American Studies think tank in Washington, D.C.

“Because the Chinese Navy has a growing fleet of cruisers and destroyers with advanced air defenses that would defend the amphibious forces, the number of weapons likely required is quite large,” Pettyjohn told Task & Purpose. “Air defenses, clutter (commercial shipping or ships that are not the main target), plus just usual failures and misses mean that the U.S. needs a lot of anti-ship weapons to penetrate the air defenses and hit the main target.”

The Air Force is currently planning to buy 190 Long Range Anti-Ship Missiles by 2027 and the Navy also plans to purchase 450 of the missiles, which it would likely have to share with the Navy, Pettyjohn said. But CNAS has found that those numbers of weapons would be “grossly inadequate” in a war against China, she said.

“Our analysis found that the Pentagon as a whole is over invested in long-range ground attack weapons with unitary warheads and does not have enough anti-ship or area-effects weapons for a maritime fight or to use against mobile ground forces, respectively,” Pettyjohn said.

As the Pentagon continues to invest in high-tech aircraft, ships, and other weapons systems, a future war against Russia or China might be decided by which side has the most ammunition. As Gen. James Van Fleet has demonstrated, you can never have enough ammo.