The Army Thinks It Can Eventually Fire Artillery At Enemies 1,000 Miles Away

The Army seems confident it will one day have the ability to fire artillery out to a range of 1,000... 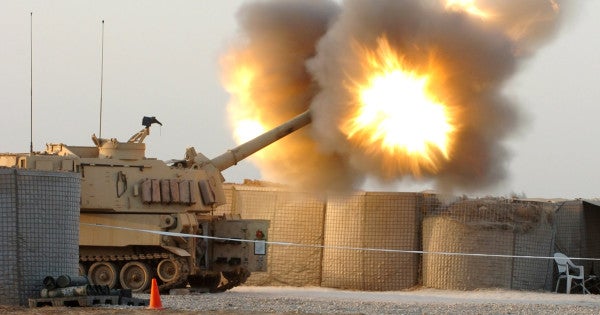 The Army seems confident it will one day have the ability to fire artillery out to a range of 1,000 miles — roughly five times the range it has now.

Whether it can get there remains an open question, though it seems advances from Russia and China in long-range fires has the top brass spooked.

“I think if you looked at the Russian army now and started counting artillery pieces they probable still have a slight advantage in terms of quantities,” Gen. John Murray, the commander of Army Futures Command, told Defense One.

“Quality, I would still argue, we’ve got the edge, but the range thing — they had developed some capabilities that really out-ranged our tactical cannon artillery.”

To correct the problem, the Army has focused on building a Strategic Long-Range Cannon, which will be much bigger than a normal howitzer while apparently still being assisted by rocket-boosted artillery shells the Army currently uses.

“I don’t want to oversimplify, it’s a bigger one of those,” Col. John Rafferty told Breaking Defense. “We’re scaling up things that we’re already doing … It’s never been done before before, we haven’t been pushed.”

The Navy's Tomahawk Land Attack Missiles can effectively hit between 800 and 1,000 miles. But that doesn't help if you're in a country far from shore, where the Army currently has to rely on the Air Force to strike targets at greater distances.

The service is tight-lipped about exactly how its SLRC (pronounced Slorc) will work, though Breaking Defense's Sydney Freedberg speculated that it would be similar to the 155mm rocket-assisted projectile, which gets a boost in range after being fired through a standard artillery barrel.

That still doesn't mean the project is actually feasible, however. As Foxtrot Alpha pointed out in September when Murray first testified to Congress about the cannon, its range seems more in line with “fantasy-land capability.”

Whatever it turns out to be, or rather if it happens, the SLRC will likely be enormous, costly, and take many years to get on a battlefield. But on the flip side, a cannon with its capabilities stationed in a place like Poland — which has been pushing for a permanent U.S. troop presence — will certainly keep Moscow on its toes.