The Army is officially adding missile-hauling Strykers to its arsenal

After years in the making, the Army is officially ordering a new batch of missile-hauling Stryker infantry combat vehicles to deploy to Europe in the coming years 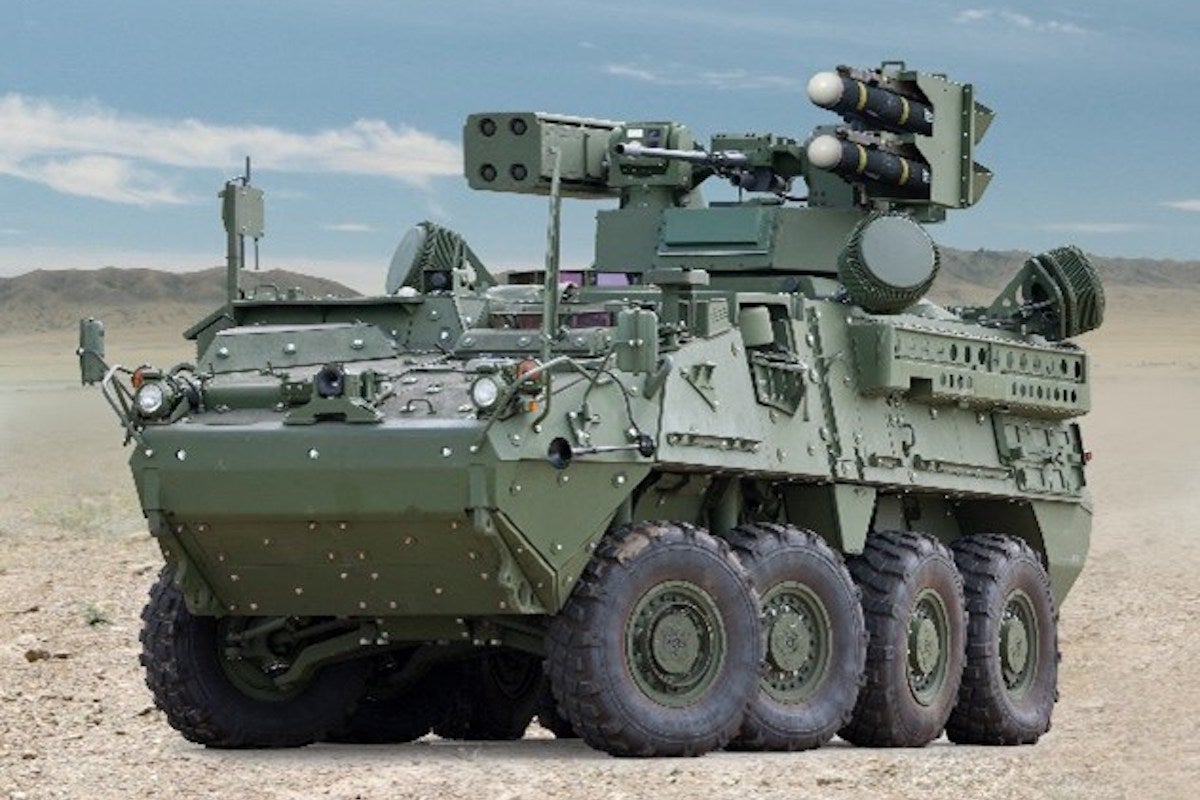 After years in the making, the Army is officially ordering a new batch of missile-hauling Stryker infantry combat vehicles to deploy to Europe.

The initial order calls for 28 Stryker IM-SHORAD Strykers worth roughly $230 million. The Army plans on eventually spreading 144 systems across four battalions by as soon as fiscal year 2023, Army Futures Command officials announced in May.

“General Dynamics and our teammates Leonardo DRS and Raytheon are pleased to be able to partner with the Army to bring this powerful capability to U.S. Soldiers,” GDLS vice president and general manager Don Kotchman said in a statement.

The IM-SHORAD system represents a major boost in firepower for Stryker vehicles, consisting primarily of a 360-degree Avenger air defense turret loaded up with Stinger and AGM-114 Longbow Hellfire missiles (the latter of which are traditionally used in air-to-surface roles), an XM914 30mm cannon, and a 7.62mm machine gun.

The Army envisions employing all of this firepower to counter not just unmanned aerial systems that U.S. troops have been contending with on the battlefields of the Middle East, but both fixed-wing and rotary-wing aircraft deployed by a more conventional adversary like Russia or China.

Indeed, an IM-SHORAD solution has been in the works since Russia annexed Crimea in 2014 and necessitated a resurgence in Cold War-style tactics in Europe, while upgrading short-range air and missile defense has remained a major modernization priority for the Army as it pivots to assessing large-scale conflicts against near-peer adversaries.

“Adaptive threats have developed a suite of airborne threat capabilities, supported by an integrated mix of surface-to-air and surface-to-surface shooters that threaten the ability of maneuver forces to conduct operations.”

The Army is also working on a short-range air defense solution based on Stryker-mounted 50 kw directed-energy weapons, a ten-fold power increase over the 5 kw-class system that artillery soldiers have been testing in Germany since early 2018.

While the Army was originally allotted $233 million in the fiscal year 2020 defense budget for just 32 vehicles — more than awarded in Friday’s GDLS contract — the service’s budget documents contain a total allotment of $575 million for 72 IM-SHORAD vehicles, 22 of which would be procured under the Defense Department’s Overseas Contingency Operations budget.

According to the budget documents, the service also plans on spending an additional $1.575 billion through 2025 on acquiring a total of 180 IM-SHORAD Stryker vehicles.

It’s still unclear if the Army plans on naming the vehicle after a fictional tank from Warhammer 40,000.