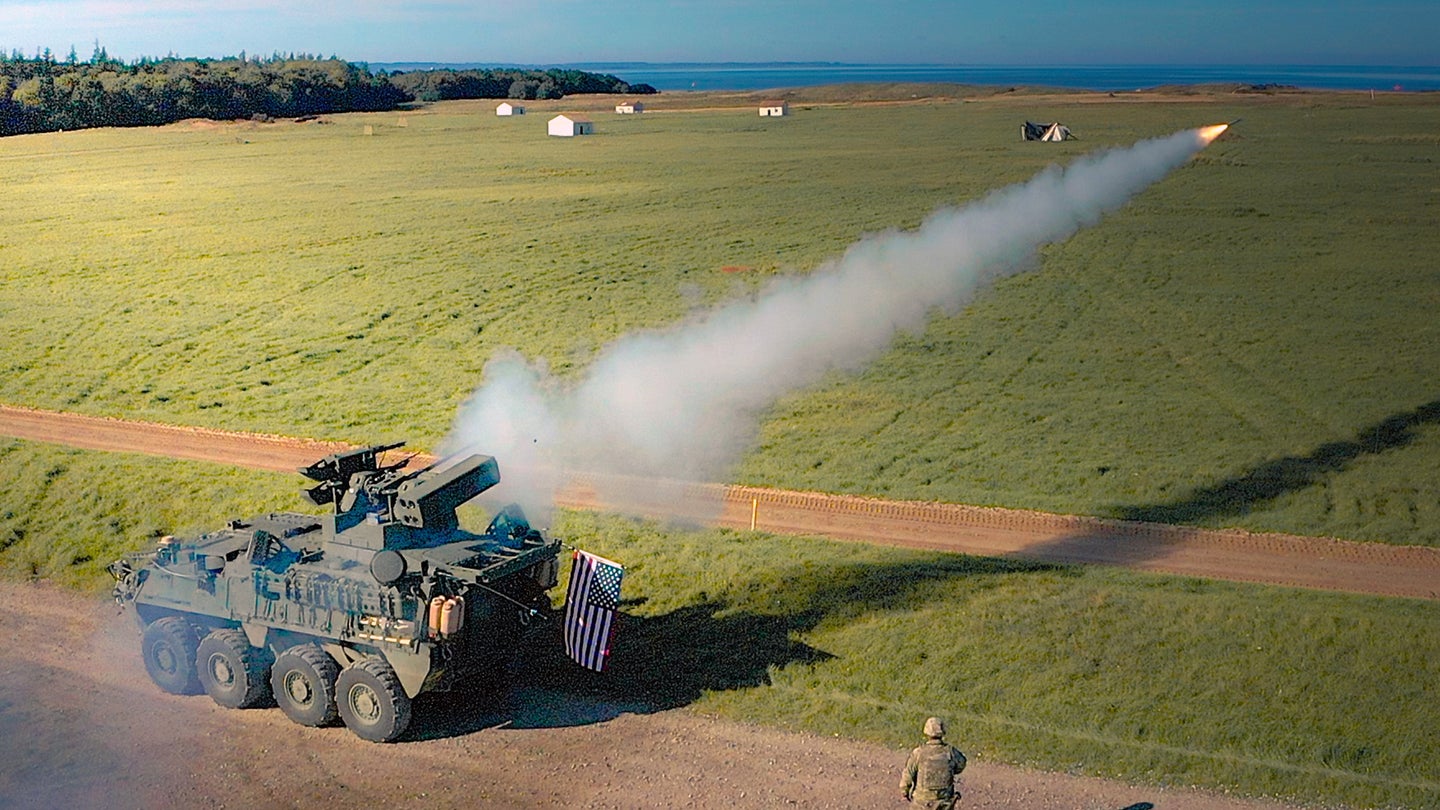 A Stinger missile launches from the new Maneuver Short Range Air Defense system on Oct. 7, 2021. 5-4 ADAR became the first Army unit to live-fire M-SHORAD at the tactical unit level and the first-ever to live-fire the system in Europe. The week-long training took place at a Bundeswehr range on the Baltic Sea coast of Germany. (U.S. Army photo by Maj. Robert Fellingham).
SHARE

The Army’s new missile-hauling Stryker was fired for the first time ever in Europe by soldiers assigned to the 5th Battalion, 4th Air Defense Artillery Regiment.

“The Stinger was amazing!” said Spc. Lily Allen, an M-SHORAD gunner. “I think the Stryker platform overall is one of the best things we could have added to [air defense artillery]. The maneuverability, the capabilities, everything about it definitely gives our branch an upper hand.”

First fielded in November 2020, the M-SHORAD system repurposes the eight-wheeled Stryker infantry transport into a mobile drone and helicopter killer that can quickly move around the battlefield in support of ground troops. Sensors help detect and track low-flying aircraft before gunners inside the 360-degree Avenger air defense turret can fire Stinger or Hellfire missiles, the XM914 30mm cannon, or a 7.62mm machine gun.

“The demonstration went perfect. I am so proud of my soldiers,” said 1st Lt. Kelsey Krauss, the Army’s first M-SHORAD Stryker platoon leader. “They were confident, knowledgeable, they asked questions when they needed to; they really knew their job and they came out here and they killed it.”

The 5-4 ADA has gotten most of the trigger time on the system since the Army announced a $1.2 billion contract award in October 2020 to General Dynamics Land Systems to produce, test, and deliver nearly 30 Strykers outfitted with M-SHORAD. The service plans to get 144 of the systems to four ADA battalions by 2023.

Some soldiers in the 3rd Platoon had already gotten a chance to see how the system works during testing at White Sands Missile Range in New Mexico in November 2020. And they noticed the modern system came with its own radar, better weapons, and could be set up and operational much faster than the Humvee-based Avenger system.

“There’s a lot of equipment on this machine that will change a lot of aspects for the Air Defense Artillery,” Spc. Andy Mendoza, an air and missile defense crew member with the 5-4 ADA, said at the time. “Everything from operations to capabilities to new weapons we as ADA don’t have currently, and I think it will make a huge difference to what we do.”

In recent years, the Army has been modernizing its air defense assets to counter “near-peer” adversaries such as Russia, so it’s no surprise that the Ansbach, Germany-based 5-4 ADA has taken lead on fielding the M-SHORAD. Indeed, the service press release noted that the “next big exercise” for the weapon will be during Saber Strike 22, an annual exercise involving troops from the U.S., Latvia, Estonia, Lithuania, and Poland.

“We are looking for a rapid solution for the near-term fight,” Maj. Gen. John Ferarri, then the Army’s head of program analysis and evaluation, told Warrior Maven in 2018. “We atrophied air defense if you think about it. With more near-peer major combat operations threats on the horizon, the need for SHORAD and high-tier weapons like THAAD [Terminal High-Altitude Area Defense] and PATRIOT [surface-to-air missile system] comes back to the forefront.”