Did An Army Stryker Run Down A Child In Lithuania? That’s Fake News, Officials Say

A NATO ally dismissed as fake news claims that a U.S. Army Stryker armored vehicle accidentally ran down and killed... 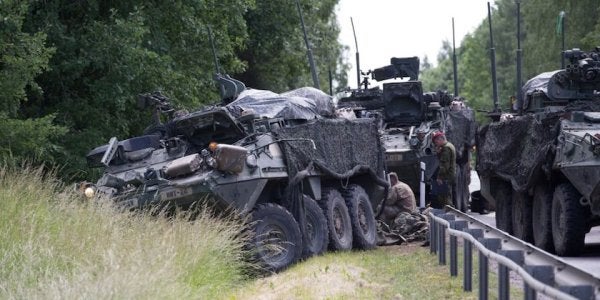 A NATO ally dismissed as fake news claims that a U.S. Army Stryker armored vehicle accidentally ran down and killed a child during a road march through Lithuania in early June, Reuters reports, citing the rumor as an effort to undermine the Saber Strike 2018 joint military exercises currently underway in eastern Europe.

A screencap of the Lithuanian news article alleging a U.S. Army Stryker killed a child during a road march as part of Saber Strike 2018Screenshot via Gelezinisvilkassite

While other Lithuanian officials have publically debunked the rumor as part of a broader disinformation campaign, Task & Purpose reached out to U.S. Army Europe and U.S. European Command for comment.

“The only injuries from the accident were military, no civilians were involved,” U.S. Army Europe public affairs director Col. Kathleen Turner told Task & Purpose in an email. “The report of a civilian child killed was an erroneous report that was debunked by actual Lithuanian media outlets.

“I prefer not to comment further on that report so we don’t bring additional attention to it,” she added. “If we keep talking about, some people may actually think it happened and question the factual reporting that has taken place.”