In what can only be described as “failing up,” a colonel who was fired after his security forces airmen unit... 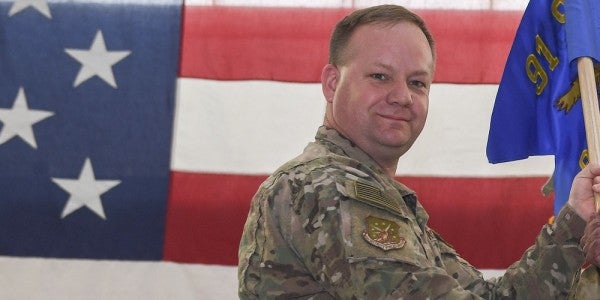 In what can only be described as “failing up,” a colonel who was fired after his security forces airmen unit lost a machine gun and grenades while guarding nuclear missiles is headed to a new job at Air Force Special Operations Command.

When asked why Beers is taking on this new post after being relieved of command, Farr replied: “We are fully confident in the colonel's ability to manage our security forces and civil engineer programs for the command.”

On May 23, Beers was canned as commander of the 91st Security Forces Group and Chief Master Sgt. Nikki Drago was fired as the unit’s superintendent after the airmen under their command lost a box of 40mm MK 19 grenades, which fell off the back of a military vehicle, and an M240 machine gun was found to be missing during a weapons inventory.

The 91st Security Forces group falls under the Air Force’s Global Strike Command, which has purview over all of the service’s nuclear missiles and bombers. Stationed at Minot Air Force Base, North Dakota, the unit is responsible for guarding 150 nuclear missiles and 15 missile alert facilities at the 8,500 square-mile missile complex.

In the wake of the machine gun and grenades SNAFU, Global Strike Command ordered a weapons inventory for all airmen.